Almost 100 years later, musicians still must go through this archaic system of intermediaries developed before the advent of the internet, where the artists lose up to 86% of the proceeds from their music. 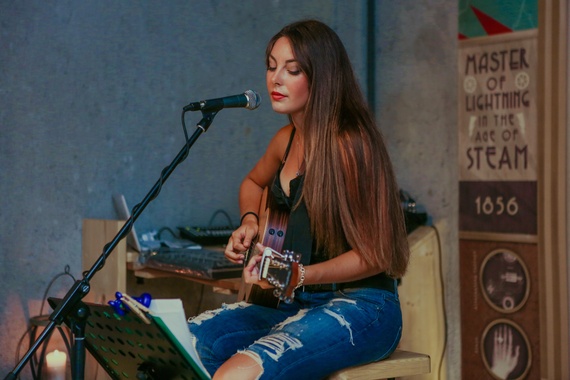 This could all change under blockchain-based platforms -- clever pieces of code called smart contracts, and their capacity to link and act upon data.

This is the promise that blockchain technology is making by giving artists more options to monetize their work. Musicians can now embed their music directly into the blockchain and get paid immediately in any cryptocurrency of their choice.

Blockchain is a new technology. It allows anyone to set up a distributed ledger based on open source software that can confirm and register transactions without the need for a central authority.

On a blockchain, records are kept of all transactions that occur across a peer-to-peer network. With this technology, strong cryptographic methods validate and chain together blocks of transaction data.

The ledger is spread across nodes (networked computers) that are available to everyone and owned by no one. The information comes in the form of unchangeable, digitally recorded data in packages we call blocks.

According to William Mougayar, author of The Business Blockchain, blockchain technology is:

The problem in the recording industry

In 2015, with a total revenue of US$15 billion, the recording industry had its first significant year-on-year growth in nearly two decades. Digital became the primary revenue stream for the first time when digital revenues overtook those of physical formats.

There is a serious lack of transparency in the music industry.

This sounds like great news. However, artists rarely come out with a big payoff. A complicated web of ownership has created one of the worst systems imaginable, making it impossible for musicians and other people involved to get paid their fair share.

Streaming services like Spotify and user upload platforms are rapidly growing, but fail to provide the musicians a sustainable and reasonable share of the profits. Although music consumption is exploding globally, it is increasingly difficult for many artists to make a living with their work.

According to Rethink Music:

"Significant funds are often paid to the wrong party, while large pools of royalty revenue end up outside the artist's reach in a so-called "black box" - where rightful owners of royalty revenue cannot be accurately identified because of a lack of an industry-wide system for tying usage to ownership"

Peer lending and crowdfunding have already greatly changed different industries. With the cryptosphere, there are now new ways of funding projects and selling products. It places all necessary tools directly in the hands of the project manager.

Without centralized databases and third party governance structures, all crucial decisions can be made by an artist himself, his manager, an artist's team, or even via crowdsourcing in collaboration with fans.

By using blockchain technology, artists can go a step further than just uploading, marketing, and selling their work over the internet.

A blockchain is a public record of all transactions that have ever taken place in a currency (for example bitcoin or ethereum cryptocurrency).

Musicians embed their music into the blockchain and get paid directly in the currency of their choice.

This revolution is explained in greater detail by Edith Suarez of CNN: "Music is placed in the decentralized server, then each song is embedded with a piece of code (meta information) [...] [When people download] a track with a cryptocurrency, a payment is automatically sent to anyone involved, be it the writer, the producer, the singer, as well as many others."

According to Phil Barry, the founder of Ujo Music, it's simpler with this type of technology. "I don't need 50 people in 50 different countries to come and collect money from me," he says. "That's one of the advantages of an automated, digital, blockchain-type of system."

Instant and fair distribution of revenue

Some have begun to harness blockchain technology for the music industry. The platform Revelator, for example, tracks digital assets and gets royalties of any size to those owed as fast as possible.

If you buy from Apple's iTunes store, a self-executing smart contract on a blockchain will activate. Owned dues are then divided according to the programmed smart contract, and the revenue is shared instantly via the cryptocurrency.

The money will no longer come in lump sums. Instead, it will be instantly distributed to each rights holder.

According to Benji Rogers, founder of Pledge Music

I think that digital scarcity and digital permanence will be two of the major changes that Blockchain will bring to the music industry. It will help with first with registration, then data verification, payments and then scale beyond that.

With bitcoin (or by creating your own cryptocurrency on top of the bitcoin blockchain) and some technical know-how, it is possible to implement an elegant solution. This is done not only by embedding a proof of ownership for the lyrics and melody of a song in the blockchain, but also for cultivating direct relationships with fans, offering special privileges, and providing complete transparency to future clients and partners.

What's Around The Corner

Investing directly in favorite artists becomes a reality for retail investors and fans. Networked music production pools based on smart contracts as well as creativity, knowledge, and skill-sharing cooperations backed via cryptocurrencies on the blockchain are just about to go mainstream.

Federated production teams and other forms of collaboration and sourcing based on cryptocurrencies are becoming easier to implement and manage. Blockchain in the music industry is going viral like a hit song and propagates its magic from the artist to the music lover (and back).

Like any industry that is encumbered by inefficient intermediaries, the music industry will be disrupted by new developments in technology and governance.

Blockchain technology is transformative, but whether a shift to a networked record industry actually comes to pass in a short time frame is another question entirely. The ball is now in the courts of the big giants. Do they adopt blockchain or ignore it? Time will tell.

The reality is, blockchain technology is here to stay, and it's going to ruffle up a lot of industries in many different ways.