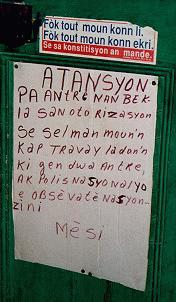 Nicaragua and Haiti are the two poorest countries in the hemisphere and, not coincidentally, the two perhaps most damaged by family dictatorships and foreign intervention. But they don't share a common language or colonial history, and my impression is that most people in each know little of the other.

Over 25 years of involvement with Nicaragua as a journalist and volunteer, one of the accomplishments of the 1979 to 1990 revolutionary period that most impressed me and seemed a good example for the region was the 1980 literacy campaign.

I wanted to introduce the Nicaraguan experience to Haitians and raise the question of whether Haiti might benefit from a similar initiative. So I wrote this piece in French for a Haitian online news agency, and translated it into Spanish for a Mexico City-based site of Latin American news and analysis. My English translation follows.

A literacy campaign for Haitians?

Across the Haitian political spectrum, education has emerged as a central theme in plans for reconstruction and future development of the country.

In his inaugural speech, President Michel Martelly proposed providing free education for all children. And former President Jean-Bertrand Aristide, when he returned to Haiti recently, said that he hoped to make education the main focus of his efforts.

The education of children is rightfully their primary concern. But in a nation where 55 percent of adults cannot read or write, according to the United Nations Educational Social and Cultural Organization (UNESCO), the potential value of a large-scale effort to increase their literacy rate is worth considering as well.

While many developing countries have conducted national literacy campaigns, perhaps the most relevant experience comes from a sister nation in Central America. Nicaragua, like Haiti, lived through a long occupation by the U.S. Marines in the first part of the last century, followed by a brutal and long-running family kleptocracy closely allied with Washington. The Somozas ran Nicaragua as their personal fiefdom from 1936 until 1979. They looted the country, strangled its political life and left it in ruins, with profound poverty and an illiteracy rate of about 50 percent.

After an insurrection overthrew Anastasio Somoza Debayle, the first major initiative of the new government of the Frente Sandinista de Liberación Nacional (Sandinista Front for National Liberation) was a national literacy campaign. In 1980, less than a year after the end of the war, the FSLN recruited some 60,000 students and 30,000 teachers, mainly from the cities, to volunteer to venture out across the countryside and teach over 400,000 people to read and write. Overall, the campaign involved over a fifth of the population of the country. Sixty percent of the volunteers were female, as were 50 percent of the learners. Within five months, the initiative succeeded in reducing illiteracy by two-thirds, to roughly 13 percent.

The campaign was based in part on the pedagogy of the Brazilian educator Paulo Freire, who served as advisor. He emphasized the importance of the active engagement of students in reading, writing and examining their own lives. The learning was bi-directional and often life-changing. For many urban volunteers it was their first personal experience of the crushing poverty endemic in the countryside, and it inspired some to become more involved in various kinds of education.

Because of their large scale and inclusiveness, the literacy efforts went viral, becoming a major theme of public discussion and touching the lives of perhaps the majority of Nicaraguan families. Friends who experienced the moment have described to me the sense of excitement and national pride that the campaign aroused. With the venture, the new government made a strong statement about its priorities and goals.

At the end of the campaign in September 1980, UNESCO bestowed the "Nadezhda K. Krupskaya" Prize on the people and government of Nicaragua for their achievement. Then-General Director Amadou M. M'Bow praised the campaign as an "exciting experiment from both an ethical and pedagogical perspective."

"The crusade," said Father Fernando Cardenal, the national coordinator, "is not a story of complicated techniques or complex cost-benefit analysis; it is a story of people and the extraordinary potential for liberation and creation that exists within nations."

Many other countries in Latin America and the rest of the world have conducted similar large-scale literacy programs. From these, a deep body of understanding, materials and best practices has evolved, of which UNESCO is an important repository.

In Haiti, as in Nicaragua, a campaign big enough to reach critical mass could help reinforce the human rights and raise the productivity of the majority of Haitians.

Those who cannot read or write cannot participate fully in political, social or economic life. A campaign spanning the whole territory of Haiti could welcome more than half of all Haitian adults into the public debate by giving them the tools to make their own needs heard and improve their own lives. Such an undertaking would encourage the growth of human capital, human capacities and democratic freedoms.

Haiti has conducted adult literacy programs before under both Aristide governments, which were cut short by coups. From 2001 to 2004, 300,000 people took part, according to Canadian political philosopher Peter Hallward, reducing the adult illiteracy rate from 65 percent to 45 percent.

Since 2007, UNESCO and the Spanish government have been working with the Haitian State Secretariat for Literacy on a small project in the South-East department. Around 5,000 youth have received training in literacy, professional skills and gardening. The project has been implemented within the framework of LIFE (Literacy Initiative for Education), UNESCO's global campaign to overcome illiteracy.

The numbers are tiny relative to the estimated 3 million illiterate Haitians. The program's budget was cut radically from original estimates, and political support was meager, according to news reports. But then State Secretary for Literacy, Carol Joseph, told the Haitian daily Le Nouvelliste that 2,200 new literacy centers each capable of serving 25 students were established across seven of Haiti's 10 departments. These could serve as the locus of future efforts.

In the wake of last year's earthquake, Haiti has one resource Nicaragua did not: a pool of potentially many thousands of educated people whose jobs and homes were destroyed and who are still stuck in camps for displaced people. I met a few of them while volunteering in a camp in May 2010. In those same camps are many poor people who don't have literacy skills.

In this situation, paying literate people to teach reading and writing to their less-educated neighbors would be the lowest-hanging fruit. Although cash-for- work programs that pay people to dig ditches can be useful when ditches need to be dug, drawing on people's higher-level skills would be a more productive use of the human resources that already exist in Haiti.

Beyond the camps, broad initiatives in rural areas could reach the largest numbers of people who need to learn to read and write. Recruiting urban students and teachers (as well as camp residents) to teach literacy in the countryside would also represent a modest step towards decentralization. Exporting expertise from the cities would strengthen rural communities and economies. A massive enough campaign, coupled with other incentives, could help ease crowding in the metropolis.

In a country riven with deep historic divisions between social classes, participation could increase understanding of life on the other side of the social divide, and open a path towards reconciliation between alienated sectors of society.

Nicaragua's campaign was mainly voluntary and cost only about US$ 30 per person made literate. Haiti, however, might do well to pay those who teach with some of the international aid for education, thus generating employment and domestic demand in the bargain.

Although childhood education and adult education might seem to be competing priorities, they are in fact mutually reinforcing. Adult literacy programs encourage parents to respect education and demand it for their children (although in my experience many Haitians already show a reverence for education). Such campaigns can also serve as training grounds for potential teachers who afterwards could be recruited into formal youth education.

It is clear that these efforts must be part of a long-term literacy strategy integrated with national and local plans for education, so that people don't slip back into illiteracy. They must also be coordinated with development initiatives that enable people to use their newfound capacities to improve their economic conditions.

Here, Haiti could also learn from the difficulties of Nicaragua in sustaining its progress. The literacy gains of the early 80s were eroded later in the decade by the Contra War and resulting economic crisis. Follow-up programs continued through 80s, but were then defunded by subsequent governments. Over the past few years, however, a newly elected Sandinista government has begun large-scale literacy efforts again.

Historically, Latin American dictatorships and oligarchies have reflexively repressed popular education. But unless, like them, one prefers a 19th-Century model of savage capitalism built on the scarred backs of an undernourished, uneducated, "flexible" workforce, literacy for farmers and workers must be understood as a key to productivity growth in any modern economic model of development. It lays the basis for further education and stimulates the growth of domestic income and demand. It enables small farmer-driven approaches to rural development, along with strategies for industrial and technological growth that add increasing value.

Beyond human capital, however, literacy also serves as a catalyst for the growth of further human capabilities and freedoms. It is a necessity to enable people to participate in democracy and other forms of public life in any meaningful way. And at a more personal level, it is a basic element of self-respect and a portal that opens out onto the global stage.

In Development as Freedom, Nobel-laureate economist Amartya Sen investigates the various ways in which education is important: "If education makes a person more efficient in commodity production, then this is clearly an enhancement of human capital. This can add to the value of production in the economy and also to the income of the person who has been educated. But even with the same level of income, a person may benefit from education -- in reading, communicating, arguing, in being able to choose in a more informed way, in being taken more seriously by others and so on."

The recognition of the importance of human qualities in promoting economic growth, he asserts, "tells us nothing about why economic growth is sought in the first place."

"If, instead, the focus is, ultimately, on the expansion of human freedom to live the kind of lives that people have reason to value," he concludes, "then the role of economic growth in expanding these opportunities has to be integrated into that more foundational understanding of the process of development as the expansion of human capability to lead more worthwhile and more free lives."

Peter Costantini is a journalist and analyst based in Seattle. He has covered Haiti, Nicaragua and other parts of Latin America for the past 25 years.