I've lived in Israel for almost a decade and was beginning to think that environmentalism in this part of the woods was a Jewish thing. Israel is bursting at the seams today with NGOs fighting for fair trade, climate change, urban planning and pollution, with a little, but not so significant input from the Israeli Arab sector, whose majority is Muslim. 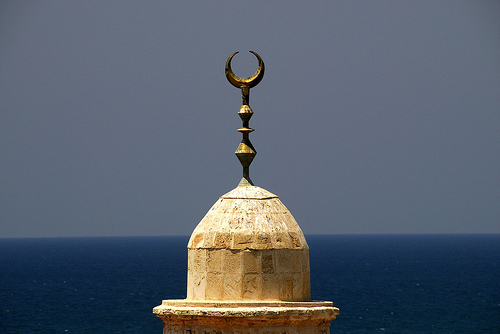 The Middle East in general has a lot of catching up to do with the West in environmental terms, and Israeli imams -- who are Muslim clerics -- may play an integral role in shaping policy, education and possibly the advancement of clean technology in the entire region. Or so I, at least, would like to hope.

Starting off with baby steps, earlier this month fifty Muslim Israeli imams gathered in Umm el-Fahm, Israel to learn about how they can raise environmental awareness among their Muslim communities. A first of its kind, the event was organized by the long-term environmental and social activist Mohammad Rabah Aghbarieh. According to Green Prophet, the conference was an important stepping-stone for improving environment quality in Arab Israeli towns, which lag behind Jewish ones. And, yes, besides a couple mixed cities such as Jaffa and Akko (or Acre as it's sometimes called), Israeli cities, towns and villages are pretty much segregated by religion.

With cooperation from Israel's Ministry of Environmental Protection, Rabah Aghbarieh prepared a kit for every imam to take home, which included environmental guidelines to be hung in the mosque, while sticker handouts stated that environmental protection is a religious commandment. A special educational CD containing sources from the Koran and hadith which support environmental issues was also given the imans, and is possibly the first of its kind in the world used for educating Muslim congregations.

In America, faith-based environmental education is common in the Christian and Jewish communities, but for Muslims, much more can be done -- and hopefully on a national scale.

Speaking of America's intersection of faith and the environment, just this week I met Richard Cizik, who is VP for Governmental Affairs of the National Association of Evangelicals, a community of about 27 million Americans. In Jerusalem as part of a one-week Project Interchange trip, I was pleasantly surprised to hear that Cizek supports education on global warming and that environmental issues are close to his heart. His policy on global warming's so cool, that he was featured on the enviro website Grist.

See of video of Cizik on YouTube
Do you think there is place for faith in the environment? Or is the environment a new religion? Some people who read TreeHugger, a popular green blog where you can normally find me writing,
believe that there is no room for religion and the environment
but I strongly disagree. Apparently an iman from Texas believes so too.To hear an audio clip of an Islamic sermon (khutbah) by Imam Zia ul-Haque who is based in northern Texas about the connection between Islam and the environment,
just follow the link
(take note that the clip starts in Arabic, and English follows). Now back to my original thread. Relations between Israel and its neighboring countries and territories -- Lebanon, Palestinian Authority, Syria, Jordan and Egypt -- are icy at the best of times, and downright volatile at the worst. But Middle East neighbours could bode well if they took Israel's open hand and struck some R&D and business deals in the
areas of water
, advanced
agriculture
and
solar energy
. I attend business conferences in Israel on a regular basis and while countries from the Far East and Africa are well represented, I never see anyone from Arab states. Why can't we just all be friends? I am banking on Israeli Muslims to pass on the "green" message to their communities. They will be our Middle East peace brokers when it comes to environmental issues.

More on Israeli clean technology
Solar Thermal Test Site Opened by Brightsource in Israel
Israel and Germany: It's All Water Under the Bridge
Solarized in Israel's South

Karin Kloosterman is the founder and editor of Green Prophet www.greenprophet.com, the leading environment news site in the Middle East. For tips and inquiries email