By Hugo Balta - President of NAHJ and a coordinating producer for ESPN and Axel Caballero, Executive Director for NALIP and founder of Cuéntame.

As Latino filmmakers and journalists, we understand that the stories we tell matter.

They play a critical role in defining our culture and help people make sense of the world we live in.

But too often, the stories that are being told on the local news, on cable outlets or on the big screen about Latinos reinforce dangerous stereotypes to the detriment of our community.

It is why our organizations have long pressured the industry to hire more Latinos to ensure our stories are being told. It is also why we are deeply troubled by the impact of a recent court decision on our online free speech rights.

Earlier this month, a federal court struck down the Federal Communications Commission's open Internet rules, which were intended to prevent Internet Service Providers like Verizon and AT&T from blocking content or discriminating online.

Now these companies are free to interfere with Web traffic.

This is why we are calling on our community to sign a petition from Presente.org that asks the FCC to take action to protect Net Neutrality.

We understand the open Internet provides our members and community with the means to speak for themselves, which has been difficult to do in the mainstream media.

Latinos own few broadcast stations or major entertainment companies. It has made us dependent on large media companies to tell our stories. And if you turn on your television, or have gone to the movies recently, you can see why this has been a problem.

Media coverage of immigration often marginalizes undocumented immigrants. When Latinos do appear in major movies, we tend to be portrayed as gardeners, maids, or criminals.

This is hardly surprising since Latinos remain woefully underrepresented in the media and entertainment industries. Despite making up 17 percent of the U.S. population, only 4 percent of journalists working at daily newspapers are Latinos and 5.5 percent working at English-language TV stations. Meanwhile, Latinos remain underrepresented as actors on primetime TV shows.

In recent years, our members have turned to the Internet to tell the stories that are often ignored by the media. Actress, producer and writer Ruth Livier created the Web series Ylse and become the first person admitted into the Writer's Guild for her work in new media. Diane Alverio, former NAHJ president, founded CTLatinoNews.com, an English language website that covers issues impacting Latinos and the contributions they are making in Connecticut, often countering harmful misconceptions and stereotypes.

But the court decision will now make it harder for our members to tell those stories since ISPs like Verizon can now block Web content and sites that are relevant to our community. 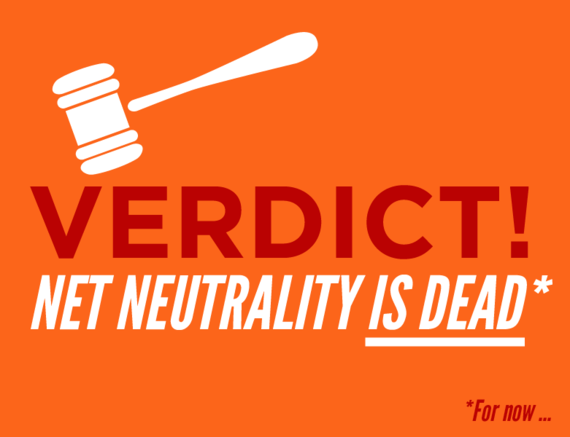 Despite the ruling, the FCC still has the power to adopt strong Network Neutrality protections. The court decision did not strike down the FCC's ability to adopt Network Neutrality rules. It just struck down the legal rationale the commission adopted in defining broadband services.

As the two largest organizations representing Latino journalists and filmmakers, we are calling on the FCC to take quick action to reestablish its legal authority and pass strong Net Neutrality protections.

We urge our members and our community to sign the petition from Presente.org that calls on the FCC to preserve Network Neutrality.

It is critical for the voices of our community to be heard on this issue, otherwise there's a good chance they will be silenced online on all other issues.

Executive Director of NALIP & Founder of Cuentame and Metafora Politica