In Michael Moore's new film Capitalism: A Love Story, Ronald Reagan slaps a woman so hard across the face that there were audible gasps in the audience. Granted, this was an old film clip and Reagan was "acting" but Moore was making the point that along with cozying up to Wall Street in a manner heretofore unseen, Reagan also reversed the forty year Republican position on the Equal Rights Amendment, dashing the hopes of women across America.

The women's movement had been in full adrenaline overdrive for almost two decades and federally protected equality had been tantalizingly close when, in 1982, the ERA fell three states short of ratification. I believe in that moment the country delivered a body blow to both the movement and the collective psyche of the American woman that we are still reeling from. Twenty-seven years later, eighty-six years after Alice Paul drafted it, women in the United States of America still do not have equal rights under the constitution.

Well, I'll admit I'm not a constitutional lawyer or a feminist scholar. I'm not even a shrink or a psychic. But I've got something of a hunch about why women, as a group, are unhappy. We've done a great job indoctrinating ourselves to put others first -- even in the "macro" abstracted realm of equal rights. If this were any other group being denied equal rights we would be out there fighting for justice tooth and nail, but because it's us... gosh, we don't want to make a fuss -- we're fine, really, we'll get by. But, ladies, by dropping the pressure on our government to provide the majority of its citizens with the protection of equal rights under the law, we women are complicit in this unjust status quo. By allowing this injustice to persist we are betraying not just our sex but also the ideals this country was built on.

Here is the language of the ERA: "Equality of rights under the law shall not be denied or abridged by the United States or by any State on account of sex. The Congress shall have the power to enforce, by appropriate legislation, the provisions of this article. This amendment shall take effect two years after the date of ratification."

Am I really in the minority in finding this modest paragraph self-evident and indisputable? I find alternately surreal and deeply disturbing that there were people out there who thought it would be the end of civilization should the ERA pass, and actively torpedoed it. Why is this still even a question? Aren't all people supposed to be equal in the U.S.? Aren't women people? What on earth is going on here?

The answer lies, as with so many areas of trouble and decay in our society in the calculated and deliberate obfuscation in place, either legal or institutional, that creates the Orwellian nightmare that is the new America. Sure, everyone should be equal, and they are, we are assured; there are other laws protecting women, states laws, Title VII, Title IX, the Lily Ledbetter Fair Pay Act of 2009, on and on, it doesn't need to be federal - this is not the time! Don't we have enough problems to deal with in this country? Why bring the big bad Federal Government in on this? It's working fine the way it is! But here's the thing: upon closer scrutiny, it's not.

The common wisdom to leave the protection of women's rights to the states and/or rely on the Equal Protection Clause of the 14th Amendment in cases of sexual discrimination leaves justice for women in the hands of a constantly shifting jurisprudence. And we know how quickly things can change in that milieu - Ashcroft, anyone, Gonzales? There are so many loopholes and gray areas in relying on this patchwork of laws that the possibility of discrimination, and legal protection for those engaged in it in the private sector, is practically assured (see below for footnote on excellent article).

"Properly interpreted, an equal rights amendment would be a permanent guarantee of basic human rights for women," said previous NOW President Kim Gandy. "With such an amendment to the Constitution, our fundamental rights and liberties would no longer be subject to the ever-changing political cycles."

Simply put -- are women, should women be equal or not? Not implicitly equal. Not equal in New York state but not so much in Georgia. Not equal in every area as compared to men. Just equal, plain and simple? If the answer is simply yes, then why oh why is passing this amendment such a big deal? If the answer is no, women are somehow less equal than every other group protected by the US Constitution - let's just get that out there on the table. I would very much like to see which of our Senators and members of Congress are willing to stand up and make that statement to the one hundred and fifty two million of us of the "gentler" sex.

We must stop skirting the issue and make an unequivocal statement that eliminates misinterpretation. We must, collectively, make this statement: Equality of rights under the law shall not be denied or abridged by the United States or by any State on account of sex.

On July 21st of this year, Congresswoman Carolyn Maloney reintroduced the ERA, as has happened each year since 1982. This year, however, it needs to be ratified. Let's give her the support she needs by pressuring our representatives to join with her in co-sponsoring it and put it to a vote. I'd say eighty six years is just about long enough, wouldn't you?

Call it my woman's intuition, but I think that might make us happy. 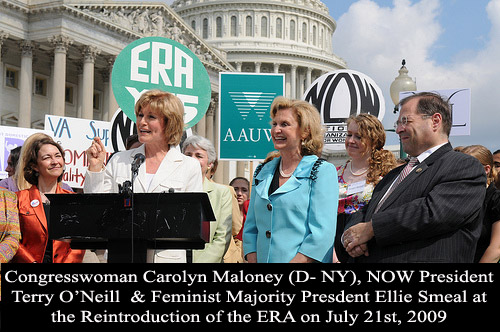