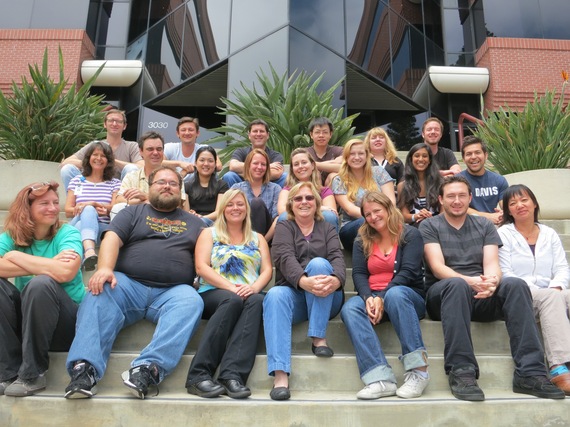 Loring (front row, center) with the Loring Lab Group at the Center for Regenerative Medicine

Jeanne Loring and her Scripps Research Institute colleagues transplanted a set of cells into the spinal cords of mice that had lost use of their hind limbs to multiple sclerosis. As the experimentalists expected, within a week, the mice rejected the cells. But after another week, the mice began to walk.

"We thought that they wouldn't do anything," says Loring, who directs the Center for Regenerative Medicine at Scripps. But as her lab has since shown numerous times, and published in Stem Cell Reports, something that these particular so-called "neural precursor cells" do before the immune system kicks them out seems to make the mouse better.

The cells Loring's team used are derived from induced pluripotent stem cells, which are mature cells, such as skin cells, that have been coaxed with a combination of chemicals to return to an earlier stage of development.

Induced pluripotent cells, also known as iPS cells, pose a number of opportunities for medicine. For instance, Loring is using iPS cells from Parkinson's disease and multiple sclerosis patients to reconstitute cell types that may be damaged in people with those conditions. She is also using them to test how certain drugs or treatments may affect damaged cells in people with conditions such as autism spectrum disorders.

Loring says no viable long-term treatments exist for the diseases her team has been working on, including Alzheimer's disease, Parkinson's disease, and multiple sclerosis. "That's where the need is," she says.

The neural precursor cells that Loring has been using in the mice with MS are young cells that haven't quite gotten to the point of being nerves yet. Only certain types of these cells have such a dramatic Lazarus-like effect on the affected mice, but Loring's team can readily identify them based on DNA analysis.

Even so, they're not yet ready to treat human MS patients with the approach, she says. First, the researchers want to identify what the cells produce -- a protein, perhaps, or a set of proteins -- that allows the mice to walk.

For other diseases, however, researchers are closer to being ready to transplant working versions of reprogrammed cells into sick people.

For instance, Loring is exploring whether it's possible to reprogram skin cells from patients with Parkinson's disease so they turn into iPS cells and then into working dopamine neurons, which are the cells affected in the disease.

It seems to work in animals: Loring's lab has transformed skin cells from eight human Parkinson's disease patients into iPS cells and transplanted them as neurons into animal models.

A local Southern California Parkinson's disease association has funded the research so far. Now Loring and colleagues are seeking additional funds to move through regulatory approval and toward the clinic.

Meanwhile, iPS cells separately suggest a way to test how disease-affected cells may or may not respond to treatment in diseases like autism, by in effect creating "dummy" cells on which drugs could be tested.

After making iPS cells from the cells of fragile X syndrome patients, a genetic condition that often co-occurs with some forms of autism, Loring's lab turned them into cortical neurons -- cells that she suspects don't develop as they should in people with the disorder.

Indeed, the cortical neurons her lab grew from those iPS cells looked different than other cortical neurons and suffered delayed development. These neurons, she explains, could be used to test different molecules and compounds to see whether drugs could treat cells affected by autism.

This sort of approach, in which so-called "derived cells" are used for drug screening, Loring said, is the likely way that iPS cells will first be used in medicine, especially as more and more people have their genomes analyzed. Treatment with reprogrammed iPS cells will take longer to develop.

Loring says she hopes soon to be able to set up simple assays "that will allow us to find out what sort of drugs will work for people with particular genotypes." That could offer a significant boost to drug development. iPS cells are an important new opportunity to attack diseases that otherwise have vexed researchers and doctors for decades.