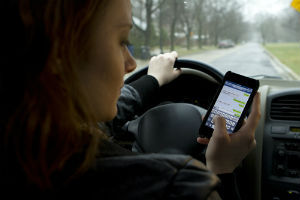 Most of us depend on our cellphones for nearly everything. We can keep in touch and share what we are doing with friends and family, get recommendations and driving directions on places to go and things to see, and basically find out anything we need to know at the touch of a button.

The more we depend on our phones, the smarter these phones become and the more developers come up with new applications to make our lives easier. While one of the downsides to smartphones is the dangerous effects using one can have on our driving abilities, using smartphones to prevent car accidents caused by distracted driving is a way cellphone technology can be put to good purposes.

More companies are investing in ways to make smartphones safer for drivers while lessening texting and driving. The potential benefits could mean the difference between life and death.

The NSC states that approximately 1 in 4 car crashes that occur in the United States each year involve the use of a cellphone while behind the wheel. In response to sobering statistics on the dangers of distracted driving, some states have implemented bans against handheld devices.

According to the National Conference of State Legislators, while Indiana is not one of 14 states that prohibit handheld devices behind the wheel, there are laws prohibiting drivers from texting and driving, as well as laws limiting the use of handheld devices for drivers under the age of 18.

How Smartphones Can Prevent Car Accidents

According to a recent Wall Street Journal article on distracted driving, the solution to the problem of cellphone-related accidents may lie in the phones themselves. The article points to a new feature on many phones called Drive Mode, which could help to limit the distractions cellphones pose to drivers, such as texting and driving, by disabling certain functions of the phone.

By eliminating the ability to text or make calls, as well as the ability to play games or use social media, the Drive Mode feature could potentially prevent distracted driving due to cellphone use, enabling drivers to better focus on the road ahead.

According to the Wall Street Journal article, the one catch to this solution is that cellphone users themselves would need the discipline to put their phone in Drive Mode prior to getting behind the wheel, and to leave it there until they reach their destination.