Congratulations! Yesterday, a Minnesota court granted your request to withdraw your guilty plea! But I'm still worried about you. At first I was sure you were straight as an arrow, framed by those determined to silence the Singing Senators, the quartet that sings truth to power whose reunion concert curiously took place a night after the sex sting. But then as the Republicans turned on you, doubt started to creep into my faith in your heterosexuality. And your recent behavior -- pleading guilty and then withdrawing your plea, resigning and then reconsidering -- suggests a strong bi-curious tendency that worries me.

But it's not too late to get your life back on track! You can't do it alone, though, and I think I know just the person to help you.

So you can trust his advice and follow his example. After Mike Jones came forward and announced he'd had a three-year long, sex- and drug-filled relationship with Pastor Ted, Haggard confessed to being "guilty of sexual immorality." After being fired from the New Life Church, Ted attended a 12 step "spiritual restoration" program and emerged, a mere three weeks later, "completely heterosexual." And you can too, Senator Craig! Who knows how to deal with your particular dilemma -- trying to save America from the sinning gays, but kind of sinning yourself --better than Ted? He's been there, done that! And, Ted, along with his wife, is going back to college for a degree in counseling, which will make him even more equipped to save others, starting with you!

Before Ted can help you, though, you need to help Ted. You see, as he explained in a recent letter, "It looks as though it will take two years for us to have adequate earning power again, so we are looking for people who will help us monthly for two years." He cannot survive on the $115,000, plus a $85,000 bonus he made last year, the $138,000 in severance pay through 2007, and the royalties from his literary oeuvre, which includes which The Jerusalem Diet:The "One Day" Approach to Reach Your Ideal Weight--and Stay There 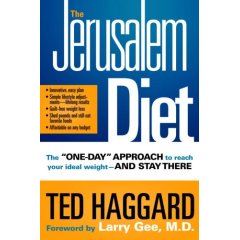 and From This Day Forward: Making Your Vows Last a Lifetime, which he co-wrote with his wife, Gayle. What is Ted supposed to do? Sell his $715,000 Colorado Springs home? I don't think so.

According to Ted, any financial help be will "rewarded in Heaven." You can make a tax deductible donation to Pastor Ted through the organization Families With A Mission. They'll receive 10 percent of the donation, but that's OK because they are a worthy cause, too, directed by Paul Huberty, an upstanding patriotic military man who was married with three children when his career was cut short by multiple sex crimes convictions, including sexually assaulting a minor and "dishonorably fondling his genitals." It's clear Huberty has spiritually recovered because the outgoing message on his answering machine says "God Bless You." So what are you waiting for Senator Craig? Donate today! In turn, heaven aside, you will have the best earthly guide to get your life back on the straight and narrow. 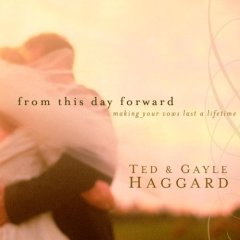 Now Larry (may I call you, Larry?) the liberals, as usual, have it all backwards. They think you and Pastor Ted are hypocrites. They don't mind that you're gay, they mind that while you preach homophobia on the one hand you practice homosexuality on the other. Well, I don't think you two are hypocrites. I think that when you're carrying the moral weight of the world on your Atlas-like shoulders, shielding America and our values with one hand, and spearing the homosexual agenda with another, it's easy to slip up with your other body parts. So, whatever you do, Larry, don't come out of the closet or abandon your committed stance against the gays. Straighten yourself, and America, out one anti-gay bill at a time.