By now you've probably heard of the "Cindy Sherman of the Monkey World," as we dubbed her recently. While working in an Indonesian national park, British nature photographer David Slater had his camera purloined by a clever macaque monkey who took several self-portraits, apparently fascinated by her own reflection in the lens. The exceptionally charming images that resulted caught the eye of Britain's Daily Mail and won the cheeky monkey fans around the world, as well as "calling into question notions of personae, monkeyhood, affect, and the history of photography itself," as we put it. 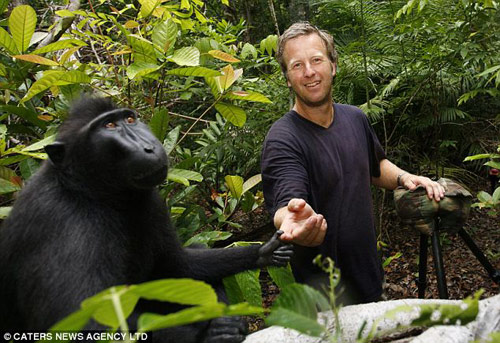 We were being tongue-in-cheek, but as it turns out the images have indeed called the very nature of photography into question. The pics are now at the center of a lively debate about copyright, with implications not just for Slater but for the entire world of animal art (yes, there is a world of animal art).

After hearing about the accidental monkey masterpieces, the Web site Techdirt posted a short essay musing on the fact that several of the images bore a credit line attributing them to the U.K.-based Caters News Agency, for which Slater works. Copyright is generally held by the person who takes the picture, and since the author was in this case the monkey -- Slater explicitly stated that he had no hand in creating the image -- Techdirt wondered by what basis Caters could have acquired the copyright.

Someone from the news agency promptly wrote to Techdirt to request that the images be removed from the site -- without, however, addressing the fact that the original post had specifically challenged Caters's legal right to own the monkey pics at all. "These images are being used without David's or our permission, therefore can I ask you remove these images from your site immediately," went the letter. Techdirt writer Michael Masnick replied in an email, asking what the legal rationale was for the request, and claiming "fair use" to boot. 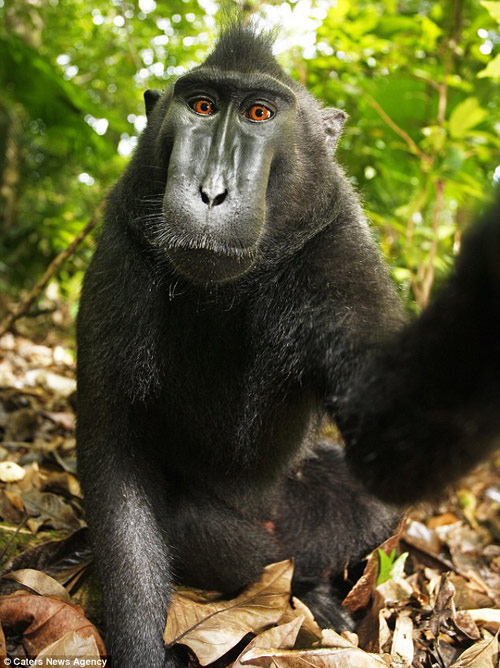 The macaque monkey took the photos herself, without the assistance of human hand / Courtesy Caters News service in solidarity with Techdirt

Caters News Agency fired back: "Michael, regardless of the issue of who does and doesn't own the copyright -- it is 100% clear that the copyright owner is not yourself. You have blatantly 'lifted' these photographs from somewhere -- I presume the Daily Mail online. On the presumption that you do not like to encourage copyright theft (regardless of who owns it) then please remove the photographs."

Techdirt adduced the testimony of a number of legal experts to show that Caters's understanding of copyright here is shaky. More importantly, in a followup post, the Web site goes deeper into the intricacies of copyright law, concluding that it seems fairly clear on the fact that only humans get copyright, whether in Indonesia, the United Kingdom, or the United States. "In order to be entitled to copyright registration, a work must be the product of human authorship," says a quote by the U.S. Copyright Office. "Works produced by mechanical processes or random selection without any contribution by a human author are not registrable."

All of this leads to big questions for the world of contemporary art, where works generated by "mechanical processes" and "random selection" are established parts of the vocabulary (see Cory Arcangel's current show at the Whitney) -- as are art projects that involve snapshots taken by a third party, for that matter (Nikki S. Lee). But never mind that, our question is: What does this mean for Cooper the Cat? The Seattle-based feline art phenomenon has built an empire -- or really, his owners have built an empire -- on his photographic snaps, made by a collar-mounted camera that automatically takes a picture every 10 minutes. Unframed photos by Cooper sell in $145 dollar range, and he even has a "Cat Cam" book of his work for sale. But now the very basis of his art practice may be called into question, all based on the actions of one goof of a monkey. Stay tuned.