If you're like most first-time visitors to Israel, you likely never heard of the Decapolis, much less places like Scythopolis or Hippos. But sometime during your stay while you're out sightseeing in the footsteps of Abraham, Muhammad and Jesus, there's a good chance you'll find yourself in the boots of Roman legions parading down the columned lanes of Scythopolis. 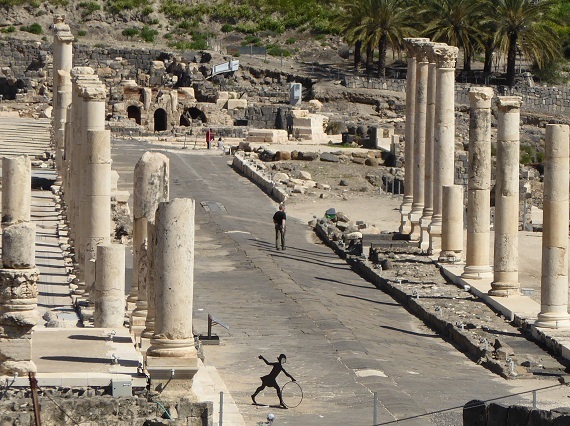 Roman columns line one of the city's ceremonial areas. Photo by Bob Schulman.

By then you've learned that Scythopolis -- known today as Beit She'an -- was the capital of the Decapolis, a league of 10 Roman powerhouse city-states mostly in northern Jordan. Among the others were Philadelphia (now Amman, Jordan's capital), Gerasa (now Jerash, Jordan's second most-visited city after Petra) and the Syrian capital of Damascus. There's not much left of the other six cities in the league including the site of Hippos, the only other one in modern-day Israel.

Beit She'an is about a two-hour drive north of Jerusalem on Route 90, past the fallen walls of Jericho, past the mysterious pyramid-shaped Mount Sartabah and along the palm groves of the Jordan Valley. "Whatever you were expecting (at Beit She'an), the actual site is much bigger and there's a lot more to see there," says tour guide Hamad Masagash. He cites an old Jewish saying, "If the Garden of Eden is in the land of Israel, then its gate is in (Beit She'an)."

Looking down on the site from a parking lot full of tour buses, you can see why this magnificent city, once home to 40,000 people, became the superstar of the league after the Roman general Pompey rebuilt it around 63 B.C. Wander around the city, down lanes lined by rows of 20-foot-high columns, and you can imagine yourself in full Roman battle garb parading to the blasting trumpets and cheers of crowds hailing the return of your victorious legion. 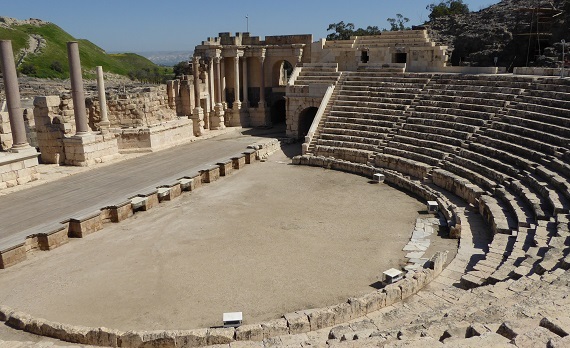 Plop down into one of the 7,000 seats in the city's hillside theater, and it's easy to conjure up Kirk Douglas slashing away at other gladiators in a scene out of the 1960 movie Spartacus. Standing 16 tiers high, the structure is rated as the best preserved Roman theater in Israel (no small feat in a country loaded with Roman theaters).

Nearby are blocks after blocks of historic buildings. You'll go through lots of memory snapping spots like the six-story-high Temple of Dionysis (the god of wine-making, said to be the founder of the city), the remains of two immense public bath houses (billed as the largest in the country) and a shopping mall as long as a football field, all liberally sprinkled with statues, shrines, mosaics, sculptures, halls, gates, arches and squares. 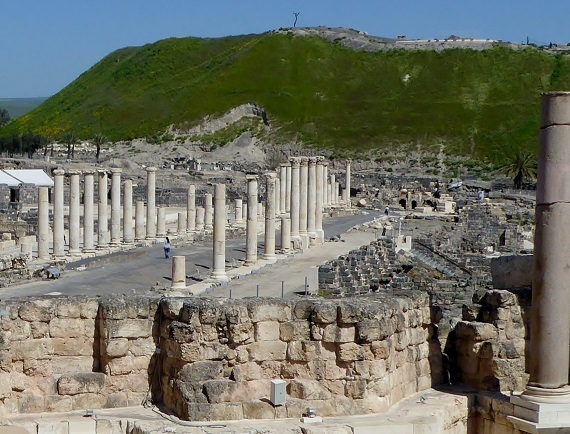 Elsewhere on the site is a huge mound called a "tell," where archaeologists dig for pay dirt marking different times in Israel's history under invaders like the Jebusites, Canaanites, Assyrians, Babylonians, Persians, Greeks, Egyptians, Seleucids, Maccabees, Romans, Muslims, Crusaders, Mamluks, Ottomans, Brits and everyone else who raised their flags around these parts over the last 5,000 years. 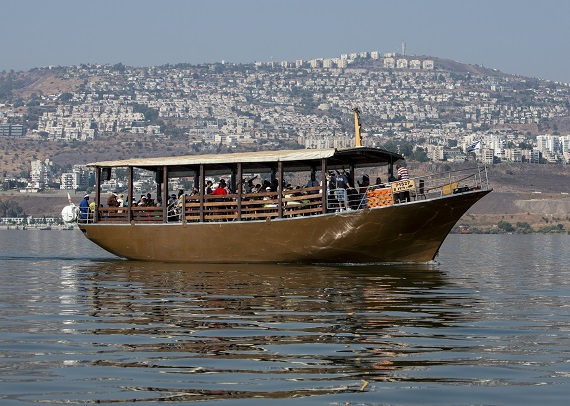 Pilgrims' boat on the Sea of Galilee. Photo courtesy of the Israeli Ministry of Tourism/Itamar Grinberg.

Like just about everyplace else in this country the size of New Jersey, many other historic and religious sites right out of the Bible are seemingly just around the corner from Beit She'an. Hop back on Route 90 and head north, for instance, and in 20 or so minutes you can be noshing on a pita full of chicken shawarma on the southern tip of the Sea of Galilee. From there, you're not far from cities dotting the shoreline like Tiberius (built by King Herod in honor of the Roman Emperor Tiberius), Tabgha (where Jesus performed the miracle of the loaves and fishes) and Capernaum (Jesus' home base during his ministry).