Southerners are downright feisty about their independence. There's a great sign at a park on the Alabama-Tennessee border which proclaims "We Dare Defend Our Rights!" Yet this rebellious streak doesn't seem to translate to independent candidates or third party challengers, who tend to fare poorly in Dixie. That may be changing as the Libertarian Party appeals to Southerners in general and Georgians in particular.

Several years ago, I attended a conference at the Citadel in Charleston, South Carolina. A presenter showed us data on how poorly independents and third party challengers have performed in the South. Texas tycoon H. Ross Perot, Illinois Congressman John Anderson, and others, have received fewer Southern votes than most other regions.

Sure there have been Dixiecrats like South Carolina's Strom Thurmond, and former Alabama Governor George Wallace, who won Southern states. But doesn't it say something that these men have failed to win more than a few of the Southern states against Northern candidates?

The Libertarian Party might be changing that, and it all started with Georgia eight years ago. Of course there was a Libertarian Party before that time. But in the 2008 election, a former Georgia Congressman, as well as a Senate candidate, changed all that. In that year, ex-Congressman Bob Barr became the Libertarian standard-bearer, faring much better than most candidates from his party in the presidential race, even though the nation followed the tight Obama-McCain contest.

The other was Attorney and CPA Allen Buckley, the Libertarian nominee for the U.S. Senate. Despite the presence of an incumbent U.S. Senator on the ticket, and an experienced State Senator, Buckley garnered enough votes to force Saxby Chambliss and Jim Martin into a runoff, and for Republicans and Democrats to seek the support of Libertarians for the tie-breaking vote nearly a month after Obama prevailed. Buckley is running again in 2016. 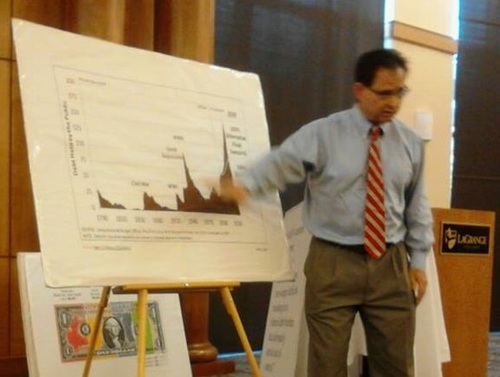 But was 2008 a fluke? The national average for Libertarian votes is about 0.5%-1% in presidential contests and 1-2% in Senate and Congressional races (I have no data for U.S. gubernatorial averages for Libertarian candidates, so I used Senate performance in the state as a proxy for statewide average). Georgia candidates ranging from Allen Buckley to John Monds to Andrew Hunt to Amanda Swafford have made or exceeded national averages, and twice (1992, 2008) thrown the Senate race into a runoff. 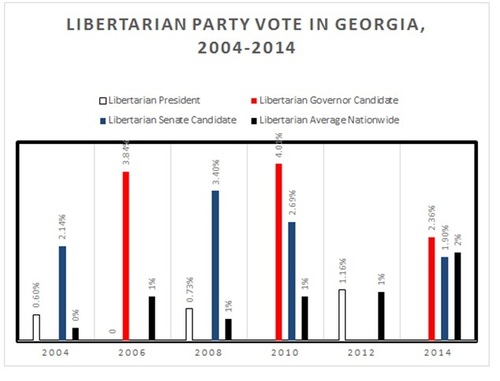 It is also noteworthy that former New Mexico Governor Gary Johnson, in getting 1.16% of Georgia votes in 2012, nearly doubled the vote total of Barr, a Georgian. That is significant. Yet despite their statewide success, the Libertarian Party faces tremendously long odds in their races for downticket races, especially the U.S. Congress. In an email communique with me, Richard Winger, the Editor of Ballot Access News, wrote the following:

"Georgia has had a 5% (of the number of registered voters) petition in place for all minor party and independent candidates for US House since 1943. In all those 73 years, no minor party has ever complied with that law, and no independent complied with it since 1964. There was one independent on in1982 but the law was suspended in 1982 because of late redistricting, for only two Atlanta districts. This is a disgrace. The Libertarian Party has carried counties in Georgia in partisan races for Public Utilities Commissioner, three times (in races between a Libertarian and a Republican). We have had races like that in which we have polled over 1,000,000 votes. We will probably have another race like that this November. It is shocking, unbelievable, that the LP is kept off the ballot for US House in Georgia when we have such voter support. Every other state has had Libertarians on the ballot for US House at least once in this century."

Imagine if the Libertarian Party got 5%, of the vote to qualify for Federal Matching Funds, which would enable the party to get more recognition, recruit more followers, and make the 2020 debates, which would only increase the visibility of the party with real national exposure. Since this is the decision of taxpayers to voluntarily contribute to the matching fund, I see no reason why this violates any Libertarian beliefs. A visit to Georgia, especially to college campuses, should help, as several students consider themselves to be strong libertarians.

"Millennials are ready for a change. We are tired of the old two party system where it seems we all lose. The other day I was discussing the current presidential election with a group of fellow college students. These individuals ranged from far left to far right, but we all had one thing in common, none of us were very crazy about the Republican or Democrat nominees. During the course of our discussion, the Johnson-Weld ticket was brought up and almost every student agreed that not only were they the best qualified, but they had the best policy as well. Millennials are ready for something different. They are ready for the third party option that Governor Johnson has to offer." 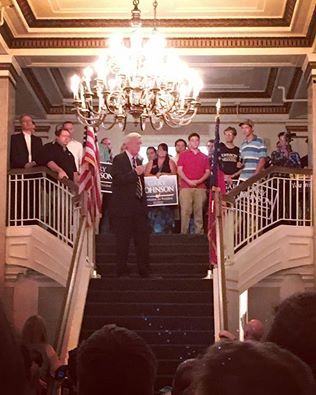 Senate candidate Buckley's visit to my college netted a fairly good turnout. Even more Georgians showed up in Atlanta to see former Massachusetts Governor William Weld, running as Johnson's Vice-Presidential candidate. Many in attendance were enthusiastic college students. It's a sign of not only the power of the Libertarian Party in Georgia, and the potential for what it could become in the region, as conservative Southerners have decide between Donald Trump and a pair of experienced former Republican governors.