President elect Trump has vowed to end "all unnecessary regulations" in the energy industry as part of an "America-first energy" plan. Much attention has been paid to how regulations, which limit environmental and human-health impacts from pollution, restrict the use of fossil fuels. However, a recent study indicated that antiquated regulations are providing a barrier for renewable energy - specifically preventing an additional $70 billion market to the already explosive growth of solar energy. 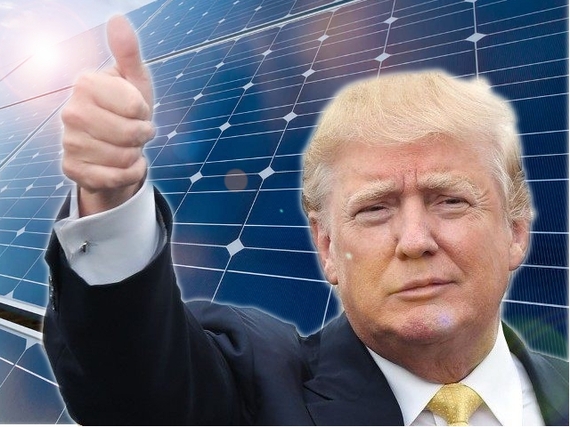 As Elon Musk, the Chief Executive Officer overseeing the Solar City - Tesla marriage, is happy to point out, solar cells are extremely cost effective. Due to the tremendous drop in costs for solar technology, solar photovoltaic generated electricity, is now regularly less expensive than grid electricity and adoption is now rising rapidly throughout the U.S. Bloomberg reports that the American solar industry had a record first quarter in 2016, and for the first time, it drove the majority of new power generation.

As an August article in the Harvard Business Review pointed out because the U.S. solar industry is creating a lot of jobs (bringing on new workers 12 times faster than the overall economy), it could literally absorb all the jobs lost to the entire coal industry if U.S. coal is completely shut down in bankruptcy.

Most people jumping onto the solar bandwagon at this point are doing it for cost savings created by the opportunity of ever increasing electric utility rates. The wealthy can afford to install a large high power solar energy system - enough to meet their energy needs over the entire year. Families without the up-front capital rely on zero money down programs like those offered by Solar City and other solar lease providers. They will not save as much money, but they still come out comfortably ahead, while helping green and modernize the grid.

However, the average American moves over 11 times over their lifetime and more than a third of Americans rent so making a 25 year investment in fixed solar photovoltaic system on a roof is challenging. How can these people take part in the solar energy revolution and all the money savings that come with it?

A technical solution to this is problem is called "plug and play solar photovoltaic" (PV) systems. They are affordable (you buy 1 solar panel at a time for a few hundred dollars) and portable grid-tied solar electric systems. They can be purchased and installed by an average person with no training. This sounds great. Unfortunately, they are largely thought to be illegal in the U.S. because of antiquated regulations. Customers must check to find out with their local utility.

Earlier this year my research group painstakingly went through a technical/safety analysis of plug-and-play PV in the U.S. The study showed there is no valid technical reason we should not follow the trends in other advanced industrialized nations and allow plug and play solar in America. Countries like the United Kingdom, the Netherlands, and Switzerland already encourage plug and play solar. Even the Czech Republic permits it! A blanket federal U.S. electrical regulation may allow plug and play solar in the future (and it could fit nicely into the Trump deregulation goals). However, such a shift in regulations could radically alter the current solar market - for the better.

This new study provides an estimate of this new U.S. market for plug and play PV systems if such regulations are updated by investigating personal financial decision making for Americans. This is an additional market on what is already going on with full home solar systems. The potential savings for the prosumer (producing consumer) are mapped for the U.S. over a range of scenarios. The results show the total potential U.S. market for plug and play solar is over 57 gigawatts (GW). That is actually quite a lot of power as it is equivalent to about 57 large coal or nuclear plants. For comparison there are already less than 100 nuclear plants in the U.S. These plug and play systems would generate approximately 108,417,000 MWh/year, which is 4 times the electricity generated from U.S. solar in 2015. This is remarkable because it would come from systems of only 1 kW or less - tiny 1 to 4 solar panel systems! This distributed solar energy made possible from plug and play solar would provide American consumers approximately $13 billion/year in cost savings! This would be a huge boon for the working and middle class.

However, all the money is not going only to the little people. Big established companies also stand to make a fortune on plug and play solar. Perhaps most interesting to investors is the effect this deregulation of the electric system would have on American retailers such as Wal Mart, Costco, Home Depot, Lowes, Target, etc. Plug and play solar represents an opportunity for sales for retailers from $14.3-$71.7 billion depending on your assumptions about the capital cost of plug and play solar systems. Not exactly pocket change for a new market.