I was not in the mood and just felt too tired. But how do you argue with an overly-excited seven-year-old who proclaims it shall be the highlight of his day? So even though I felt overdressed and the sweater I had on didn't allow for much flexibility, I shut my mouth and let my husband drive us to the bowling alley that evening.

We were assigned a lane pretty quickly although I think we were just lucky to have arrived at the right time, just before the bigger groups started pouring in. It was already busy with almost all the lanes occupied when we got there. But within ten minutes of arriving, I observed the lines getting even longer, as well as the antsy bodies multiplying by the minute, hoping they'd be called for an open spot.

To the right of our lane was a group of friends in their late 20s. To our left was another family with small children. My son, Noah, was clearly enjoying the game and I remember feeling tired in spite of the fun. My son kept going, eager to learn how to throw the ball properly while I just kept wishing the two games would end soon. Beyond ten frames, my arm and shoulder felt significantly weaker and each swing just got sloppier and sloppier to the point where my seven-year-old was scoring better than I was.

Just when I was starting to feel crappy and thought the night was becoming too boring for me, a young lady--in her late 20's perhaps--approached my son. I'm not sure if she was part of the group to our right or if she was just seated on the bar stools behind our lane but where ever she came from, she singled out my son. In her hands was a HUGE pile of arcade tickets. I can't even begin to tell you how many tickets she had but it almost seemed like she had an entire roll. It was so unbelievable that for a moment I thought she worked there and just grabbed the tickets from the back office!

"Do you want these?", she asked my son with her kind, friendly voice.

My son was standing roughly three feet away from me and I could see that he was too stunned to respond. He stretched his arms to receive the tickets as I heard my husband, who was standing next to him, say, "Sure! Thank you!"

As the lady started to walk away, I thanked her too and reminded my son to say thanks as well.

"Oh, you're welcome!", she said with a sweet smile. 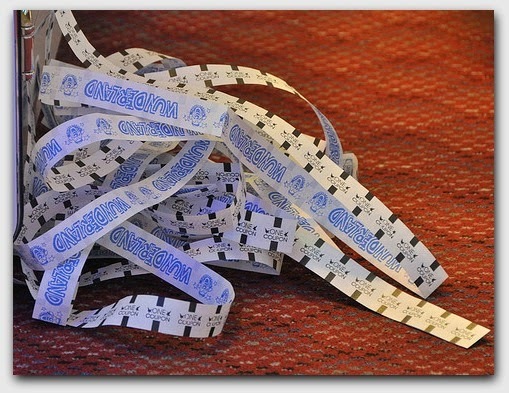 Noah still couldn't believe what had just happened and said, "Mama, at first I thought she was kidding! That's why I couldn't say anything".

I couldn't believe it either. At that point, my husband and I just kept telling Noah how remarkably nice that stranger was, and how lucky he is that he was chosen from among the many children who were around.

After emphasizing to my son how blessed he is to experience such a touching random act of kindness and generosity, I told him to pay it forward. I suggested that he take a certain amount from the roll and share it with the kids next to our lane.

My son was excited to do so and he went with his dad to hand a long strip of tickets over to the other family. They were very happy and grateful as well.

When we went to the machine to check the value of the tickets and see what we can exchange them for, we calculated that they were AT LEAST $50. We had a total of 899 points to exchange after feeding all the tickets into the machine. Instead of just ending up with the usual ('good-as-junk') flimsy, plastic toys that one gets from the glass encasement after every trip to the arcade, Noah was able to take home a small stuffed teddy bear, a toy gun, a small football and some stickers--the most he's ever gotten!

But this experience gets even more amazing at this point. After Noah got his toys, the same stranger who gave us the tickets was lined up to claim something for herself. She had 150 points left to claim and when she saw us, she offered us her remaining points again! We graciously declined and before finally stepping out, I tapped her shoulder one last time and said, "Thank you so much. We REALLY appreciate it!"

I don't think any of us will ever forget what happened. My family's ordinary night was transformed into one filled with a sense of gratitude, thanks to a stranger's unconditional generosity. If I could just have one wish granted right now, it would be for that wonderful stranger to come across this post and know that for at least one night, she was a family's angel! She touched us with her act of kindness, invigorating our spirit as well as forcing our vision to focus on the good that is still very much out there in our world.

I may never be able to personally tell that stranger of the real gifts she gave us that night, but I hope anyone who reads this realizes that no random act of kindness is ever too small. Acts of kindness and generosity inevitably create sacred spaces where wonderful gifts manifest and multiply. Our bowling angel didn't only give us tickets. She awakened and transformed us. She made us feel that in spite of our anonymous interactions, at our very core we are all still very much connected and have the ability to truly touch each other. She shared her light, and this is light we shall carry, with the hope that we can continue transforming the ordinary into something remarkable through utter generosity toward others.

*A version of this piece was originally published on Catharsis.