Lest you ever think the fear of clowns is a made up thing, it isn't. It's not even a fear in my case, but an overwhelming feeling of unease or the urge to run far away. Or as was the case at Christopher Marcini's 8th birthday party, the urge to punch a clown in the balls as hard as I could.

I'm just going to say it. Clowns are creepy. They hide beneath a smiling mask that says I WON'T EAT YOU. But I know better. All those layers of veneer are just hiding the evil that lurks beneath the big lacquered smile. (I'm afraid of the sales ladies at cosmetics counters for the same reason. But that's another blog.) Clowns have a whole face they hide from the world, the details of which haunt my darkest dreams.

Suffice to say, I don't like them. Never have. And being a person who grew up with movies like Poltergeist and It, I'm not going to start any time soon.

Knowing this about myself, a trip to the circus with my kids had the potential to be catastrophic. There are clowns everywhere in those places. But, I love my girls and I've already put myself through agony to squeeze them out into the world. Why would I stop now?

My best friend had tickets and brought us along. Despite the lump in my throat I entered the grounds walking tall, hoping none of them would see me. But as all clowns teach us, there is no hope. I didn't make it 20 feet before they descended. I heard a squeaky voice say, "We've got one,"

Got one? Got one what? Evidently with my beads of sweat and slight hyperventilation the "one" of which the demons spoke was me.

Two fiends stood in front of me and refused to move until I talked to them.

"Why don't you like clowns?" The heavy set one who looked like he wanted to make a skin suit of me said. They were standing so close I could smell them. Clown smell is distinct. It is a mixture of grease paint and impending death. "Just tell us why you don't like us and we'll move."

Thoughts of John Wayne Gacy and Twisty, Pennywise ran through my head in a sadistic loop. But like any good conflict avoidant scaredy cat I did the only thing I could. I lied.

The two villains insisted I prove it somehow. I wish I was making this up. They suggested I snap a selfie with the painted up eaters of souls on either side of me. 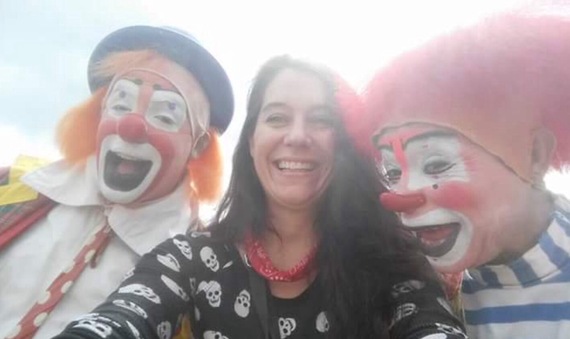 That smell clung with me for hours.

I walked away alive, wiser and braver than I was before. And I sat in that hot tent watching those minions of hell spray each other with seltzer bottles. Every once in a while they'd stop the action and wave to me where I sat, a thin sheet of sweat covering my face while the little boy next to me cried uncontrollably because the clown looked his way.

Trust me, Coulrophobia is a thing. And it is real.