By the end of Part One of our 100-day countdown to opening night of Guys and Dolls at Bronx Prep, 30 percent of our cast members -- including the talented 12th grader who plays Sky Masterson -- are on the verge of being kicked out of the show due to grades, I'm on my way to an expulsion hearing for the 10th grader who plays Nathan Detroit, and as if there weren't enough going on, I'm also launching into the second trimester of my second pregnancy.

Here's Part Two of our tumultuous -- but ultimately, I hope, inspiring -- journey. Stay tuned for next week's final chapter of our countdown to Guys and Dolls, in performance at Bronx Prep May 24-26.

The expulsion hearing for the young man who plays Nathan is emotionally devastating. All 10 people in the room are openly weeping pretty much the whole time, including the principal and the head of school, the teachers who have come to testify on the student's behalf, the student's mother, and the student himself.

In a heart-rending apology delivered with shaking hands and quavering voice, the young man admits that he'd gone against his instincts and committed an illegal action on a school trip in an effort to impress one of his alpha-dog friends who had challenged him to do something he knew was wrong.

His other teachers and I speak, each one us acknowledging this student's otherwise stellar record of community service and school spirit. We wrestle with the excruciating clash between the value of zero-tolerance tough-love and the importance of judging young people's actions with flexibility and nuance.

When the verdict is announced and the young man is asked to clean out his locker, his mother collapses with grief.

I'm late to rehearsal because I can't stop crying. 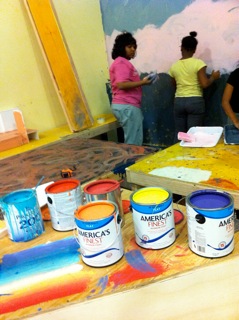 The expulsion, one of several stemming from the same incident, has sent shockwaves through the school, and we've spent a good part of the last two days packed into the gym in deep conversation as a whole school community.

It feels good to be back here in the now-empty space on a Saturday morning, painting with the set crew. When we leave, there is a sunset stretching across the back wall of the gym's small stage. 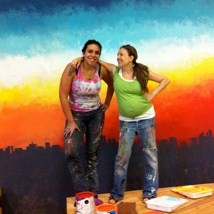 Today on my regular D train commute from Brooklyn to the Bronx a teenage boy stands up and offers his seat. I may have officially hit the three month mark on the calendar a few weeks ago, but taking the kid's seat today is the first time this pregnancy feels fully real. I sit on the train with my hands on my belly, thinking about the mothers of the kids I teach. Soon there will be one more person in the world I care about so much it makes my chest ache.

Nathan's understudy, a magnetic, cheerful, naturally talented 12th grader who has never been in a musical before, misses his first week of rehearsals with his fellow leads. All week I've been livid, threatening to kick him out. Then I find out today that he has been attending the wakes of two friends of his who were shot and killed when a scuffle at a party turned violent last weekend. Having been shot himself in the shoulder earlier in the year -- the victim of an unprovoked and unexplained drive-by -- he's not only mourning the loss of his friends but also reliving his own traumatic experience.

I pass him on the street on my way out of rehearsal late this afternoon and ask him if he's doing okay. He pauses and musters a bone-tired smile. "Not really," he says. Then he hugs me and says, "I'll be there on Monday." 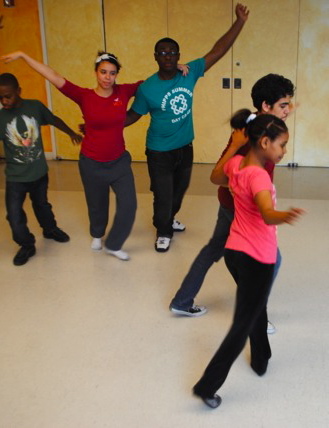 Today's Saturday rehearsal offers a momentary glimpse of brightness. While the costume crew sorts colorful clothing, a select group of dancers learns authentic Afro-Cuban dance forms from dancer/choreographer Rebecca Bliss. Not only am I proud to infuse the usually-corny Havana scene with movements that come from some of our students' own cultural traditions, I'm also excited to collaborate with Rebecca, a former fellow high school theater cast member, and now a dear friend.

Last night at midnight, third quarter grades were posted. Most of our cast members have gotten their GPAs up high enough to participate. But despite several weeks of intensive tutoring, support, cajoling, and follow-up, our Sky has missed the mark.

This is a kid I've known since he was in fifth grade. He's extremely bright and has always excelled. I don't know why he's given up on himself halfway through his senior year. My instinct is that something complex is going on below the surface, but with all the buzz in the air about accountability -- not just in connection with our recent expulsions, but also in the national conversations about test scores, teacher firings and school closings -- I feel intense pressure to enforce the grading policy I helped create. I reluctantly gear up to tell this young actor we'll have to replace him.

Then he walks into rehearsal. His shoulders are slumped and his usually bright eyes are vacant and dim under the brim of the baseball cap he knows he's not allowed to wear in school.

I agonize for a second. Then my teacher hardwiring kicks in. This kid needs accountability, no doubt, but right now my instinct screams that his need for support comes first. I pull the hat off his head, mentally postpone my final decision for one more day and tell him to open his script.

His first run-through is bland and lifeless. I ask him to do it again. Little by little, the role starts to do its work on him. By the third pass, he's standing up straighter. His eyes come to life. The lines crackle; the jokes land.

Two hours later, he has completely transformed. His diction is crisp and assured. He holds himself with confidence and poise. There is a swagger in his walk.

Still, we both know there's an elephant in the room. I send him home and tell him that we'll need to have a big talk before the end of the week. He nods soberly.

I've been up most of the night, partly because the baby was kicking me, but mostly because I've been stressing about costumes, re-choreographing the end of the opening scene to replace kids who've missed too many rehearsals, and struggling over what to do about Sky.

No rehearsal today. My husband and daughter come with me to my 20 week sonogram. We find out that we're expecting a boy.

This afternoon, after a mad flurry of emails to his teachers -- some of whom are supportive of giving him a second chance, others of whom warn me that I'm being manipulated by a clever young con artist who is more like the slick-talking character he plays than I'm giving him credit for -- I give Sky an ultimatum. If he's willing to dig deep and write a letter that explains the causes of his sudden apathy, takes responsibility for his past actions, and lays out a detailed accountability plan for the rest of the school year, I will let him stay with the cast -- provided he follows through on the plan he creates.

I give him a deadline of midnight tonight for the letter.

At 11:47 p.m., his email arrives. The letter attached is well-written, courageous, and heart-felt.

I decide to take the gamble. 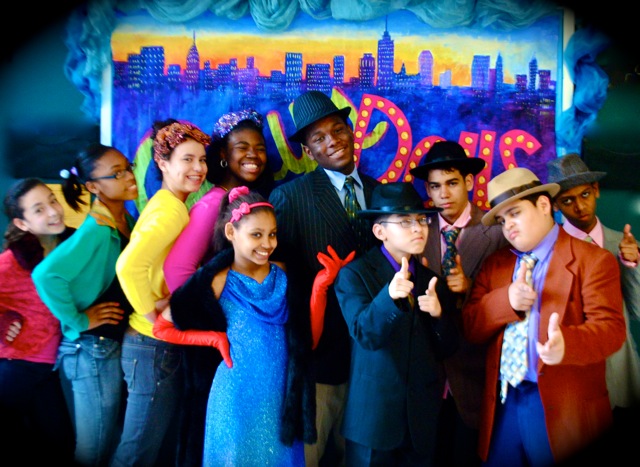 Stay tuned for the final installment of this three-part series of posts leading up to opening night of Guys and Dolls at Bronx Prep.

As always, the students featured in this post agreed to let me share their stories; the views expressed here are my own and not those of my school's administration.