The colorist who gave Robert Pattinson his signature bronze “Twilights” dishes on how recession-savvy ladies can get the look – and save some cash – using his hair highlighting technique.

Raise your hand if you stopped getting your hair highlighted once the economy tanked.

I know I did. In fact, you could track the length of the recession by measuring how much my color has grown out on my head.

What are color-happy recessionistas to do, then? Forgo Starbucks and save thousands, four dollars at a time, so you can keep your color each year? Doubtful.

The color chief and co-owner of the Gavert Atelier salon in Beverly Hills, Stuart Gavert, has a solution to make color grow out in an economic fashion: Twilights.

Twilights are like normal highlights; they’re just strategically placed to optimize grow-out time. Instead of hitting the salon again a month or so after the first color, you go once a quarter and no one is the wiser.

But, why the oh-so-clever moniker? It turns out the technique is the same one used on Robert Pattinson’s head in the Twilight movie. Gavert should know —  he’s the man who gave the year’s most famous vampire his signature color for the first movie. 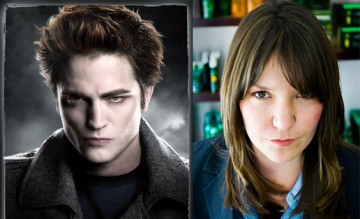 The Birth of Twilights

"They didn't want [Robert] to look dead-dead. Just a little bit dead," said Gavert on the day I visited his salon for my own Twilights session.

The lead hair stylist on the first movie, Mary Ann Valdes, told Gavert the vampire make-up was washing Pattinson out, in a bad way. Not in a sexy-vampire, Edward Cullen way.

"Mary Ann called me and asked me what I thought," said Gavert. "I said, ‘Put some warmth in his hair. Don't make him a redhead or anything. But the warmth will reflect on his skin.’"

Warmth meant bronze highlights. But that created a new problem. Highlights grow out too fast and affect the continuity on a movie shoot. In other words, the filmmakers may shoot the entrance to a scene one week and shoot the rest of the scene a month later. Hair starts looking grown out at that point and people start realizing they're watching a movie and not hanging out with Edward Cullen.

(If you haven’t read the books and at this point are wondering why on Earth anyone would care so much about the color of a vampire’s hair, just trust us. Pattinson's, er Edward Cullen's bronze locks play a central role. Some even wondered if Pattinson's coif was responsible for the movie's success. It's a girl thing.)

Gavert couldn’t be on the shoot highlighting the stars' hair every day, so he developed a grow-out friendly technique and used it on Pattinson, Kristen Stewart and the rest of the stars. The color gets put in under the part in the hair, masking the demarcation line for weeks.

How Do I Get Twilights?

The easiest way to get Twilights is the same way I did: schedule an appointment with Stuart or one of the stylists at his salon. Sessions with Stuart are pricey, $250 a session – he did touch Robert Pattinson’s hair after all. But you can get a junior colorist to do it for less. They've even got training sessions for stylists; that’ll get you rock-bottom hair color for about $40.

If you can't get to Los Angeles, the recession-friendly color can be explained to your own stylist.  Gavert explained the key points for us:

• No putting highlights on the exterior of the hair.  Keep one-quarter inch away from the part, so you won’t see the highlight right on the part.

For the record, Pattinson got two colors. Gavert put four or five gold highlights up front, to bring out the would-be vamp’s amber contacts. I got one color. I already had some gold leftover from my old hair days, so Gavert picked a single mid-tone that worked well with my natural head and gold leftovers.

So, what do you think? Will my Twilights land me a role as Leah Clearwater in Breaking Dawn? Maybe, maybe not. But I know with the next Twilight movie, New Moon, coming out in November, I'll be rocking my Twilights at the film — Gavert said they'd last that long!