On April 6-7, there was a major symposium on CVE, Countering Violent Extremism, that brought, experts, government officials, national leadership and practitioners together to deliberate on the state of America's efforts to respond to the challenge of rising extremism. The symposium was hosted by Creative Associates, a global player in implementing the essential and softer side of CVE and in global development, in partnership with the International Peace and Security Institute. Some of the key speakers at the convention included Secretary of the Department of Homeland Security, Jeh Johnson, Senator Cory Booker and the Ambassador of Saudi Arabia, Abdullah Al-Saud. The convention was scheduled a year after the White House' Global summit on CVE and was geared towards assessing progress and recalibrating strategy.

What is CVE | Countering Violent Extremism

Countering Violent Extremism is essentially President Obama's initiative seeking to reset the so-called 'war on terror' and to continue the fight against terrorism and extremism but hopefully sans the negativity that went with the Bush-Cheney response to the attacks on America on September 11, 2001. The Bush administration's response was full of hubris, uninformed, ideological, and mostly unilateral. It disregarded ethics and civil rights, used torture, illegal detentions, and was perceived by many as an unfair attack on all Muslims. Critics and extremists labeled it as "war on Islam" and it created more extremists than it eliminated.

There are three philosophical differences, in my view, between the CVE approach and the War on Terror approach. First, the CVE approach is without hubris and recognizes that the United States' cannot do it alone. The US needs the entire world to help it fight the global scourge of violent extremism and more importantly it needs the help and support of Muslims, both at home and abroad, to be successful. Secondly, it admits that the "root causes" that feed into extremism must be addressed. The previous approach denied even the idea of root causes and tried to blame Islam as the reason for violence. And finally the CVE approach recognizes that non-violent strategies to counter extremism, such as using development, job creation, improving governance, fighting corruption, advancing counter narratives, are all as important if not more critical than just use of force and law enforcement methods. I discuss other differences in the video above. Please review it for more analysis.

As I listened to the speakers, I realized that those who worked in aid and development, both in the public and private sector, had a very sound grasp of the realities of the Muslim World and understood how important it was to address the root causes that trigger and nurture extremist ideologies and facilitate their proliferation. Some of the programs initiated by USAID in critical countries like Afghanistan and Nigeria are bearing fruit and if executed on a larger scale, can potentially stem the spread of extremism. War, may kill some extremists but it will radicalize many more. America's experience with Iraq has already taught us that; a war that was supposed to liberate us from a dictator has created the conditions for ISIS to emerge. And it cost trillions of dollars. But aid projects cost less, cause no deaths, radicalize no one and help stem the spread of radicalism. 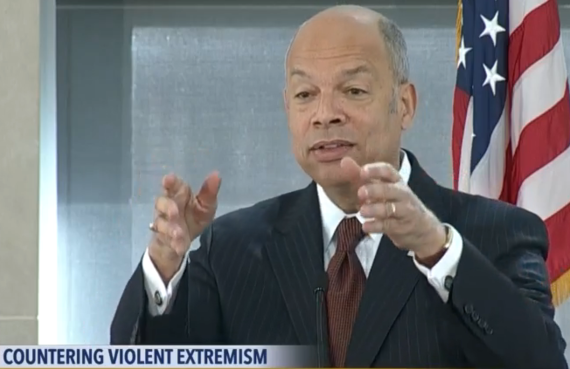 Click to see a video of Secretary Jeh Johnson's speech.

Secretary Jeh Johnson made some very thoughtful observations. He argued that CVE was a critical component of national security; it was not targeting at any religion, it enjoys bipartisan support, and relies on community partnership. About American Muslims, he claimed correctly that the community is very diverse, and that many of its members are very patriotic Americans. But his most important point, and this was also echoed by Senator Booker, was that attempts to isolate and vilify American Muslims would be counter to our national interests and national security.

I was part of the panel on the role of religious voices in challenging extremism. I argued that religion was not the cause of extremism but could serve either as an enabler or disabler. We have to harness the potential for compassion, tolerance and peaceful coexistence within Islam and actually teach it to Muslims - not just use for propaganda while talking about Islam to media - in our mosques, Islamic schools and gatherings. I identified the factors that pulled Western Muslim towards extremism and those that pushed them towards it. Both must be addressed. We need a complex, multipronged strategy to combat violent extremism and using religious narratives is just one tool in the toolbox.

The symposium clearly was addressing one of the key issues that impact our national security and global peace. I found it fascinating and stimulating.