President Obama nailed it this week in his speech on countering violent extremism. At the close of Wednesday's sessions at the White House, the president made the case for where we should concentrate our efforts, and in a call to action, he offered an honest accounting for the division of labor between government and civil society.

Government is the only actor that can physically destroy groups like ISIS and al-Qaeda, provide development assistance in countries that are home to the largest numbers of foreign fighters, and call for progress on national grievances -- from human rights abuses to corruption -- in our bilateral dialogues. Civil society has a crucial role in debunking this ideology of extremism and the narrative that America and the West are at war with Islam.

For an American audience grappling with brutal actions of ISIS and al-Qaeda, the call to action for civil society was the most interesting part of the speech for two reasons. First, the president placed an emphasis on the special role that Muslim-American leaders (and Muslim leaders worldwide) have to play with defeating this strand of extremism. While few would deny that Muslim-Americans have faced discrimination since 9/11, nowhere else in the world do Muslims enjoy more rights and opportunities than in the United States. Yet that isn't the prevailing storyline about America and Islam throughout the Muslim World. 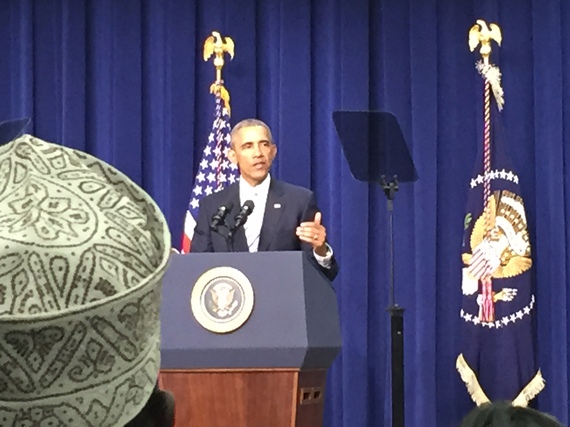 For example, news of the tragic murder of three Muslim-Americans in North Carolina last week has reached hundreds of millions of Muslims and fits into the extremists' narrative of a war against Islam. Unfortunately, stories about the victims' volunteer work in Durham's homeless shelters go either unreported or unread. Volunteering at a shelter is not the stuff of headlines, but it is that kind of civic action that builds community bonds which transcend differences of race or religion. To combat this form of extremism, we need more of those bonds, but we also need for young Muslims around the world to know that those bonds are a norm of our society.

The President also spoke to the unique role that Muslim religious leaders have to play in decrying ISIS' perversion of their religion. More religious leaders come forward every day, but those voices need to be amplified and new voices need to be heard. Current efforts are not enough as extremists have become adept at spreading their message of hate, particularly on the Web. ISIS, for instance, has developed apps that enable their followers to put out 90,000 tweets in a single day. The true spokespeople for Islam are not competing at that level. They need to reach young people in Brussels, Tunis or even Arlington who are watching and listening to what ISIS is putting out there. The messenger and the message are equally important in this case, i.e. a White House video is not going to be effective.

Second, the president's call to action is significant because it extends beyond Muslim communities and speaks to all of us. Just like gangs, cyber-bullying, drunk driving and other societal issues that have challenged the health of American communities, countering extremism is something that each of us is going to have to start thinking about in our neighborhoods and schools.

While a relatively small number of Americans (compared to Europeans) have traveled overseas to join ISIS, there is no room for complacency. There are no exact recipes for why someone joins an extremist movement, but you could make a good case that preventing radicalization in the U.S. involves forming community-level partnerships that promote inclusion and dignity for all. At the summit, law enforcement officials, civic and religious leaders, and educators from Boston, Los Angeles and Minnesota presented pilot programs from their communities. The techniques they spoke about included developing after-school programs for at-risk youth, building models for community policing, running dialogue groups and creating community-to-school liaison positions. These techniques aren't new, but these communities are applying them with new partners in a respectful and constructive way.

Along these lines, President Obama made the case that Muslim-Americans must feel like they "have a place here in America," and that our democracy and civil liberties must be upheld and respected. Only 27 percent of Americans have a favorable view of Muslims, though. If we were talking about Jews or African-Americans, that sentiment would prompt a national dialogue. To combat extremism, this will have to change.

At our best, America's diversity is our strength, our source for innovation, and the common condition that has led to our societal notion of equality. All of our groups must feel included and equal, though or our system doesn't work.

You could watch the news and conclude that countering this threat from ISIS and al Qaeda is a "Muslim problem." That isn't the case however -- this is a threat that impacts the wellness of all of our communities and tests the strength of our founding principles. Combating extremism is part of the new normal. While we can't do the heavy lifting that our government has to carry out on our behalf, there is indeed something that each of us can do.