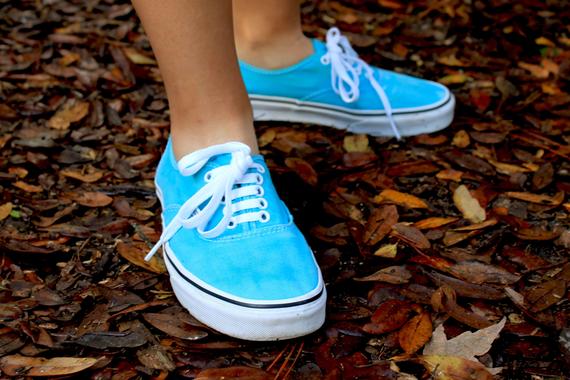 You might have received a Fitbit or similar item as a holiday gift this year. And you might be thinking that you'll use your fitness tracker to monitor your exercise -- which is logical, since that's what fitness trackers were made for.

But I've learned to use my Fitbit a bit differently.

On your Fitbit app you can add your friends who also have Fitbits to monitor their steps. Mostly I've just used the "taunt" feature, which is like a Facebook "poke" but with a better name.

I only have one friend who regularly uses a Fitbit, Ariane. After I added Ariane to my Fitbit friends, I peeked at her average. Ariane averaged 12,000 steps per day.

I felt demoralized. I didn't even know how to get the baseline 10,000 steps that Fitbit suggests you start at. All I do is parent toddlers and clean my house and sit at my desk all day working -- just like Ariane. What was she doing that I wasn't?

The next day, she texted me: Pace pace pace. I ignored the text. I couldn't imagine anything more ridiculous than pacing around the house to collect steps on my Fitbit.

One Saturday, she came over to my house with her 2-year-old daughter. We turned her daughter and my two young sons loose in my large, fenced-in yard. The three of them tore around like skinny-limbed hobbits-goblins. Ariane and I call this "co-parenting."

Late in the afternoon, Ariane and I tapped our Fitbit bracelets to check the status of our lighted dots. Fitbit gives you one dot for every 2,000 steps. Ariane had five dots already, done for the day. I only had two.

I was pissed. Ariane and I lived parallel lives, yet here she was with her smug little dot collection.

I started pacing in swift, angry circles around my driveway. The kids rode around on scooters and big wheels and bikes with half-pumped tires because we broke our bike pump.

A little over a year ago, my family moved to this suburban house from a small urban area where I used to walk everywhere. Before we moved, I used to push my kid's stroller to preschool and then walk to a cafe or library to work. I walked a lot, but I walked with a purpose.

Now here I was, living in a home in a neighborhood with cul-de-sacs and no sidewalks, which studies show is likely bad for my health. Ariane was right to be worried: I'd become a car-and-homebound hausfrau. The ironic thing was, I work full time. But the not-walking was deadening not just my body, but my brain as well. And it was this brain-deadening that was worrying me.

Before I moved to the suburbs, I never realized how much I relied on my morning walk into town to settle my mind after the bustle of preschool drop-off. I'd place my toddler in the caretakers' capable hands, then stroll downtown past repurposed warehouses and buses to one of many coffee shops I called my c'office.

Then I quickly had my second kid, and we moved to the land of cul-de-sacs. By moving here I'd traded friends -- quirky neighbors and cafe regulars -- for more heated square feet and a big yard. I'd also traded my daily walks around town. Sure our former house had been small, and our commutes had been long. Right then, pacing in circles with Ariane while the kids flung themselves out of trees and off of scooters, that trade felt like a devil's bargain.

While I paced, grim-faced, Ariane trotted along next to me. She said, "Why are you so angry?"

"Because I have to pace in circles around my driveway." Realizing Ariane was right was hard for me to deal with.

Ariane's kid called for her help. She wanted to ride my 5-year-old's bike that doesn't have training wheels. I kept pacing by myself and wondered how others would see me if I were out here alone, pacing and pacing and pacing.

Increased "psychomotor agitation" -- most notably, pacing -- is a symptom of a manic episode, for example, and of a lot of other apparently unhealthy things. I know about psychiatric disability. I know a little something about what it looks like for a woman to pace in what appears to be meaningless circles around her suburban driveway.

To someone who doesn't know what I'm doing, I might as well be pacing around a room in the attic ripping yellow wallpaper off the walls. To an external observer, would there be any difference?

I paced with Ariane until I hit 9,000 steps -- a high for me then -- and called off the campaign. Annoyed and tired, I opened the lid of a giant Costco bucket of animal crackers, put it down on the driveway, and called the three kids over. I figured I'd go whole hog on the crazy mom thing.

The kids danced around the bucket like it were a maypole, cramming the crackers into their mouths.

After that Saturday, I kept up the pacing for a week. Long enough that I noticed that the pacing started working.

And it really started working. Not only was I getting 10-to-12,000 steps per day, which was so satisfying --

(If you've never worn a Fitbit bracelet then you cannot know what I'm about to tell you. There is nothing more satisfying, in Pavlovian sense, than that bracelet vibrating on your wrist to let you know you've hit your 10,000 steps. After experiencing that vibration, you can no longer imagine a better place to have something vibrate.)

-- but it was also incredibly freeing. Although I was still home-bound, I was no longer desk-bound. I'd created a world inside a world, and inside the world I'd created, I paced.

I immediately started feeling better in my head. Sitting at my desk feeling my shoulders tense up, feeling a migraine coming on, losing focus, or feeling agitated -- pick your symptom from your criteria list of choice -- I'd just get up and pace in circles around my house and I'd feel better.

Sometimes while I'm working now, I look at my wrist and realize I don't have enough dots for that time of day. So I get up and pace. When the phone rings, I pace while I talk. I'll get 2,000 steps in the course of an ordinary work call. And no one but me knows what I'm doing.

Except Ariane. She always knows.

We're talking about a book we're writing. "What are you doing?" she asks.

Then we plan the next chapter, our creativity benefiting, so the research goes, by the act of walking itself.

Then it was a Thursday. The day I go see my psychiatrist. At this point I'd been pacing for nineteen days.

Usually when I arrive at my psychiatrist's clinic, I have to wait a few minutes. I tend to get to her office early, and she tends to run behind. But now that I pace I don't mind waiting. Pacing has given me a new patience -- it's an activity to do, yes. But it is also, as some doctors say, a form of "muscular meditation."

That Thursday I paced the long clinic hallway, flipping pages on my e-reader with one finger, meditating with my feet. When it came time for my appointment, my psychiatrist's nurse came out to get me. She saw me pacing by and said, with surprise, "Oh! Are you going somewhere?"

She rounded her mouth into an O and backed into the office suite, then waved me into the doctor's office. I was laughing when I landed in the overstuffed chair.

I told her that I'd punked her nurse a little bit. "I told her I was pacing." I pointed at my Fitbit, explaining my pacing epiphany. I said, "But when I told your nurse I was pacing, it was funny. You know, because pacing is also symptomatic."

My doctor -- who actually has a great sense of humor -- did not smile. "Yes. I know." Then she told me she thought I was having a manic episode.

I got annoyed at that. "Well if I don't pace, then I go a crazy. I've been going crazy in my new house for a year. But you're saying that if I do pace, then I am a little crazy." I leaned forward in the overstuffed chair. "So which is it?"

And then I said something about "The Yellow Wallpaper."

My psychiatrist said she'd never heard of "The Yellow Wallpaper." So I sent her the Project Gutenberg link to the story.

If you're reading this, and you're a specialist in women's mental health, you need to read "The Yellow Wallpaper." You need to know if you lock a woman in a room, or in a house on a cul-de-sac, and tell her to stop thinking or to stop moving, things get dark really fast.

A woman needs to have a way forward, even if the way forward is only a well-worn path on her floor and a blinking bracelet.

I talked to Ariane about pacing again the other night after I texted her a screencap of my Fitbit stats. I'd hit 12,000 steps around 7 p.m., a new record for me. We talked (while pacing, of course) about the David Sedaris Fitbit story, about his 60,000 steps a day and his fear that his feet might snap off at the ankles.

I said, "What keeps us on this side of that kind of obsession?"