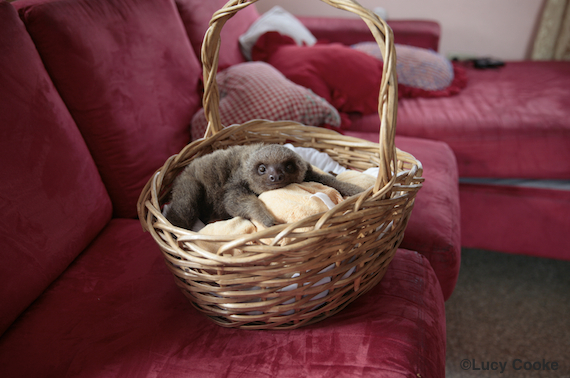 Watch where you sit! A baby sloth turns couch potato in Panama. Photo by Lucy Cooke

Nestor Correa and his wife Yiscel Yanguez have had their home invaded by baby sloths. The result of this somnolent intrusion is somewhat ironic: T hey aren't getting any sleep.

The couple live in Panama city where together they run APPC wildlife rescue. Sloths are their number one rescue animal thanks to Panama's rapid development, which is replacing their jungle home with apartment blocks, roads and power lines. 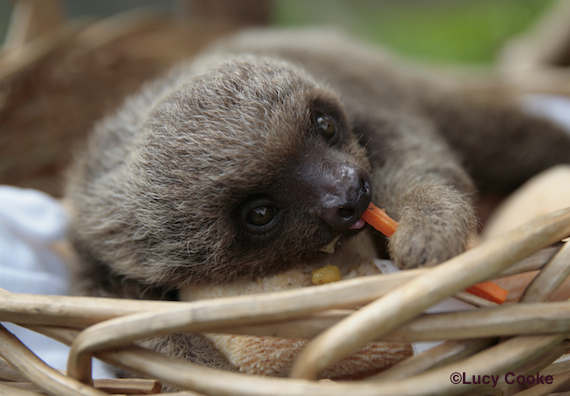 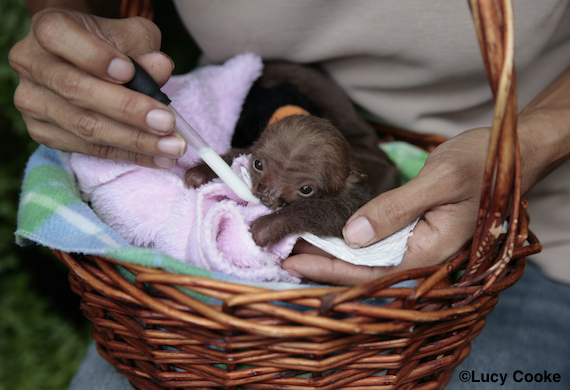 This may sound like every sloth lover's dream but baby sloths are very hard work. They need to be fed goat's milk every three to four hours -- a painfully slow process that cannot be rushed in case the sloths inhale the milk into their lungs instead of their stomach. It requires zen-like patience and an untrained hand could easily kill these delicate babies. 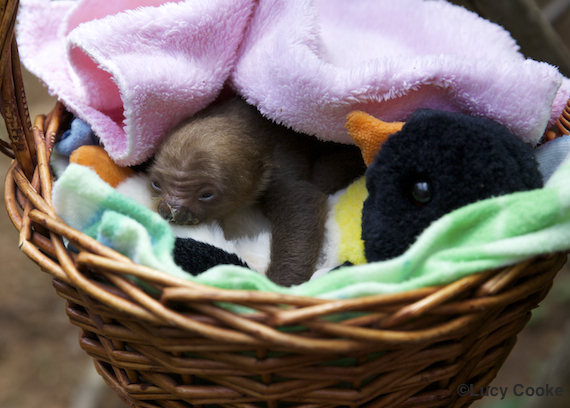 The youngest member of the family, Lisa is just a few days old. Photo by Lucy Cooke

The baby sloths get a stuffed toy to snuggle and a basket to sleep in. But no cages. Nestor and Yiscel believe that sloths, like many large mammals, get critically depressed when they are put in a cage, and this can lead to sickness and death. Instead their sloths have the (slow) run of the house. 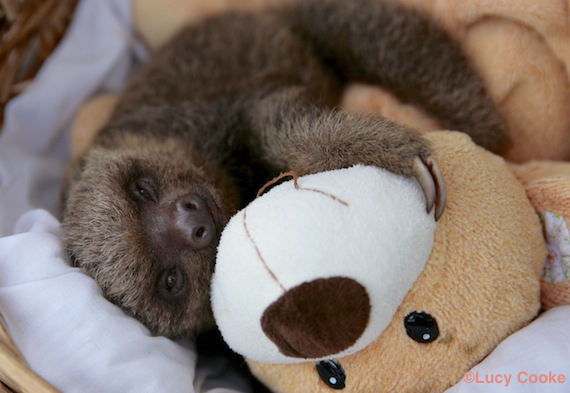 At night Nestor says he is kept awake by the largely nocturnal sloths climbing all over the curtains and furniture. But he would not have it any other way. He knows that means the sloths are happy, healthy and behaving as they should, which will make reintroducing them back into the wild much easier. 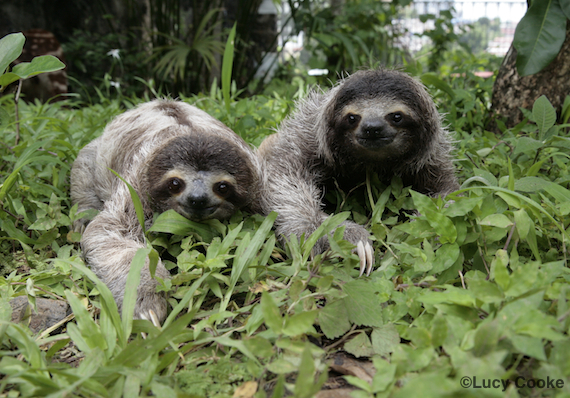 During the day the sloths hang out in the couple's garden. I was entertained by the two three-fingered Bradypus sloths, Punky and Coconut, repeatedly making a slow dash for the trees beyond the garden wall, which contained leaves they particularly fancied. I was told this meant that these resident escape artists were almost ready to live their lives as wild sloths. 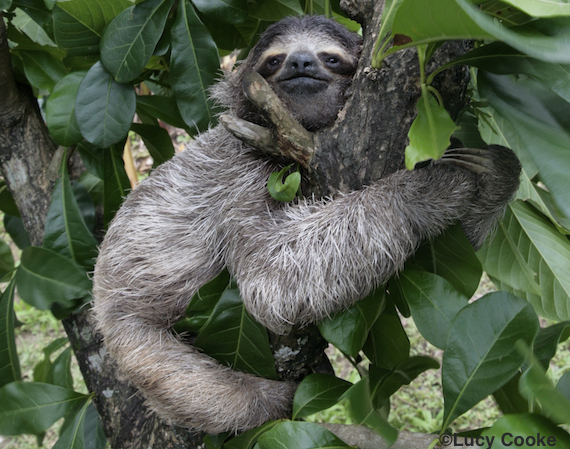 So Nestor and Yiscel had started the slow process of introducing them to a patch of wild jungle outside the city where they could be carefully observed in order to guarantee a successful release back to nature. 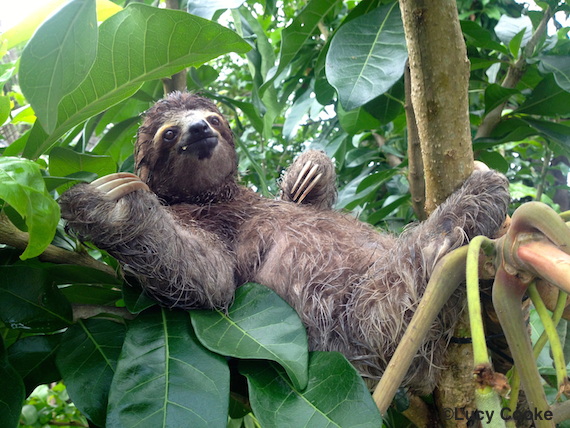 Coconut chilling... like a sloth. Photo by Lucy Cooke

As founder of the Sloth Appreciation Society, I was visiting Panama to take photos of my favorite animals for my "Hangin' With Sloths" wall calendar. But my heart was unexpectedly stolen by another resident of the couple's home: a baby tapir named Valencia whose mother had been killed by poachers. 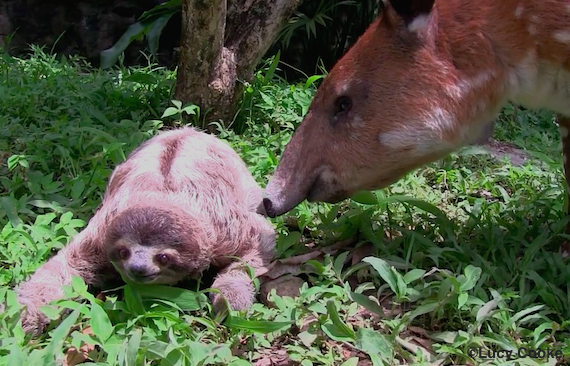 Tapirs are highly endangered due to hunting and habitat loss so Valencia is an extremely special orphan and getting five-star treatment as a result. Not only had Nestor's son had to give up his bedroom for the tapir to sleep in, but he'd also donated his paddling pool for Valencia to poop in (they only go to the bathroom in water). Quite a sacrifice for anyone, let alone a young boy, yet one he was surprisingly happy to make. 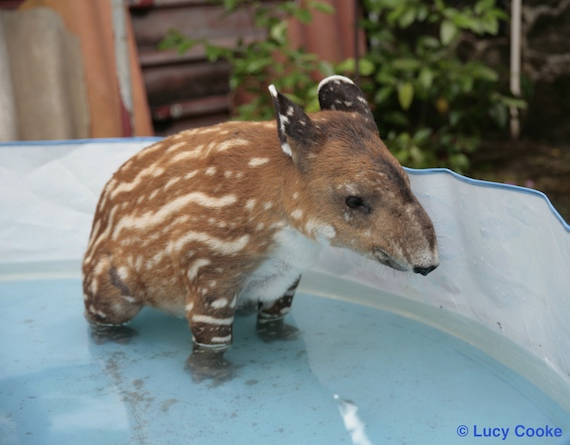 Valencia making use of the pool as only he knows how. Photo by Lucy Cooke


It is easy to love animals, but it is quite another thing to sacrifice the comfort of your own home to saving them. Conservation money is hard to come by in places like Panama and success demands improvisation. But I left full of admiration for the extraordinary levels of dedication from Nestor, Yiscel and their family to protecting their country's unique wildlife. 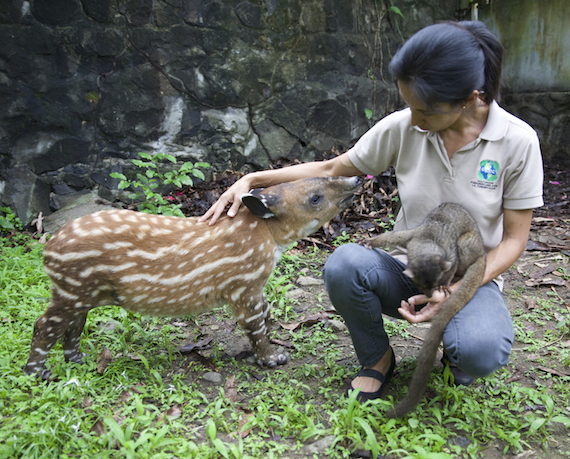 Yiscel and her unconventional adopted family. Photo by Lucy Cooke

Lucy is the founder of the SLOTH APPRECIATION SOCIETY, producer of award-winning Animal Planet series MEET THE SLOTHS and author of the New York Times best-seller A LITTLE BOOK OF SLOTH. Her 2015 'HANGIN' WITH SLOTHS' wall calendar is out now.