These are just a few words describing how couples get cozy under the covers … in romance novels and rom-coms. In real life, sharing a bed with a partner can be more complicated.

We partnered with Sleep Number to test our theory that despite the tangle of numb (or spastic) appendages and the unconscious snores, grunts and sighs that come with sharing a bed with a loved one, there’s no one else we'd rather wake up to.

Sarah and Pat -- Together 4 1/2 years, engaged to be married 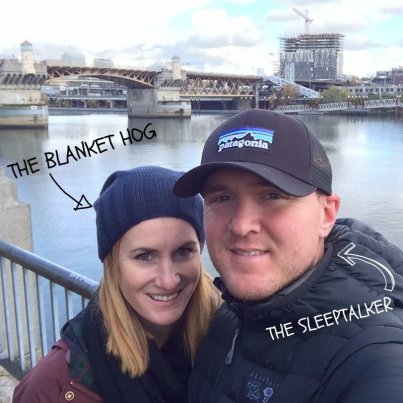 Sarah says: “I like to sleep close and roll myself in the blankets like a burrito so I am as snuggled in as possible.”
Pat says: “She is a blanket nightmare! I always wake up uncovered and cold.”
Sarah says: “While I may be a blanket hog, he talks in his sleep and has the habit of sitting up in bed and yelling at people who aren't in the room. I’m not sure which is worse!”

Joel and Jess -- Together 6 years, married for 3 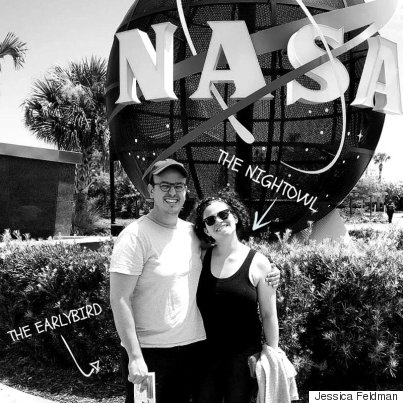 Jess says: “Sleeping is probably both the most fun and contentious part of mine and Joel's relationship. This is because I am an insomniac night owl, and he is a chirpy early bird who often falls asleep on the couch before 9 p.m. … Since 99 percent of the time I go to sleep hours after Joel's already fallen asleep, I often inadvertently wake him up when I am getting into bed.”
Joel says: “No matter how much we love and loathe our separate sleeping habits, every morning before I leave for work I wake Jess up and make her give me a hug.”

Keishon and Meghan: Together 5 1/2 years, living together 3 years 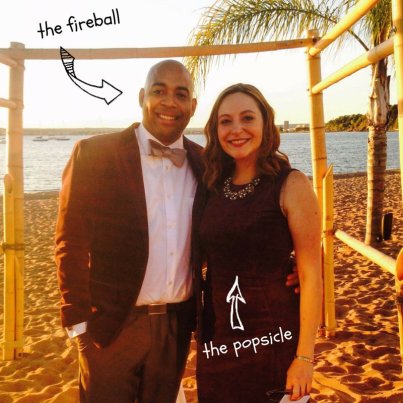 Meghan says: “I like to wear many layers while I sleep and wrap myself -- and the dog -- in our duvet.”
Keishon says: “It’s terrible! I'm very particular when it comes to how I sleep -- I hate blankets and prefer using pillows instead. Meghan always needs huge blankets, forcing me to sleep under the covers. I know it's sounds crazy, but I prefer it to be cold when I sleep … . This is a problem for her because she's always, always cold.”
Meghan says: “Our room gets very hot at night, and because Keishon is bigger than me he blocks the airflow to my side of the bed. I usually find myself waking up in a sweat, ripping Keishon’s pillows away from me and taking off layers -- while pushing the dog away. He insists on spooning.”

The Couple: Hal and Drea -- Together 5 years, married for 3 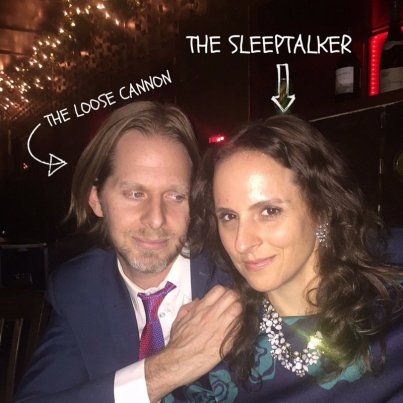 Drea says: “My husband is the sweetest, nicest man I have ever met, but he can be a total JERK in his sleep. He doesn't mean to -- in fact he is 100 percent asleep when it happens! -- but he has been known to come on to me in his sleep. When I say, ‘No thank you sweetheart,’ he calls me a mean word and rolls over.”
Hal says: “Drea talks in her sleep. She also screams and wakes up totally freaked out when she is overly stressed. She also doesn't have any idea where the middle of the bed is: She thinks that the middle is her side and is very opinionated about it in the middle of the night when I try to claim some space.”
Drea says: “... He always tells me he loves me right before he falls asleep. I just have to be careful of the nighttime [Hal].”

Jennifer and Kevin -- Together 10 years, married for 6 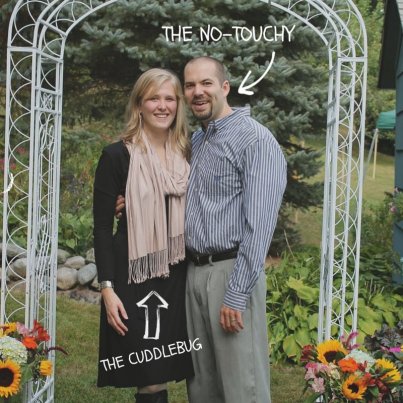 Jen says: “I'd love to fall asleep in Kevin's arms, but I'm not allowed to touch him. At all. Sometimes I sneak my toes over to his feet and fall asleep touching his feet!”
Kevin says: “Jen takes all the blankets and snuggles them up to her nose. Also, she sleeps with way too many pillows. I don't know how she doesn't wake up with a sore neck!”

The Couple: Terry and Larry -- Together 37 years, married for 35 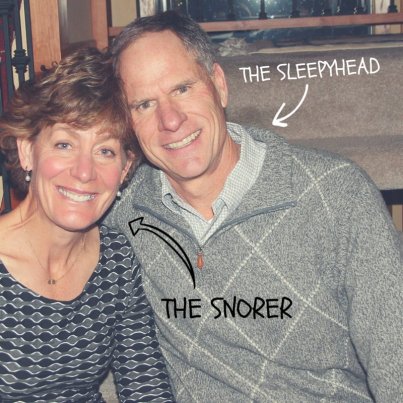 Terry says: “Larry can fall asleep anywhere. He can take a power nap for 10 minutes and wake up refreshed.”
Larry says: “Terry is the perfect sleep partner. She doesn't steal the covers in the winter and keeps me warm, and in the summer she stays on her side of the bed so I stay comfortable on warm nights.”
Terry says: “He falls asleep within minutes of hitting the pillow and gets a solid eight hours a night. I find all those things extremely annoying because I can’t do any of them and I'm always tired.”
Larry says: “[Terry] does move around a lot when she's trying to fall asleep .... like, a lot. And then when she's finally asleep, she snores. But she insists she doesn't. But she does. Other than that, she's perfect.” 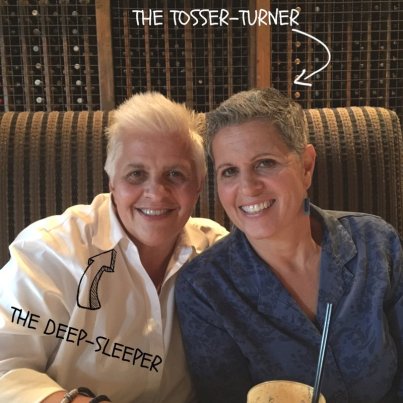 Mary says: “The funny thing is we are both going through menopause, which greatly complicates sleep. I am further along than she [is], so as time passes my sleep is getting better, longer and deeper while hers is still easily interrupted.”
Fran says: “I wear a mask and earplugs to keep out all extraneous light and sound. … Once awake I cannot go back to sleep, so staying asleep is imperative. Mary likes to keep the room cold, and I am convinced it is so I will have to snuggle her.”
Mary says: “We’ll hold hands or I will spoon her or she will spoon me, if I can get her to turn in the night. Mostly, [Fran] sleeps flat on her back, covers perfectly nice and neat, with little-to-no movement -- which forces me to be creative. She is a masked woman, like Zorro, with super-duper plugs in the ears -- totally sensory deprived. I am a free spirit, nothing on anywhere and I like to be fully ‘aware’ of my surroundings, even in slumber. I am up early and out the door as chipper as ever, whether I have slept well or not.”
Fran: “I call her the, ‘Ever Ready Bunny’ because she wakes up ready to take on the day no matter how little rest she has gotten. I, on the other hand, like to get up gradually.”

Maddie and Steve -- Married for 28 years 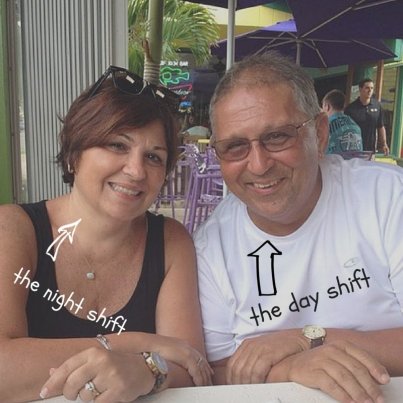 Maddie says: “For at least 25 of [our married years] we have worked opposite shifts of each other. When we do share a bed, Steve mumbles and grumbles a lot when sleeping. This makes it very difficult to sleep on the nights I am not working and trying to adjust to a regular sleeping pattern.”
Steve says: “Maddie is in a constant hot flash, and snuggling is out of the question. Bed covers aren't usually anything more than a sheet. The problem there is I like lots of covers, so I find myself ‘hogging’ the blankets, the comforter -- anything that will keep me warm because regardless of the temperature the window is open to combat, ‘the flash.’”
Maddie says: “I have to admit: I get my best sleep when I get home in the morning from working an overnight shift and have the bed to myself.”
Steve says: “Sometimes, when I'm tossing and turning, there's nowhere to go -- except [to] the sofa in the living room. … Despite it all, there is nobody that I would rather get up next to in the morning.”

So, What Did We Learn?
That sleeping together is hard. Nevertheless, these couples aren’t jumping mattresses; in fact, according to The National Sleep Foundation, 61 percent of American adults still opt to share a bed with their partner. In other words, despite our absurd quirks, bed-hogging tactics and noisey compulsions, dreams really are made sweeter with our loved one by our side. At least, according to these couples.

Sleep Number® is committed to helping couples get their best possible sleep. Sleep Number® beds adjust on each side to your ideal level of firmness, comfort and support -- your Sleep Number® setting. Add the DualTemp™ layer to heat or cool each side of the bed, and you can both sleep exactly the way you like.