You witnessed his yen for ticking things off his list on your second date and learned about his fear of cumin when you moved in together. But there are a few insights you only gain by getting a flat tire together in Montana. Or Mongolia.

1. How He Looks In An "I <3 NY" Shirt And Beard
Maybe you've never seen this man in any non-earth-tone hue, but the second you get to the tropical hotel he's in a Hawaiian shirt. Maybe he is a secret souvenir guy, the one who buys a "Yellowstone" ball cap that first day and proceeds to wear it every day of vacation until the last, when he promptly retires it to a stack of place-marking caps you never noticed before in the back of his closet. And then there's the facial-hair situation. There are those men who go all Conan O'Brien at the prospect of a week or two off, and suddenly you know what he looks like with a beard. After all, vacation isn't just a chance to visit a new place, it's an opportunity to experiment with being a new person.

2. His In-Flight Elbow Span
Forget all that business about how he treats his mother. You can really tell what kind of husband someone will be by sitting beside him on a 20-hour flight in economy seats to Cambodia, which is where you find out if he offers you his arm as a pillow, or hogs the arm rest and leaves you two centimeters of stretching-out space.

3. His Number
And by "his number," I of course mean how many times he can skip a stone on the surface of a pond. There is some secret skill lurking in that familiar creature. It might be stone-skipping or sea-glass-spotting, but you never knew it, since you live in a landlocked city. It might be knowing the Latin names for trees and wildflowers you've never seen before. Emboldened by unfamiliarity, your polite partner might turn out to have a gift for haggling umbrella prices during a downpour.

4. The Twang
Most of us put some serious work into becoming the people we are. So by the time you first encountered your partner it's possible that he'd consciously shuffled off the local vernacular of Nowhere, Noplace, thoroughly Gatsbied away the accent of his hometown. Which is why you will never hear him "Uff da! That's good, hot dish and pop!" until you've had a little lunch with him and his grandmother in Bemidji, Minn.

5. His Late-Night-Emergency-in-a-Foreign-Land Alter Ego
What an adventure you two are having together! Out until 2 a.m., exploring this fascinating new city! Such life-affirming discoveries: elderly people folk dancing in a moonlit square, the charming local drinking game, the fact that your quaint B&B locks its doors at midnight. Wait, what?

Now your significant other transforms into his late-night-in-a-foreign-land alter ego. Is he Sneaky-Break-In Guy, capable of jimmying a "quaint" lock with a credit card? Is he Panic-And-Blame Man, immediately turning on you with, "I told you we should check!" and descending into a sulk faster than you can say, "You did not!" Is he Mr. Adversity-into-Adventure, taking this mishap as an excuse to go skinny-dipping and sleep on the beach? And how do you like being his sidekick/henchman/superhero-squad-boss?

6. His Post-Boredom Brain
There is no boredom like driving-for-10-hours-through-the-night boredom, when in the occasional illumination of street lamps you will see, perhaps for the first time, your partner's resting state, be it pensive silence, philosophical inquiry or inventing complicated rhyming songs that make you laugh harder than you've ever laughed before.

7. His Weekend Portuguese
You're in Lisbon for a long weekend, an exotic adventure tacked on to a work trip. You will likely never be back. Here, then, is the language-barrier litmus test. Maybe he pantomimes everything, managing to make himself understood and revealing a heretofore hidden gift for physical comedy. Or maybe he charms everyone you encounter with his clumsy attempts at the Portugese he picked up from the guidebook and the podcasts he listened to on the way over. It seems like a small thing, but when you think about it, this reveals how he communicates -- whether he is about gesture, or facial expression or words, and whether he learns as much local slang as he can, for no real reason other than he's interested in language, that he is a person who fully inhabits every day, a person who is not afraid of looking silly, a person who wants to live large and completely, not because he should, but because he knows no other way.

8. How Much You Like Him At Hour 56
In those first courting days you wanted to be together all the time, forever. And you were. Except for when you went home. Or to work. Or the gym. Or out with your friends. But when you're traveling together there is no work, no gym, no network of friends, no household errand to run. There is just you and your beloved, alone together in the world, 24/7. This can fray even the most tightly woven relationship. So you say, "Okay, I read a thing on the Internet and now I understand that I am technically an introvert, which merely means I get my energy from time spent alone, so please don't take it personally when I say I am going to take the afternoon to myself to linger alone in this art museum and I will see you at dinner." And he says, "Okay. Have a great time. Let's meet at that place near the hotel you wanted to try." And you explode with love for him, and forget immediately how annoying he was in the fish market, and by dinnertime you miss him more than you ever could have imagined, and are brimming with ideas for all the many adventures you hope to go on together.

OWN Live Happier OWN Relationships Own U.S. Travel 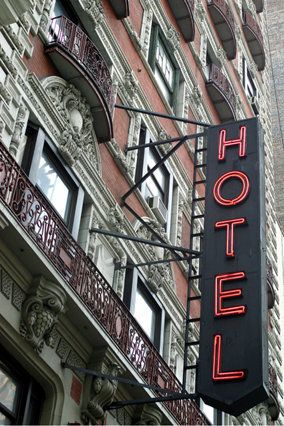 1 / 12
Stay At Hotels In Business Districts For Lower Weekend Rates
In many cities, business travel drives hotel prices on certain days of the week. In New York City's Financial District, hotel occupancy and rates are high from Monday through Thursday nights. But once the business travelers leave, hotels in the Financial District have increased availability, making a Friday through Sunday getaway much more affordable. This same trend applies to cities coast-to-coast, according to the experts at <a href="http://www.travelzoo.com/" target="_blank">Travelzoo</a>.
Thinkstock