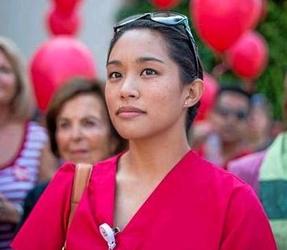 At 6:28 pm on September 21, Allysha Almada looked at her cell phone and saw an email that appeared to come from the White House. "The President cordially invites you to attend the White House Summit on Worker Voice to be held at the White House on Wednesday, October 7, 2015 at nine o'clock in the morning."

"At first I thought it must be a joke," Almada recalled, "but I made a few calls and realized that this was the real thing."

The 28-year-old Almada was invited to the White House because of her leadership role in the union drive at Huntington Memorial Hospital in Pasadena, California, where she began working in the intensive care unit (ICU) in 2011, right after she graduated from nursing school. At the White House, she'll join other leaders in the various movements to improve the lives of working people across the country.

Earlier this year Huntington's nurses began to organize for union representation with the California Nurses Association/National Nurses United (CNA/NNU), so that they could strengthen their collective voice as patient advocates. Almada and her fellow nurses had been speaking out about eroding patient care conditions, including chronic short staffing and inadequate supplies.

However, as is seen all too often when workers seek a collective voice to protect their communities or improve their own rights and conditions, Huntington's management responded with a vicious, anti-union campaign, a reminder of how labor law today remains heavily slanted against workers. In August, Huntington fired Almada, despite the fact that she received excellent performance evaluations and her long-term ties to the hospital. The union has demand that Almada be reinstated.

In fact, Almada considered Huntington Hospital her second home. Her mother has worked there as a nurse for over 30 years. She was born at the hospital, attended its day care center, and volunteered there when she was in high school. She worked as a nurse's aide in Huntington's ICU before becoming an RN. Her family dog volunteers at the hospital as a therapy dog.

"I was close with my mom's coworkers. I loved Huntington," Almada recalled. "I knew I wanted to go into nursing."

As she prepares to leave Monday for Washington, D.C., Almada is going to bring a stethoscope that she hopes to give to President Barack Obama on behalf of her fellow nurses and the California Nurses Association. Engraved on the stethoscope is the message: "Listen to Nurses."

"I'm excited and I'm nervous," Almada said. "But more than anything, I feel determined to share the stories of Huntington nurses and what we've been through, and get our political leaders to support legislation to support workers' rights and more protections against retaliation, like what happened to me."

In addition to attending the summit at the White House, Almada will be speaking at two press conferences on Tuesday -- a press briefing with AFL-CIO President Richard Trumka and a press conference on Capitol Hill with Sen. Bernie Sanders of Vermont announcing introduction of the Workplace Democracy Act, legislation that would help restore workers' rights to bargain for better wages, benefits and working conditions. She will also meet with California Congresspersons Judy Chu and Adam Schiff and top aides to Senators Feinstein and Boxer.

"Nurses at Huntington have been fighting for years to have a voice at our hospital, but now we have a listening ear with the President of the United States," said Almada. "I look forward to meeting with workers around the country who are facing similar challenges in exercising their right to collective bargaining."

Given her strong ties to the hospital, Almada was thrilled when she was hired at Huntington four years ago after graduating from the nursing program at California State University in Los Angeles. She worked hard, made close friends among her fellow nurses, and enjoyed caring for her patients.

"I was outspoken about patient safety," Almada said. "In nursing school, I learned that a lot of hospitals use lift teams to help patients turn over or get out of bed, so nurses don't have to strain or hurt their backs. I gave my manager some research about this, but nothing happened. When we were short on linens or IV pumps, I mentioned to my manager. But the problem continued. I thought the hospital was jeopardizing patient care, so I said something."

"To cut expenses, the hospital began rationing supplies, like bed linens and patient gowns," explained Almada. "Many of our patients in the ICU have very compromised immune systems so the risk of infection is very high. Also their conditions and the meds they are on often lead to diarrhea. It is absolutely essential that we have adequate supplies of clean linens, yet the hospital is intent on limiting these basic necessities.

Nurses say that patient care standards at Huntington have eroded, compromised by cuts in nursing as well as support staff. Nurses have been forced to do more work with less help. They were made to do more admissions, transportation of patients, and housekeeping tasks because of hospital cutbacks in these areas.

Thanks to CNA's efforts, California is the only state in the country to enact a law mandating the ratio of nurses to patients in acute care facilities, which Huntington and other hospitals opposed before it was passed by the California legislature and signed by Gov. Gray Davis in 1999. The law took effect in 2004, giving hospitals five years to phase in the changes. Nurses report that Huntington has violated the nurse-to-patient ratio law, endangering patient safety.

When some of her colleagues contacted the California Nurses Association to help them organize a union at Huntington, Almada was initially skeptical.

"At first I wasn't sure it was a good idea," she recalled. "I went to some informational meetings. But I soon realized that we needed a collective voice to be advocates for ourselves and our patients. I'm not afraid to stand up for what I believe is right."

Almada became a visible leader in the union drive. Before and after work, she met with fellow nurses -- in their homes, coffee shops, and outside the hospital -- to encourage them to support the unionization effort. She was one of three Huntington nurses whose photo appeared on a CNA-sponsored ad on public buses running throughout the Pasadena area. "Save one life you're a hero," the ad said. "Save a hundred you're a nurse."

On July 26, she spoke out at a public community forum at a local church and at a press conference on the need to improve conditions at the hospital, joined by many local elected officials and community leaders who supported the nurses' right to organize. A few days later, she was quoted in a local newspaper about conditions at Huntington Hospital and the management's expensive union-busting campaign.

A few weeks later, she was fired.

"I put my whole soul into caring for my patients, and management knows this. At Huntington, I've worked as a nurse educator and sat on a committee of nurse leaders who bring patient care concerns to management. I have special training in trauma and open heart," Almada said. "I care deeply about providing the best possible care, and that's exactly why I spoke up at the community forum -- to help ensure that RNs are supported in providing top-quality, safe care."

Soon after the nurses' union drive began in May, the 123-year old 625-bed hospital (named for Henry E. Huntington (a turn-of-the-century railroad tycoon) has engaged in a nasty and expensive union-busting effort, paying a bevy of experienced and high-priced anti-union firms and consultants - including Littler Mendelson, IRI, and Genevieve Clavreul of Solutions Outside the Box -- to harass nurses and undercut their organizing efforts.

Managers at the hospital - which employs 1,220 nurses -- interrogated nurses about their union activity, required nurses to attend anti-union propaganda meetings, and denied pro-union nurses access to the hospital when they were off-duty and wanted to discuss union matters. When pro-union nurses and communities allies were meeting in the cafeteria, hospital security staff told them to remove their literature from the tables, but didn't say anything to a group of anti-union staff at the other side of the cafeteria who had their own materials. One of the hospital's security staff took photos of a pro-union nurse as she passed out leaflets on the public sidewalk outside the hospital. The hospital arbitrarily switched the retirement date of one nurse who had worked at Huntington for 31 years - and who was an outspoken union supporter -- so she wouldn't be able to vote in the union election last April.

Last summer, several local clergy met with Huntington CEO Steve Ralph (who earned $1.16 million in 2012, the latest figure available) and other high-level hospital executives to urge them to allow the nurses to conduct their organizing efforts free of intimidation and harassment.

"The nurses who are involved in the organizing effort love the hospital. I've met nurses who have worked there for over 30 years," said Rabbi Joshua Levine- Grater. "Their concerns aren't just about the salaries. They say they don't have enough staff or enough equipment. And it has gotten worse. The union leaders feel targeted and singled out."

Despite being issued a formal NLRB complaint -- citing numerous instances of illegal conduct -- management continued its pattern of union-busting up through the RNs' attempted election in April of 2015. CNA/NNU has called on federal officials to set aside the election, citing more than 40 election violations that made a "free and fair election" impossible.

Despite her concern about the hospital's intimidation tactics, Almada has been impressed by the broad support that community, faith, and political leaders have given the nurses' organizing drive. In addition to consistent backing from local clergy, Congresswoman Judy Chu and Pasadena Mayor Terry Tornek have appeared at pro-union events.

On Monday, community leaders and her fellow nurses will hold a press conference at Pasadena City Hall to send Almada off to Washington. City Councilmember Victor Gordo will present her with a "Courage Award" in recognition of her bravery in continuing to speak out for safe patient care and the right to organize a union at Huntington Hospital.

"Allysha is an inspiration to all of us who care deeply about Pasadena and we're proud that she's representing our community at the White House Summit on Worker Voice," said Gordo.

After she returns from Washington, she has another event to prepare for. She's getting married on October 24.

The best wedding present she could get would be to get her job back.

"I can easily get a job at another hospital," said Almada, "but I'd like to continue working to improve things at Huntington. I miss my fellow nurses and my patients."

Peter Dreier is professor of politics and chair of the Urban & Environmental Policy Department at Occidental College. His most recent book is The 100 Greatest Americans of the 20th Century: A Social Justice Hall of Fame (Nation Books, 2012).