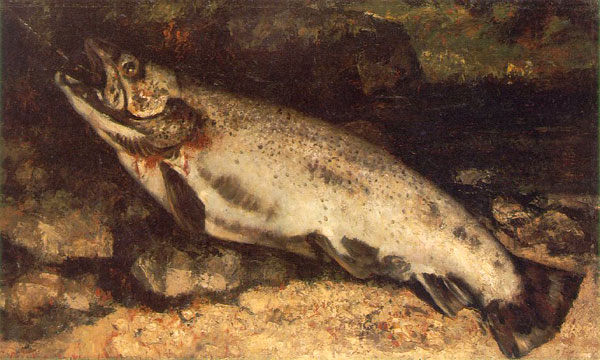 "Fish, I love you and respect you very much. But I will kill you dead before this day ends."

- Ernest Hemingway "The Old Man and the Sea

I recently came across three of Courbet's trout paintings on the Facebook page of Brooklyn painter Kyle Staver. Staver, who notes that "Courbet's Trout are as tragic as the last act of King Lear," has a keen eye for what French artists meant to say with their fish.

She also has a great feeling for contrast, and she offered one up in the same post. "Matisse's Goldfish" Staver notes, "conjure languid dreaminess and introspection." Her insightful comments triggered my imagination and the contrasts began to take shape.

Matisse's "Goldfish and Palette," now on display at MoMA in the exhibition "Matisse: Radical Invention 1913-17,"  is the work of an artist who methodically screened out the world. Courbet, a heroic, brash man relished confrontation and engagement. The two artists were so different -- in their aesthetics and in their masculinity --  that looking at their work side by side is both a jarring and revealing exercise. 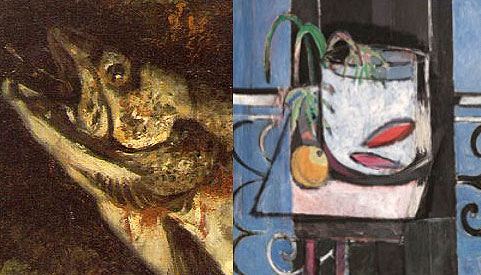 Above: Details from paintings by Courbet and Matisse

In January of 1912 Matisse traveled to Morocco, remaining there and painting, mostly in Tangier, until April. As art historian Jack Flam has written "Matisse appears to have been impressed by the fact that goldfish were objects of contemplation in Morocco." Apparently, goldfish in bowls were common in Moroccan opium dens which he visited. Whether Matisse inhaled or not, the languid visual pleasure of it all mesmerized him, and when he returned to Paris he installed a goldfish bowl in his studio.

Looking at Matisse's many paintings of goldfish, it is obvious that they the fish in the bowl were a great decorative item: flashing bits of living color to be stared at in an interior. Interiors, of course were crucially important to Matisse, a man who craved domestic order and carefully orchestrated aesthetic satisfaction.

In "Goldfish and Pallette" the interior has been abstracted: purged of descriptive details like many other Matisse canvasses of the period. The interior tones of gray and black, colors Courbet would have appreciated, set off the sharp orange of the goldfish. The canvas is an exploration of the world seen through a willful, imaginative intellect.

In some respects the goldfish may serve as an allegory of the artist's experience. Matisse's friend, the painter Jean Puy felt this way, once writing "I can easily imagine a valiant goldfish who takes intense delight in all the rainbow colours and forms visible through the distorting form of his glass bowl..." Matisse's wife, whose job it was to keep the world from intruding into his peace, reportedly called her husband "The Goldfish" from time to time. 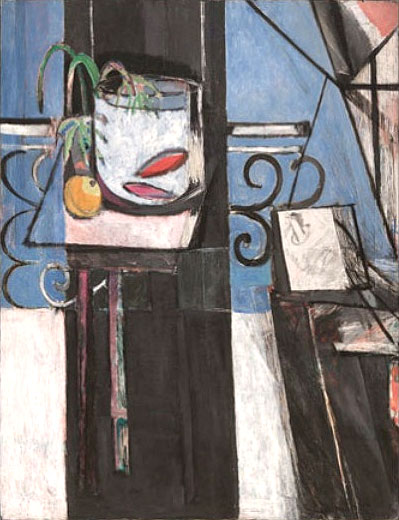 Matisse's dedication to art was his way of keeping his mind off the world's problems: he painted his "Goldfish with Pallette" during the brutal opening years of World War I. In 1943 when his wife and daughter were arrested by the German Gestapo for acts of resistance, he distracted himself by making lithographs to execute Baudelaire's "Les Fleurs du Mal."

Ultimately, Matisse's natural disengagement became a great asset. After a 1941 surgery for abdominal cancer gutted him and confined him to bed he created some of his most joyful works. Working in a suite of seaside hotel rooms -- his goldfish bowl -- physical pain and infirmity left his acute aesthetic sensibility intact, even enhanced.

If Matisse was a goldfish, Courbet was a trout: a wild, rugged river fish, brushing against rocks, swimming against the current.

Courbet, who had grown up in Ornans near the Swiss border always saw himself as a man of the country, strongly aware of nature.  His art depicted on nature unvarnished, channeled truthfully by an objective brush. A "man's man" he was the Ernest Hemingway of painters.

A non-conformist who had turned down the cross of the Legion of Honor when it was offered to him by Napolean III, Courbet was an anarchist/socialist in his politics. In 1871 he spent six months in prison -- where he suffered from severe hemorrhoids -- for having advocated the demolition of the Vendome Column during the short-lived Paris Commune. "As much a hunter as a painter..." according to one early biographer, Courbet found solace in fishing after his release.

Courbet's 1872 canvas of a dying trout, bleeding at the gills, still on the hook,  is painted in an unflinching realist style. Signed on the lower left in red oil paint, it is also inscribed with the Latin phrase "vinculis faciebat: (made in bondage)"

Just what Courbet was referring to is unclear. A weary man who would die five years later of alcohol related disease, perhaps he had come to see life itself as bondage, death as release. Courbet didn't shy away from death: he respected and confronted it. He seems to have had what the mythologist Joseph Campbell would call an atonement relationship with the trout, defeating it while respecting it. His painting both displays the sturdy fish both his trophy, but offers it immortality as well. Put another way, Courbet painted the fish as a form of apology.

Courbet prided himself in resisting the containment of culture in any form. He asked that "When I am dead, let it be said of me: 'He belonged to no school, to no church, to no institution, to no academy, least of all to any regime except the regime of liberty."

Matisse was a cultivated man who was comfortable in urban culture: an aesthete and a Parisian. He liked his nature refined, constrained and abstracted. He didn't share Courbet's need to conquer and subdue nature, but instead identified with it:

"When we speak of nature it is wrong to forget that we are ourselves a part of nature. We ought to view ourselves with the same curiosity and openness with which we study a tree, the sky or a thought, because we too are linked to the entire universe."

Courbet and Matisse were very different men; one a tragic Loue river trout, the other an elegant goldfish. What they shared was a profound sense of life's suffering. One of them swam against the current all his life until he was hooked. The other circled in his bowl content, peering out at the shimmering rainbows projected by the life outside.

Carl Jung says that water represents the unconscious. Following that idea, there is one more striking contrast that Courbet's trout and Matisse's goldfish can suggest. Courbet at the end of his life was a fish out of water. For just a moment, bloody and defeated, he transcended his own mind and courageously viewed life in its full terror and glory. Matisse, a goldfish swimming in the water of his own subconscious, came to know and control his own mind, a brave act of a very different kind.