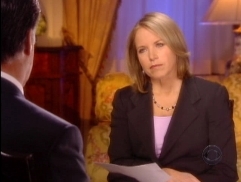 On tonight's "CBS Evening News" Katie Couric asks her brood of presidential answerees, "Do you think the risks of climate change are overblown?" Mike Huckabee — who we mention first because did you hear, he's the FRONTRUNNER! — says that "the honest answer for me, scientifically, is I don't know" (because, you know, science has two sides). Fred Thompson isn't sure, either, but shockingly doesn't know enough to elaborate ("I can't give you a list of specific items I would address"). Mitt Romney juts out his lower lip and pouts that it's not only America's problem ("They don't call it America warming. They call it global warming. And that means China.")

Our favorite part is how Joe Biden mentions ethanol gas stations, and then says he doesn't want to come off as "corny." HA! Unintentional puns are the best. He looks backward to history for inspiration: The nation should give it "The same kind of commitment that Kennedy made about going to the moon." Hillary Clinton also has a retro idea, proposing that the country emulate the concept behind war bonds. (Not as fun as going to the moon.) John McCain has been to Greenland, the South Pole, and the arctic and knows it's for real. That's some straight talk, he says. Well sure, now. Meanwhile, CBS doesn't even pretend that Kucinich, Tancredo, and Hunter are in the race. Ah, democracy!

Update: It behooves us to complete Romney's statement: "Which is the biggest Co2 emitter in the world, as well as other nations like Indonesia and Brazil are gonna have to be a part of the global effort." A commenter emailed and busted us for being glib about that quote, and since Romney actually seemed to know what he was talking about, it only seemed fair to publish the rest of it. We'd rather be glib about Thompson, who really didn't seem to know what he was talking about. He just figured he'd authorize "research and development" and be done with it. But to watch the segment, it is actually heartening — and telling — to note that most of the candidates, including the Republicans, acknowledge that no, fears of global warming are not overblown (and way to frame that question, CBS — especially the day after Al Gore delivered his speech for the Nobel Peace Prize, which he won for warning darkly about the dangers of...climate change).