Mosaic-Tile Panel with Inscriptions from Qur'an
Image courtesy of the al-Sabah Collection, KuwaitThe Seljuqs (1038-1307), swept out of Central Asia to establish a vast empire in West Asia. Seljuq rule witnessed a cultural cross fertilization, exchange and synthesis of traditions from today's Turkmenistan, Iran, Iraq, Syria and Turkey. At the Metropolitan Museum of Art, Court & Cosmos: The Great Age of the Seljuqs, brings together nearly 300 splendid objects illustrating the great flowering of culture in the Seljuq realm. 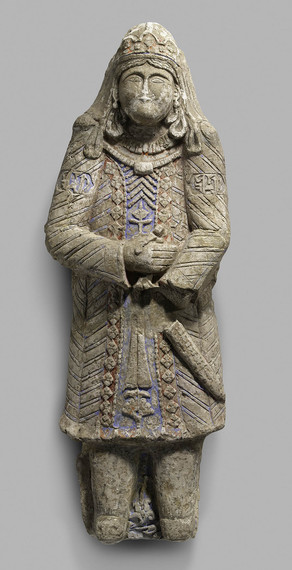 Visiting the exhibition, you are greeted by the figure an elegantly-dressed palace guard. The guard is from a painted stucco frieze that once decorated the walls of the reception area of a palace complex in Iran. This image of the sultan's personal guard, with his jeweled headdress and sword, symbolizes the authority of the ruler and likely flanked or faced the throne. The richly ornamented headdress and heavily embellished clothing attest to the wealth and power of the Seljuq court that flourished during the 12th-early 13th century. 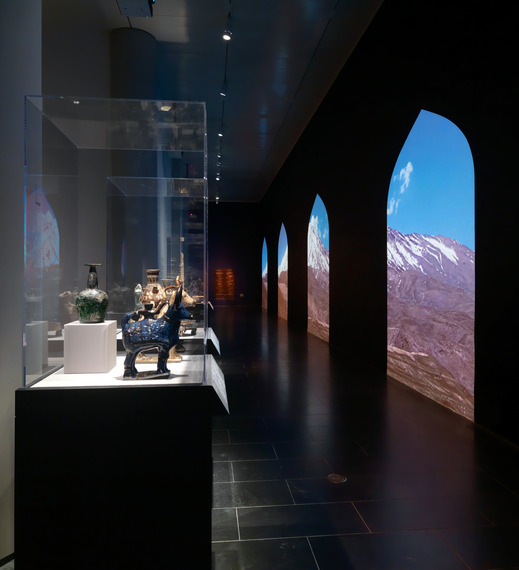 Image: © The Metropolitan Museum of Art

Turning the corner into the main exhibition area is somewhat like entering the Seljuq court itself. You step into a space defined by a wall of video projections in which gracefully arched windows offer views of changing scenery. The majestic landscapes, photographed by Henri Stierlin, are seen past the windows provide a dramatic contrast with the explosion of color and the richness of materials on display. Ceramics, glass, woodwork, textiles and metalwork vividly depict the palace life enjoyed by Seljuq rulers and their courtiers. 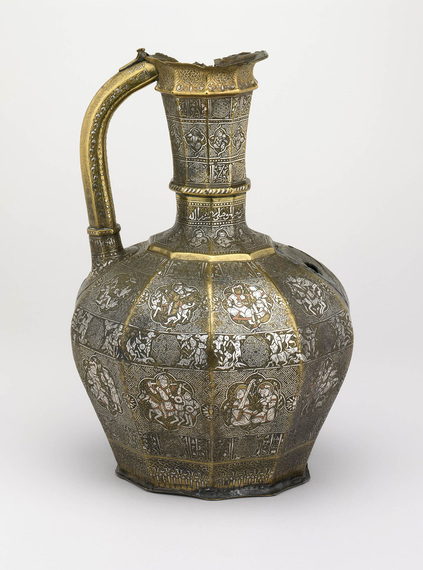 The Blacas Ewer, Shuja 'b. Mana'a al-Mawsili, Mosul, Iraq, 1232
Image courtesy of the Trustees of the British Museum, London

An outstanding example of Seljuq metalwork, Blacas Ewer, an elegant brass vessel, is lavishly decorated with raised and engraved medallions illustrating the ideal and elegant courtly life of the Seljuqs. Serious and lighthearted pursuits of court life are depicted in roundels on the body and neck of the ewer. Scenes of hunting, garden feasting and musicians alternate with vignettes of military exercises and combat.

On the wall behind the Blacas Ewer, circular video projections of the inlaid copper and silver medallions are projected in sequence. The enlarged video projections allow visitors to appreciate the subtle details of gesture, expression and posture that enliven the tableaux. The figure of the calm and just ruler among his subjects emphasizes his power, as well as the protective and talismanic qualities of the ideal Seljuq ruler. 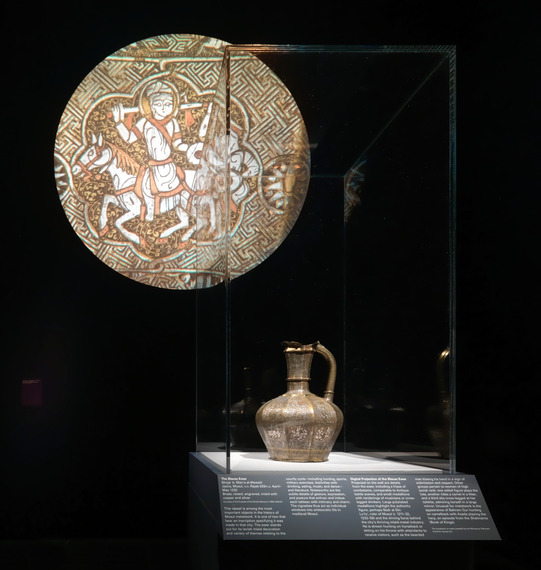 The enlightened Seljuq rulers actively promoting scientific and technological advances within their kingdom. A display of medical and scientific instruments includes exquisite apothecary jars for storing ingredients and surgical implements that are just as elaborately decorated as luxury objects from the Seljuq courts. 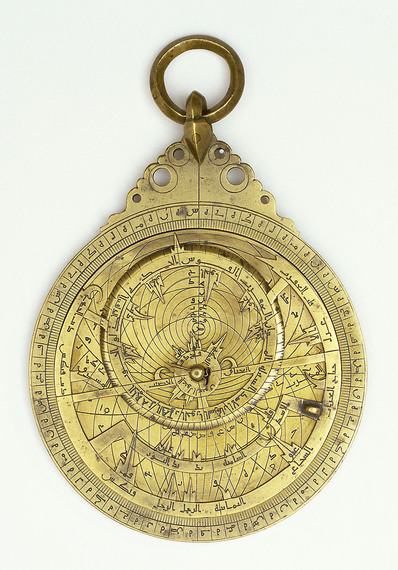 'Umar Khayyam (1048-1131), best known today as a poet, was a leading astronomer and mathematician of the Seljuq world. At the court of Malik Shah, he helped devise an accurate calendar and established the vernal equinox, celebrated today as Nowruz or Persian New Year.

Other Seljuq astronomers designed elaborate astrolabes to determine the distance of specific stars from earth and the time of day. A beautiful and complex brass astrolabe from the early 12th century contains a rete and four interchangeable plates with diagrams keyed to four important cities of the Seljuq world: Mecca, Jerusalem, Medina and Damascus. The compact size of the instrument and the ring for suspension would have been useful on pilgrimages, surveying land and verifying the direction of Mecca, which Muslims face when praying.

The adoption of paper-making technology, introduced from China, is included among the Seljuq advancements in science and technology on display. The use of paper led to an explosion in book production. A manuscript, Degrees of Truths (Daqa-iq al-haqa'iq) from the late 13th century in ink, gold and watercolor on paper, includes five treatises: astronomy, astrology angelology (study of angels), talismans and magic. The text emphasizes prognostications to safeguard against disasters. Depicted is Mercury, protector of the applied arts, dressed in a scribe's robe and holding a book, pen, bowl of snow and pot of fire in his multiple hands. 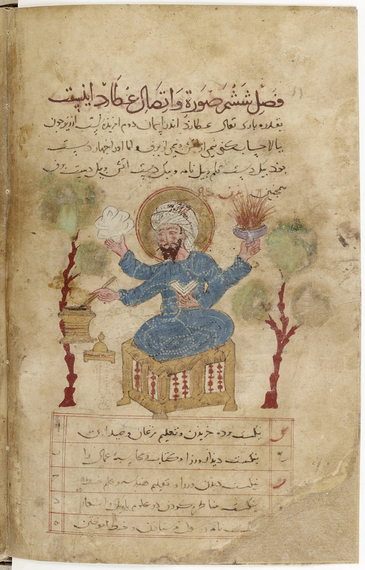 The scientific advances of the age allowed solar and lunar eclipses to be predicted. Three total solar eclipses were observed in Baghdad, Jazirat Ibn 'Umar (Cizre) and Cairo between 1061 and 1241. But in the face of uncontrollable natural disasters including earthquakes, and epidemics, the Seljuqs turned to talismans and magic bowls, as well as the prophecies of astrologers to ward off calamity. Syria experienced 25 destructive earthquakes during the 12th century. Hybrid creatures and symbols of the zodiac appear on Seljuq objects for protection and luck. 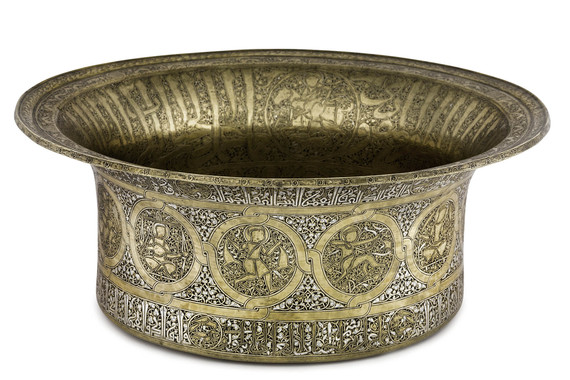 The Seljuq empire, a realm that included Muslims, Christians and Jews, left a splendid and varied legacy in art and architecture. The objects on display in Court & Cosmos: The Great Age of the Seljuqs express the values and belief systems that existed within a realm stretching from modern Turkmenistan to the eastern shores of the Mediterranean.

The legacy of the Seljuqs in art and architecture, political and religious spheres has long outlived the Seljuqs, but it exists today in a perilous state. Objects attesting to a vibrant, forward-thinking and tolerant empire are endangered by current conflict in the region. Across from the video projection of a bay of windows is a photo of the Minaret of Aleppo, Syria, a magnificent work of 11th-century religious architecture and a UNESCO World Heritage site, destroyed in 2013. The final video projection of the exhibition is the brickwork domes from the Masjid-i Jami'in from Isfahan, Iran, projected onto the ceiling.

© The Metropolitan Museum of Art

Court & Cosmos: The Great Age of the Seljuqs will be at the Metropolitan Museum of Art through July 24, 2016. 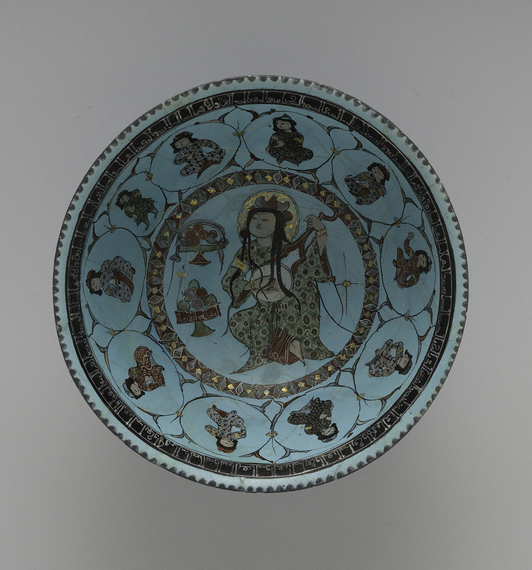