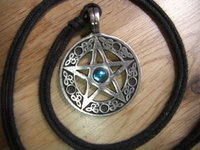 A three-judge panel of the federal appeals court in Chicago has blocked an Illinois prison warden's confiscation of a small pentacle (a five-pointed state within a circle) medallion worn by an inmate as a symbol of his Wiccan faith.

The July 13 preliminary injunction issued by the 7th Circuit reversed a district court denial and lets Gilbert Knowles, a prisoner at Pontiac Correctional Center, keep wearing the medallion while pursuing a lawsuit against the warden under a federal law, the Religious Land Use and Institutionalized Persons Act (RLUIPA). That law forbids government imposing a "substantial burden" on inmates' religious exercise, unless the restriction serves a "compelling governmental interest" and is the least restrictive means to do so.

The medallion in question was small enough (under an inch in diameter) to comply with state prison rules on inmates' wearing of jewelry, but another state policy forbade prisoners from possessing five- or six-pointed stars, on the grounds they could be used a gang symbols. (Knowles had offered to keep the medallion inside his shirt when he was around other inmates, but to no avail.)

The appellate panel's unanimous ruling in Knowles v. Pfister, written by Judge Richard Posner, found the prison had "gratuitously infringed" the inmate's freedom to exercise his religion, noting the pentacle medallion holds a position in the pre-Christian pagan Wiccan religion comparable to the place the cross holds for many Christians. Knowles claimed he believes the medallion protects him against "harm, evil and negative energy."

The appellate decision also quickly dismissed the lower court's summary decision an injunction was not warranted because the state policy banning star-shaped symbols only blocked one part of Knowles' religious practices. The brief appellate decision accompanying its injunction order pointedly noted a U.S. Supreme Court decision last year (Holt v. Hobbes) explicitly made the test for a RLUIPA violation whether a government restriction places a substantial burden on inmates' religious exercise, not whether inmates could still practice their religion in other ways.

The appellate panel also dismissed two other reasons the lower court had cited for refusing to grant the requested injunction: Knowles not having proved he needed an injunction because he lacked an adequate legal remedy, and his seeking relief that would force the corrections system to take affirmative steps, not just preserve the status quo. What, the appellate ruling asked, would constitute an adequate legal remedy for denying Knowles the ability to practice his religion - money damages? And, to get any relief at all, didn't Knowles need an injunction to keep the prison from violating his RLUIPA rights?

The appellate opinion was even more dismissive of the warden's argument that even if Knowles kept the medallion inside his shirt when other inmates were around, they might see it when he showered. It practically growled the case record had not a shred of evidence to show Knowles wears his medallion when showering, or that any inmate's wearing a Wiccan medallion, whether openly or inside his shirt, had ever caused a problem at the prison.