A marketing campaign for CoverGirl's football-inspired collection of game day looks has taken on an entirely new pall in the wake of video footage showing former Baltimore Ravens player Ray Rice punching his then-fiancée in an elevator.

CoverGirl's slogan for the ad series -- "Get your game face on" -- was meant to encourage fans to make up their faces in the colors of their favorite team. But a version of the ad aimed at Ravens fans was unofficially edited and passed around on social media, tackling the issue of domestic violence and how the NFL has addressed it.

In CoverGirl's official ad, the model wears perfectly applied purple eye shadow, its raven feather edges outlined with black and gold. But the modified version that surfaced on Twitter shows the model's makeup marred by a dark bruise spreading out from her swollen, half-shut eye.

As journalist Sil Lai Abrams notes, the ad's re-imagining is doubly significant because "makeup is used to cover bruises from #domesticviolence."

Here's the Photoshopped version of the ad which has been making rounds on Twitter:

Journalist Adele Stan has been credited with creating the first version of the edited ad. The image has evolved since she posted it on Twitter over the weekend and has since gone viral. 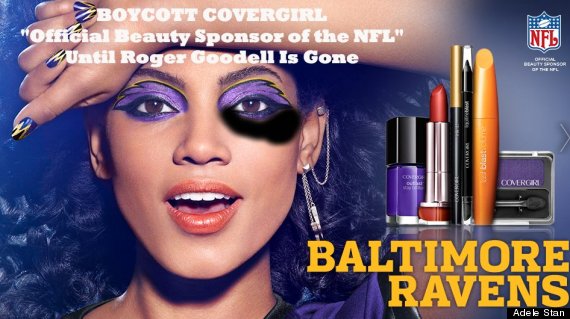 Rice was cut from the Ravens and suspended "indefinitely" from the league only after the Sept. 8 release of footage that showed him punching Janay Palmer. The running back was initially given a two-game suspension for the blow that knocked Palmer to the floor, apparently leaving her unconscious.

Although Goodell says the NFL did not have access to footage showing the blow, a law enforcement official claims to have sent an executive a copy back in April.

A representative for CoverGirl was not immediately available to comment.

UPDATE: Aug. 16 -- CoverGirl responded to our request for comment with this statement:

As a brand that has always supported women and stood for female empowerment, COVERGIRL believes domestic violence is completely unacceptable. We developed our NFL program to celebrate the more than 80 million female football fans. In light of recent events, we have encouraged the NFL to take swift action on their path forward to address the issue of domestic violence.