Okay, I didn't wear a hidden mic. (Did they have those in '67?) I didn't don gloves to mask my fingerprints that hot summer in Philly. But, I was truly an infiltrator, a provocateur-for-progress in the War on Poverty declared 50 years ago this month. 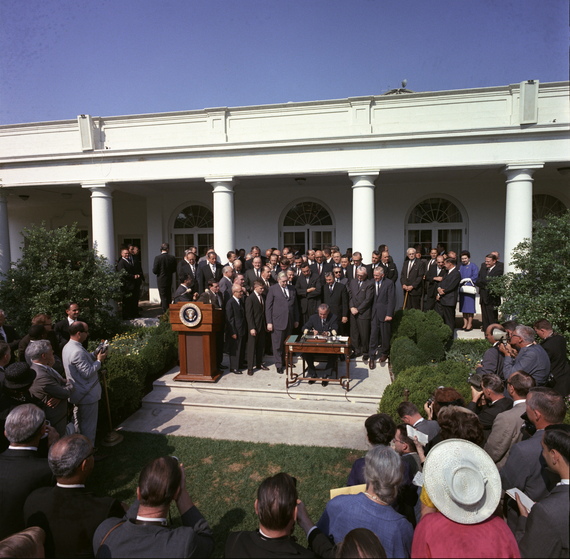 Here's how it happened and what I learned.

After a stint in a Quaker-run organizing school in Chester, PA, where training included speaking against the Vietnam War on (literally) soap boxes in Rittenhouse Square and watching FBI agents snap our photos, it was increasingly clear to me: Ending the war was not enough, something was deeply wrong here at home.

Tom Hayden, Students for a Democratic Society, the Port Huron statement -- they all made perfect sense to me. We knew what we had to do, and I was ready: Go door-to-door and empower ourselves and our neighbors, especially those hurting most in our destructive system.

Paying my rent by temping as a "Kelly Girl," I set out to try to enlist in this war for a better America. But how? And with whom?

I'd heard of a brand new front in the War on Poverty, the Neighborhood Renewal Program run by the Philadelphia Housing Authority. Its goal was tackling the deplorable housing conditions in Philly's poor communities. Housing inspectors were instructed to get tough on negligent landlords, and aid was offered to help renters buy their row houses in the rundown section of Germantown where I lived.

But there was more to the strategy.

Some in the Housing Authority shared wholeheartedly the Great Society credo of "maximum feasible participation," in which dignity and self-assertion were as important as any brick and mortar undertaking.

And that's the door that opened. It turned out that in addition to hiring actual housing inspectors, some gutsy folks launching the Neighborhood Renewal Program also began hiring organizers. They were hush-hush about it, but my bosses made clear: Pass the test to get on the payroll as an inspector but hit the streets as an organizer. In ending poverty, it's not enough to have dwellings in better repair if their inhabitants feel defeated. So just as critical as holding landlords to account was, in their view, going door-to-door to help spark what we'd now call self-organized initiatives. Coming together, poor people will find their voices and push for their rights, thereby helping, much more broadly, to right our broken system.

So, to pass my housing inspector test, I got coached: "When a landlord offers you a pen, do you accept it?"

Correct answer: "No." I accept nothing, ever, from a landlord.

The rest I pretty much had to figure out on my own. I'd heard about the Welfare Rights Organization that took off nationally the year before.

My direct supervisors encouraged me to start knocking on doors in the depressed, almost-all-Black area in the heart of Germantown. I'd tell the women I met about this organization and their rights as tenants and, in most cases, welfare recipients. I'd make the case that together they could at least get the help Americans are entitled to under the law.

I was 23 and white -- with a southern accent, even. I was nervous. But I soon found that door after door opened, and I was welcomed in. Friendships blossomed. In the heart of Germantown, my new allies and I met in a community center and learned about welfare law and our rights -- and we planned our actions. A main tactic was to demand a "Fair Hearing" before welfare department officials at which a welfare recipient could make her case.

We also organized an action against the Salvation Army. The women I worked alongside were deeply offended that, because their welfare checks were too meager even to clothe their kids, they had to turn to the Salvation Army; before any help was forthcoming, they had to sit through intrusive grilling on their moral rectitude. That had to stop, we demanded. Ours was a rally for dignity.

Back in the office I shared with real inspectors, I was always ill at ease. I assumed they whispered about me: "Just what does that girl do?" I even wondered if after hours they rifled through my trash.

Soon enough, women were interested, and we created a real welfare rights chapter: the Northwest Philadelphia Welfare Rights Organization. In my City of Philadelphia car, I transported our members to and from city-wide meetings of the organization.

I felt connected to the dozen or so of us who met regularly to share our job search and childcare struggles and to strategize together. But I did have my favorite -- Lilly. Her spunky spirit really lit me up. I knew she struggled so hard to keep her kids fed, clothed and warm. Paying coal bills was especially tough. Lilly was in her 40s.

Then one day I got the call. Lilly had just died of a heart attack. "Would you and Marc [Lappé] come to the funeral and wake?"

I couldn't believe we'd lost Lilly. Part of a funeral in a Black community for the first time, I was so relieved to find I could cry openly, and at the wake I could hug and be hugged all I needed. But Lilly's death hit me hard.

I knew in my heart that Lilly had not died of a heart attack. She had died of the stress of poverty. That truth stayed with me, and the following year I began graduate school in Community Organizing at UC Berkeley (in a program that no longer exists).

Then came the moment -- the "Lilly's truth moment." Working on "fair housing" in racially segregated Oakland as part of my grad program, one morning I woke up with this thought: I can't do this anymore. I can't do anything to "save the world" until I understand how it contributes to uprooting the causes of Lilly's needless death.

So, starting with Diet for a Small Planet, I've spent decades pursuing that root-cause question, and, thank God, I have come to grasp how, within a systemic vision, bottom-up organizing is truly central to transformative democratic change. What's heart breaking to admit, though, especially in this anniversary year, is that as a society we lost our way.

Imagine if over the last half century we'd kept going... if we'd raised the minimum wage instead of letting its value sink, if we'd protected labor rights, if we'd made taxes fair as we prioritized full employment, stellar public schools and affordable higher education -- and if in the process we'd cleansed our politics of corporate dominance. Imagine.

In this moment, though, I just hope that in reliving how Lilly's needless death forced me to dig deeper I'll rekindle my own belief in possibility: the possibility that today's staggering inequality - with 95 percent of all income gains since 2009 going to the top one percent -- could trigger a rebirth in America of a sustained quest for root-cause solutions with everyday citizens in center stage, a possibility just as unimaginable by most people today as was the War on Poverty before January, 1964.