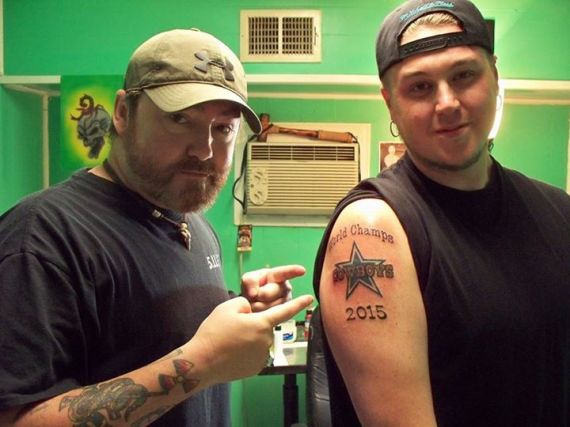 Back in August, Dallas Cowboys fan Derek Allgood got a tattoo on his right arm predicting that his team would win the NFL Super Bowl in 2015. Unfortunately for Allgood, although his team made it to the playoffs this year, the Cowboys were eliminated by the Green Bay Packers last Sunday, Jan. 11, after a controversial call in the last quarter.

The Huffington Post reached out to the tattoo artist, Terry Boren, who gave Allgood the design at Skorpian Ink Tattoo in Universal City, Texas. Boren explained that he has been tattooing Allgood for awhile and has known him for a couple years, but this job was both out of the ordinary and unexpected. Allgood had initially been coming in for something more low-key when a friend escalated the appointment:

[Laughs] he came to me and said, "I want a dallas cowboys tattoo," which I was good with. [Laughs] We're getting ready to start and a friend of his just said, "You know, why don't you put 'World Champs 2015' on that?" And I'm going, "Naw, man. Come on, that's a little much." But I probably asked him at least 87 times whether he really wanted that on there about the time I was starting, because I had to start from the bottom up at the 2015. I was just asking him over and over just to make sure.

Since Allgood occasionally promotes Boren's work, the tattoo only cost "around $100." Allgood has a radio show called The Billy Madison Show and is a bit of a "celebrity" around the area. The antics of Allgood's radio co-hosts have ended up the show "Tosh.O" on Comedy Central.

Boren hasn't heard from Allgood since the game, but has listened to the radio show where Allgood has "been whining about it." Boren, who typically does tattoos such as recreations of Picassos and Dalis and not NFL tattoos, but will "give anybody what they want if they're willing to pay the price," said while laughing, "I do need to send him a text to come see me."

HuffPost reached out to Allgood, but did not immediately receive a response.

An initial tweet back in August from Allgood recommending Boren:

Allgood after the Cowboys were eliminated:

Not doing a damn thing too my tattoo. My prediction was flat out robbed from me. Im not gonna hang my head in shame over that bullshit.

Making a joke about the NO RAGRETS tattoo from "We're the Millers":

Sharing a meme about his tattoo:

By far the best one pic.twitter.com/2FhPvbdqjD

Later, Allgood shared a picture of the tattoo in its current state:

Joke is on whoever thought my tattoo was fake.... Ya, haha. Dummies...... boom. Got em. pic.twitter.com/h3Ld6HdfPB

So, will Allgood edit the tattoo now that the Cowboys have been elimated? "He has stated explicitly that he does not want to change that tattoo, he wants to leave it," Boren said. Boren has also proposed adding coloring or alterations, "But nope, he wants to leave it."

1
Eric "Lizardman" Sprague
Huffington Post / Buck Wolf
Eric Sprague, who goes by the name Lizardman (further explanation not needed), has spent over 700 hours getting his entire face and body tattooed for his reptilian appearance. On top of that, Lizardman had teflon implanted on his forehead to create horned ridges, teeth filed down to points and his tongue cut into a slit. "I'm a big Godzilla fan," Sprague told HuffPost.
2
Julia Gnuse
Huffington Post / Buck Wolf
Julian Gnuse holds the Guinness World Record for most tattooed woman in the world, with over 400 tattoos covering 95 percent of her body. Starting in 1991, her first tattoo was an octopus. After developing porphyria in her 30s, a skin condition that leaves her body scarred when exposed to sunlight, Gnuse decided to cover up with these awesome tats.
3
Amund Dietze
Milwaukee Art Museum
Artist Amund Dietze got his first tattoo in the early 1900s at the age of 14, and just kept on going. With tattoos from neck to feet, Dietze was a tattoo pioneer, opening up his first parlor in 1913, where he was dubbed the "Master of Milwaukee." His body tats included a cowgirl, a Navy ship and Chinese dragons.
4
Maria Jose Cisterna
Presscot McDonald / Courtesy of Ripley Entertainment
Maria Jose Cristerna, a 35-year-old former attorney from Guadalajara, Mexico, is better known as the "Mexican Vampire Woman" thanks to her full-body tattoos and titanium horns implanted in her skull. Cisterna was immortalized in a full body cast form thanks to Ripley's Believe It Or Not. "It's my vampire dream to be immortal!" she told HuffPost Weird News through a translator.
5
Matt Gone
Getty
Matt Gone, better known as the Checkered Man, has 98% of his body covered in tattoos. What originally started as getting a few tattoos to cover up some muscular anomalies caused by Poland's Syndrome grew into a full blown tattoo addiction. "I would like to marry a heavily tattooed woman who works a real job," he said in an interview with Big Tattoo Planet.
6
Isobel Varley
Getty
British woman Isobel Varley has 93% of her body covered in tattoos, giving her the Guinness world record for the most tattooed senior citizen at 75 years old.
7
Geoff Ostling
Getty
Retired teacher Geoff Ostling shows off his intricate, nature-inspired tattoos. He has pledged to donate his skin to the National Gallery in Canberra after his death.
8
The Enigma
AP
The Enigma, born Paul Lawrence, has his body covered in a giant blue jigsaw puzzle. Enigma is a performer, musician, and actor, having a cameo on the hit 90s show The X-Files.
9
Rick Genest
Rick Genest
Rick Genest is a walking zombie skeleton, complete with his head shaved and a brain inked in in place of hair. The inspiration for Genest's tattoos come from his appreciation of the fragility of life after he recovered from a brain tumor.