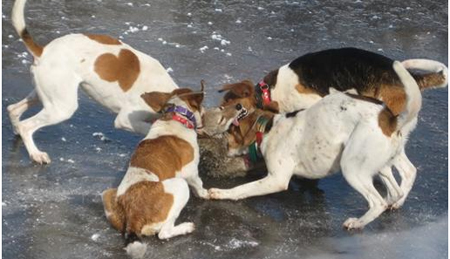 When a famous NFL quarterback, Michael Vick, admitted he was the owner-operator of a dog fighting ring, most Americans were shocked and rightly outraged. We've laid down the law that entertaining ourselves by pitting one animal against another in bloody combat is cruel and unethical - and demanded that it be illegal in all 50 states. However, few Americans are aware there is "entertainment" that is even nastier than dog or cockfighting, and is actually legal in several Midwestern and Southeastern states. It's called penning and it involves sending packs of domestic dogs into a fenced-off enclosure to chase to exhaustion and often tear apart a captive coyote or fox. Penning has existed for decades but, ironically, may have benefited by the fact that few have ever heard of it.

Until now. This sadistic practice is beginning to enter public consciousness in a number of states including Indiana and Florida and a more constructive debate is ensuing. In his column ("Let's put an end to pens for coyotes and foxes", 6.18.10) Eric Ernst of the Sarasota Herald-Tribune writes,

"They may call it hunting, but that's an insult to real hunters. In this case, wild coyotes or foxes are trapped, packed and shipped to fenced areas where they are turned loose to run for their lives, day after day, from a pack of dogs. If the dogs don't maul them to death, the wild animals die of disease. Incredibly, the Florida Fish and Wildlife Commission, an agency entrusted with managing the state's natural resources, has sanctioned the practice for more than 20 years. That could change soon. Next week in Orlando, the commission will decide whether to ban the fox/coyote pens, phase them out by 2013 or let them continue to operate under stricter rules. The vote here is to ban."

In Florida, a recent undercover investigation of penning operations led to the arrest of 12 people and the issuance of 46 citations for various violations related to the illicit black-market trade in live foxes and coyotes for penning purposes. Public outcry then led to a temporary statewide ban on the practice in February. Now the Commission will decide whether to regulate or ban this practice altogether.

Project Coyote and the Animal Welfare Institute (AWI) along with more than 60 scientists, wildlife biologists, veterinarians, ethicists, and attorneys, have sent a formal letter calling on the Florida Fish & Wildlife Conservation Commission (FWC) to abolish "penning" at the upcoming hearing.

"We believe that the FWC needs to take a firm stand in banning this practice altogether. If the proposed rule (to regulate pens) is approved, the FWC will be legalizing a practice that runs counter to fundamental concepts of wildlife management and violates the principle of fair chase."

Wildlife agencies in several other states have serious concerns about penning, including transmission of diseases such as rabies. In 2008, the Midwest Association of Fish and Wildlife Agencies passed a resolution urging the

"adoption of state-by-state regulations prohibiting the importation or interstate movement of foxes and coyotes for the purpose of stocking coursing pens or for release and pursuit by hounds outside of coursing pens."

Americans recognize that dog fighting and cockfighting are unacceptably cruel and that such spectator events don't have a place in civilized society. How different is penning? As Ernst summed it up:

If you live in Florida, please attend and testify at the upcoming FWC meeting in Lake Mary (near Orlando) in support of a permanent ban on all coyote/fox pens statewide. Tell your Florida friends to attend too! If you cannot attend, email or write to the FWC. Penning supporters are a very small, but very vocal minority in Florida. The FWC needs to hear from Florida residents and visitors, who want to see coyote/fox pens abolished.

It's time again for society to stand up, and shout a collective NO to another cruel, unethical and dangerous blood sport -and make penning illegal in all 50 states. Our shock and outrage can help relegate coyote and fox pens to their rightful place in America's dark past.

The Florida Fish and Wildlife Conservation Commission is accepting public comments on the issue until June 23rd. Comments can be submitted online at:
myfwc.com/RULESANDREGS/Fox_CoyotePublicWorkshops.asp

More information about the June 23rd hearing in Lake Mary, Florida can be found here: http://myfwc.com/COMMISSION/Comm_2010.htm#June