Yesterday I, a Chicago Public Schools history teacher, a father, and husband, was arrested for sitting down on La Salle Street in front of City Hall and refusing to move when asked to do so by the police. I, along with nearly 150 others, was taking part in an act of civil disobedience against the school closing policies implemented by Mayor Rahm Emanuel, Barbara Byrd-Bennett and the CPS Board of Education. 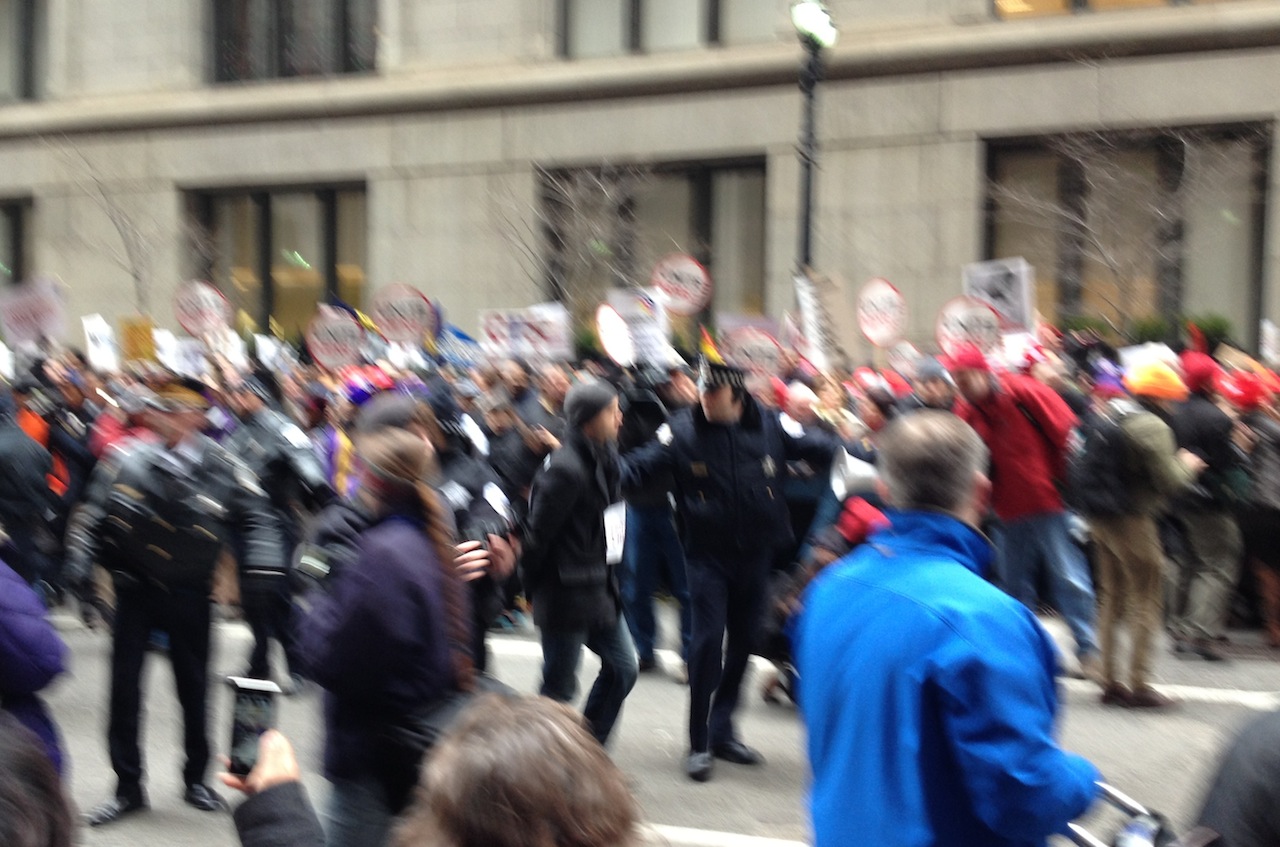 You see, those of us who chose to get arrested and the other couple thousand marching legally against the CPS plan to close 54 public schools are beyond frustrated that we live in a city that is governed by lies and press releases.

The "justifications" that CPS is using to try to convince the public how necessary it is to close public elementary schools in African-American communities are typically these main four points:

In two separate reports by Catalyst and by CReATE, both studies found that school closings either do not save any money or it only saves a very miniscule amount of money.

2) CPS has been toting an alleged $1 billion budget deficit, which is again not true. CPS actually has a $500 million SURPLUS, not deficit.

3) The formula that CPS uses to determine if a school is "under-utilized" is not a valid measure of deciding under utilization, according to research done by Raise Your Hand Illinois.

4) CPS claims that students from closed schools will go to "better" schools. Again, this is untrue, according a report released by the Sun-Times.

So with all this in mind, when I was originally asked if I was willing to participate and be trained for a civil disobedience that would lead to my arrest, I stopped to think:

How much longer can I go on letting my students in Englewood be treated as second-class citizens by a school system that says it cares about them?

I believe and am constantly telling my students that if you work hard enough you can overcome many obstacles in life. The issue is that CPS has forced my school (and many like it) to have to get rid of our librarian, second counselor, attendance clerk, technology coordinator, schools accountant, and only have half a nurse for a half day on Fridays all in the name of "budgetary reasons." It seems to me that our mayor and CEO, no matter what they claim about their policies not being racist, are very much in fact promoting and implementing racist policies while letting institutional racism permeate through this district.

Before the disobedience I also thought of my one-year-old son and what kind of person I want him to be. I thought of my wife, who is an amazing CPS teacher, but because of many of the harmful CPS policies like schools closings sometimes she thinks about other careers besides teaching that she could do.

I thought of every person who inspired me to be a history teacher and all the amazing actions they took. I knew that I had no choice but to participate in this act of civil disobedience.

While I sat on the cold cement among lunchroom staff, custodians, teachers, and clergy, I couldn't help but feel angry that we live in a society that tries to close public schools. While sitting on the ground next to a man in his seventies with bad knees waiting to be arrested, I couldn't help but wonder how many more arrests will it take before this mayor actually listens to the people?

While the police treated all of those arrested with the upmost respect, while the crowd of protestors cheered for us and our disobedient actions, I thought to myself we get arrested for sitting on the cold cement in front of city hall, yet our mayor is legally allowed to close 54 public schools and praise that his actions are a positive step for communities he never even visits.

This whole fight around school closings and public education comes down to whom will you believe?

Will you believe a mayor who sends his kids to one of the best private schools in the state with art, world languages, counselors, and resources?

Will you listen to Barbara Byrd-Bennett, who was responsible for closing public schools in Detroit in the name of "what's best for the community"?

Or, will you listen to the students, parents, clergy, school employees, and people of the communities where these schools are located that are demanding and have been demanding that NO schools be closed?

As Gandhi eloquently stated, "All through history the way of truth and love has always won. There have been tyrants and murderers, and for a time they can seem invincible, but in the end they always fall, always."

Remember everyone this is our 4th CEO in three years and Barbabra Byrd-Bennett will soon be gone like Brizard, Manzany, and Huberman.

Our mayor only has a 19 percent approval rating, so in a few short years hopefully he will be gone too.

The important thing is to make sure that NONE of their policies like school closings last any longer than either of the people attempting to implement them.

It will take many more arrests, sit-ins, occupations and forms of civil disobedience to bring these school closings to a halt, but once again to quote Gandhi, "First they (CPS) ignore you, then they laugh at you, then they fight you, then you win." CPS and the mayor are in a full on attack against truth and against democracy, but as we will see, truth always wins.