Nowadays, it seems the world is just littered with crises. But one thing we don't have to worry about is "Crabzilla."

A photo depicting what appears to be a 50-foot crab hanging out near a wharf in Kent, England, started making the rounds on the Internet earlier this week. The photo was featured on a local curiosities site called Weird Whitstable, and eventually dubbed "Crabzilla." 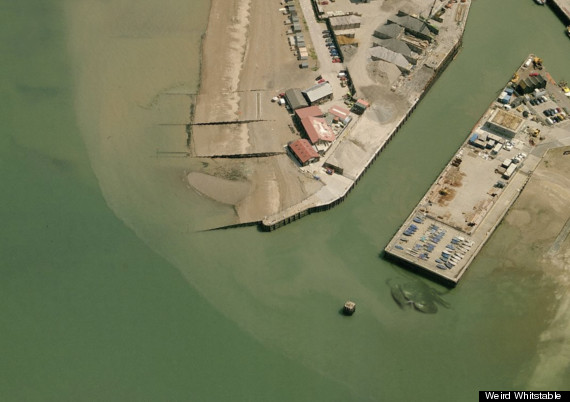 Quinton Winter, who runs the site, told the Daily Express that he'd spotted a giant crab in the mouth of Kent harbor while on vacation with his son last year. “It had glazed blank eyes on stalks, swiveling wildly and it clearly was a massive crab with crushing claws," he said.

"Does this satellite photo of the harbor reveal a giant crab or unusual sand formation?" Winter asks on his website.

"The idea of a giant 'crabzilla' would [be] very exciting. Unfortunately, I think this is a hoax," Dr. Verity Nye, Ocean and Earth Science researcher at Southampton University, told the Daily Mail. "I don't know what the currents are like around that harbor or what sort of shapes they might produce in the sand, but I think it's more conceivable that someone is playing about with the photo."

Spider crabs, the largest known to British waters, grow to about 4 feet and inhabit much deeper waters than the those near the pier where Crabzilla is shown lurking.