Wynwood's rapid transformation into Miami's arts district has been so remarkable, it just rated a glowing exploration in the New York Times.

But what if the ol' Grey Lady knew the neighborhood has just been de-gentrified by a crack-fueled lunatic on a sword-wielding rampage?

That's not actual Miami history, though it wouldn't be all that surprising if it was. Instead, it's the plot of "Crackhead Katana," a gritty short about Wynwood commissioned by the Borscht Film Festival, where it will premiere alongside other Miami-made films Saturday night.

The film, a sort of alternate take on the serious changes in the arts district, is the brainchild of professional stuntman and first-time director Eric Mainade. Like current Borscht faves Julian Yuri Rodriguez and artist Jillian Mayer, who got their start in craft services, washing cars and gripping, Mainade began his Borscht career behind the scenes.

"During [Borscht 7 film] 'Play Dead', Eric was our stunts coordinator. He set himself on fire for that film, and that's when we realized, 'Hey this guy's kinda cool. We like this guy! We should work with him more often,'" said producer Jonathan David Kane. "He mentioned that he had this idea, and it was so outloundandish we decided to make it."

Outlandish, indeed. Not only does the film's main character slay 15 people in the span of two minutes, but one of them is well-known Wynwood gallerist Brook Dorsch, who is tossed off the roof of a building. Another passerby's head is sliced open, there's a 50-foot fireball and a man's face goes in flames -- not your average night at Second Saturday Art Walk, despite what its detractors say.

"The film's about a crackhead slicing up arts patrons with a katana sword," Kane laughs. "Can't ask for more than that."

HuffPost Miami photog Jipsy got a look at the set after Thanksgiving, when the "Katana" crew was filming fights and fire in an old RC Cola factory. Check out the behind-the-scenes below: 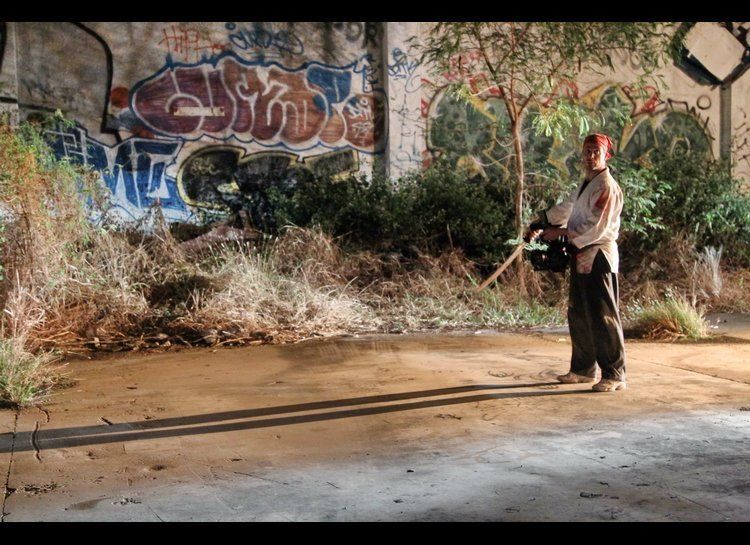