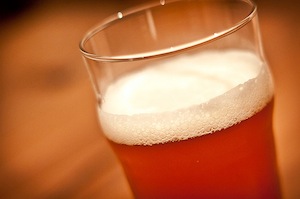 To truly understand and appreciate craft beer, and to communicate about it with friends and enthusiasts, it helps to know the terminology used in the beer world. Expanding your craft beer vocabulary can help you better understand the differences between different styles and appreciate your beer more. For beer newbies and longtime enthusiasts, this beer glossary covers all the beer jargon, beer terms, and beer descriptors you need to know to enjoy drinking craft beer.

The Basic Ingredients of Craft Beer

There are four basic ingredients used to make beer: malt, hops, yeast and water. Depending on the style of the beer, other ingredients such as grains or even fruits and spices may be added. These are the basics.

Malt: The base grain for all beer, malt is almost always made from barley. (However, wheat is used in addition to barley for particular styles of beer such hefeweizen or wheat beer.) Malt is created by soaking barley in water and allowing it to germinate before drying and kilning it. This process enables the production of enzymes, which, during the brewing process, will convert starch into fermentable sugar. The kilning process can also result in malt with characteristics that impart different flavors and colors in the final product.

Adjuncts: Other un-malted grains or sugars that are added to a beer to create different flavors or colors. Some examples are oats, rye, wheat, rice and corn. Honey and other sugars also fall into this category.

Hops: A green climbing vine that produces a flower in the shape of a green cone. After being harvested, the cones are dried and then used to make beer, lending bitterness and aroma. The aroma differs by variety. Popular varieties of hops in craft beer include: Cascade, Centennial, Amarillo, Chinook, Saaz, Northern Brewer, Willamette, Mt. Hood, Goldings, Tettnang, Fuggles, Northern Brewer and Hallertau.

Lager yeast: A bottom-fermenting yeast used to make lager-style beer. Lager yeast ferments best at lower temperatures, such as cellar temperatures that range from 40º to 50º F.

Brettanomyces (aka "Brett") and wild yeast: A special yeast used to make sour or wild beer. Usually, brewers and winemakers try to prevent this yeast from getting into the beer. However, barrel-aged and sour ales almost always have Brett or another "wild" yeast strain in order to produce the acidity and funky aromas.

Craft Beer by the Numbers

If you look at the side of a bottle of beer from Southern Tier Brewing Company or Rogue Ales, you'll notice that they list the ingredients as well as some numbers about the beer, some of which might seem cryptic. Here's what they mean.

ABV: Alcohol by volume. This is a measurement of the amount of alcohol in the beer.

º Plato: A measurement of original gravity. This term is used in both the wine and beer worlds.

IBU: International bittering units. Although sensitivity to bitterness will vary from person to person, this is an objective measure of the bitterness of a beer. This number is based on the amount of a natural resin (known as "alpha acids") in the hops, how much hops are used, and when the hops are added to the beer.

Some breweries will use beer-making terminology to describe certain aspects of their beer. They might even use that terminology in the name of the beer itself. For instance, just after the hop harvest you might see a beer named "Wet-Hopped Ale." Here's what those terms mean.

Mash: A product of the brewing process, mash is what occurs when the malt and adjunct grains are steeped in water at a specific temperature, usually around 150º F or more. Steeping the grains activates the enzymes in the malt, which in turn converts the starch in the grains to sugars, a majority of which will be fermented by the yeast.

Wort: The sugary solution that is collected from the mash and then boiled. Beer is called "wort" until it has been fermented, at which point it becomes beer.

Boil: A step in the brewing process when the wort is boiled and hops are added to the brew. Boiling removes certain compounds from the wort, stops the enzymes that were activated during the mash, and sterilizes the wort. The boil typically lasts 60 minutes but can be longer depending on the brewer. For instance, Dogfish Head 90 minute IPA is boiled for 90 minutes.

Bittering hops: Hops that are added to the beginning of the boil, resulting in more bitterness and less aroma in the final product.

Aroma hops: Hops that are added at the end of the boil, producing less bitterness and more aroma in the final product.

Dry-hopped: Refers to the addition of hops after the boil, during transfer to the fermenter, in the fermenter itself, or even after fermentation. This technique adds a lot of hop aroma without adding much more bitterness to the beer.

Wet-hopped (aka "fresh-hopped"): Normally hops are dried before being used to make beer. Wet-hopped beer uses hops that have been freshly harvested and not dried, producing unique flavors and aromas. These beers are produced after the hop harvest in August and September and area usually ready by late September or early October. Drink your wet-hopped beer as fresh as possible.

Fermentation: After the boil, the wort is cooled and transferred to a sterile fermenter, where yeast is added. Yeast eats the fermentable sugars and produces alcohol and carbon dioxide, thus fermenting the beer. Different varieties of yeast can result in different flavors in the beer. A beer made with a Belgian strain of yeast is much different than one made with a Californian strain of yeast.

Conditioning: The process of maturing and carbonating the beer. It is the last step before the beer is ready to drink. Carbonation can be added through natural conditioning in the bottle, cask or conditioning tank. Beer can also be force-carbonated.

Beer geeks use a lot of ways to describe the beer they drink. The following are some common beer descriptors that you might hear a beer geek use.

Hoppy: A beer that strongly exhibits the flavor and aroma of hops. Since hops can have many different flavors and aromas, it's hard to pinpoint exactly what somebody means by "hoppy." Typically, the beer is bitter and smells like citrus, pine resin or flowers. Other popular hop aromas include herbal or earthy.

Malty: A beer that strongly exhibits the qualities of the malt. The flavors and aromas of a malty beer may be described as grainy, barley-like, syrupy, roasty, fresh sweet toasty bread, and cooked sugar. Maltiness is not a measure of the sweetness of a beer because many malty pilsners are not sweet. A beer can be both hoppy and malty.

Head retention: The foam that rests on top of the beer after it has been served. Retention is how long the head lasts in your glass. The head will exhibit aroma attributes of the beer that are not found after the head has died down. For this reason, as well as aesthetic and stylistic reasons, a beer with a good long-lasting head is desirable. Although a vast majority of beer styles call for good head retention, it is not the case for all beer styles.

Mouthfeel: How the beer feels in your mouth. It can range from thin and watery to thick and silky. Most beers are somewhere in between.

Imperial: Beers that are described as "imperial" or "double" are larger versions of the style listed on the beer--not in volume, but in certain characteristics. For example, imperial beers usually have more malt, more alcohol, more sweetness, more bitterness and/or more hops.

Session: The basic idea of a session beer is that you can drink multiples of these beers over the course of an evening without falling off your stool. Some people are adamant that a session beer must have no more than 4% alcohol by volume, but the term is somewhat relative. A session beer could almost be considered the opposite of an imperial.

Beer is served from a variety of vessels. The bottle is the most common but even certain types of bottles have their own names.

Bomber: A 22-ounce bottle of beer.

Cask (aka firkin): A barrel-shaped vessel for both conditioning and serving ale. The beer is placed in this vessel, stored at cellar temperatures (48-56ºF), natural carbonation conditions the beer, and then the beer is served at cellar or room temperature (cellar temps are preferred). Casks are either connected to a special tap called a beer engine, or are served directly from a spigot in the cask.

Keg: A large vessel for serving beer on draft. Kegs come in many shapes and sizes. The typical keg is ½ barrel or 15.5 gallons. A pony keg is ¼ barrel or 7.75 gallons. A corny keg is 5 gallons. One gallon of beer yields ten and a half 12 oz. servings.

Can: Large breweries have been using cans for years but craft beer in a can is a recent development. Cans never impart a metallic flavor because all cans are lined with plastic so that the beer never touches metal until you pour it out. Cans are great for beer because the beer is never exposed to light, and cans are more airtight than bottles, preventing oxidation.

Growler: A big glass jug used to hold beer. Most brewpubs will allow you to buy and refill a growler.

Still want to learn more about craft beer? There are many great online resources to expand your beer vocabulary. CraftBeer.com has a wonderful glossary of beer terms and Wikipedia usually has a good definition of most beer geek jargon. Finally, to learn more about these terms in context, you can read craft beer reviews on blogs like mine, Beer 47.

What beer terms do you use to describe your favorite beer?

David Jensen is based out of San Francisco and is the primary writer and photographer for Beer 47, a blog focused on craft beer, beer events, cooking with beer, and homebrewing. In addition to the blog, you can frequently find David on Twitter as @beer47, tweeting interesting news and sparking up conversations about craft beer while sipping his favorite Double IPA. By day David is a software engineer for a small Internet company.

For Beer Lovers Only: A Craft Beer Glossary was originally published on The Menuism Blog.

Related Links from Menuism:
15 Craft Beers to Try Before You Die
All About IPA: A Primer on India Pale Ales
All About American Pale Ale
Craft Beer Festivals: A Survival Guide