In many ways, life is worse in 2013 than it was in, say, 1963: There's more terrorism, American income is distributed less equally, and the planet's climate is hotter. So it's important to occasionally take a moment to remember the few things that have improved in the last 50 years. We live in the golden age of television, board games and craft beer, for instance.

But one big thing sets craft beer apart from these other two vital art forms. It's not just critically-acclaimed, like "Enlightened" or "Agricola." It's popular.

Sales of craft beer have grown tremendously over the past five years, while sales of beer made by major brewing conglomerates Anheuser-Busch and MillerCoors stayed flat or fell. Recently-released data on the craft beer industry show that 2012 was an even better year for craft brewers than 2011, 2010 or 2009, all of which were strong. Last year, sales of craft beer grew 15 percent by volume, to 13,235,917 barrels, and 17 percent by value, to $10.2 billion.

Craft beer is still a relatively small part of the industry. Beer made by the country's 2750-plus craft brewers represents just 6.5 percent of the total -- insignificant compared to the blockbusters produced by the "Big Two," which together control 74 percent of the market by volume.

Yet last year's annual reports for Anheuser-Busch and MillerCoors show that these two companies sold 6 percent less beer, by volume, in 2012 than they did in 2009. Basic geometry tells us that, if these trends continue, craft beer and the big two are on a collision course. At some point soon, in other words, craft brewers could produce more beer than the Big Two. But when?

HuffPost Full Plate did a little amateur Excel work to find out. I forecasted future sales of beer made by craft brewers and The Big Two using their growth rates for 2012 alone, and then the aggregate growth rates for 2009 through 2012 to find out when craft might eclipse mainstream if current trends were to continue. That's such a gigantic "if," for reasons I'll explain in a moment, that there's virtually no chance that these "forecasts" have any predictive power whatsoever. But it's still an interesting thought experiment.

I found that if craft beer sales were to keep growing as fast as they did in 2012, they would pass Big Two beer sales by value as soon as 2020, and by volume as soon as 2033. The more conservative estimate put the intersection at 2031 by value and 2041 by volume. Here are some graphs of the latter simulation! 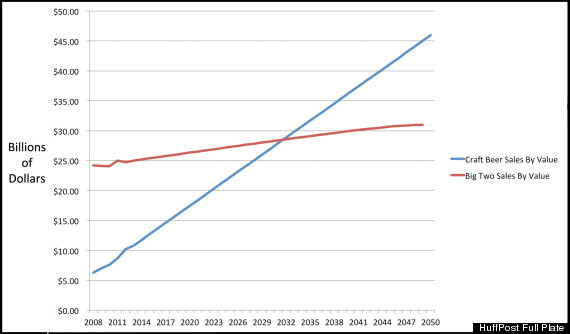 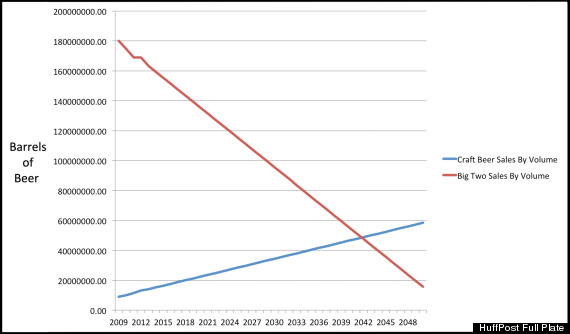 Of course, there's pretty much no chance the data will look anything like these graphs. They're not even 100 percent accurate for past years: in their annual reports, Anheuser-Busch combines U.S. and Canada, and MillerCoors combines sales of its brands with sales of the Pabst beers it brews on contract -- so the "Big Two" are slightly inflated. Going forward, the predictions for volume, in particular, are probably off; if they're right, Americans will be drinking about half as much beer as they are today in 2040, which isn't very likely. There's also a good chance that the Big Two will regain their bearings, either by developing new, better-tasting beers or by acquiring more brands. Additionally, the craft beer industry could decelerate, or even shrink, in coming decades.

Told about these projections, Beer Marketers Insights data whiz Eric Shepard was quick to note that craft beer took a tumble around 2001 after a period of growth in the '90s, making continued double-digit growth a relatively unlikely proposition. But, he agreed that the general assumptions of the thought exercise were sound.

"I think it's probably fairly safe to assume craft is going to remain strong for a while," he told HuffPost.

"Trending out more than a couple years is tough. Clearly the craft beer guys have already taken market share from AB and MillerCoors," he added. "How long that goes on, and how deep it goes, is anyone's guess."

If I had to guess, I probably wouldn't put all that much faith in my Excel spreadsheets. Underestimating the ingenuity of huge companies like Anheuser-Busch InBev is always dangerous. Ramping up production will be hard for many craft brewers, and some Americans will always prefer the smooth, bland taste of Bud Light to the edgier stylings of Victory HopDevil. (Indeed, craft brewers' emphasis on hoppy IPAs and intensely dark stouts could be a barrier to growth going forward.)