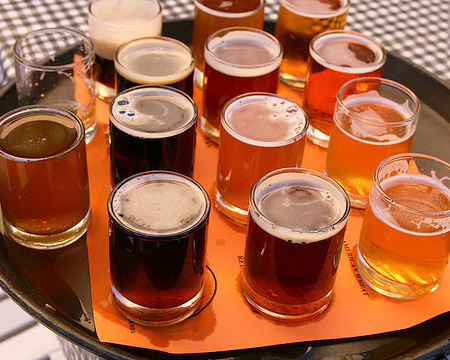 You may or may not have noticed, but we are suddenly in a golden age of beer consumption, the likes of which this country has not seen since around the time the light bulb was invented.

Back in the late 1800s, small, independent breweries numbered in the thousands. That number declined significantly toward the end of the century as consolidation and shifting demand for lighter, German-style lagers bumped a lot of craft breweries off the map. Then in 1920, Prohibition came along and effectively put a top kill on craft beer production, the effects of which would last until the 1980's. Just as the assembly line gave rise to the mass production and distribution of the "Big Three" automakers, the repeal of Prohibition propelled a handful of large national breweries like Anheuser-Busch and Pabst to capture nearly all of the market.

Now, as perhaps never before, great beer is greatly available. And if you're looking for it, you don't have to look far: According to the Brewers Association, more Americans have a craft brewery within 10 miles of their home than don't. And if you happen to be in the unlucky minority, there are summer beer festivals going on right now in almost every major city across the country. These are totally worth checking out, if for no other reason than to give yourself a crash course on just what these self-professed "beer geeks" have been up to for the last 30 years. Chiefly: fashioning pretzel jewelry and convincing themselves that kilts are about to make a serious comeback.

But whether you buy into the utility man skirt or not, today's crop of brewers and beer geeks are all about innovation, adding their own unique twists to historic beer styles and developing new ones without precedent. And, a lot of them are really good. So put down that Bud Light Lime, try a few of these, and then go off and uncover your own. You won't be sorry.