Can you envision yourself smiling appreciatively while watching a military plane bear down on its target? And no, I'm not talking about a Hollywood action movie. 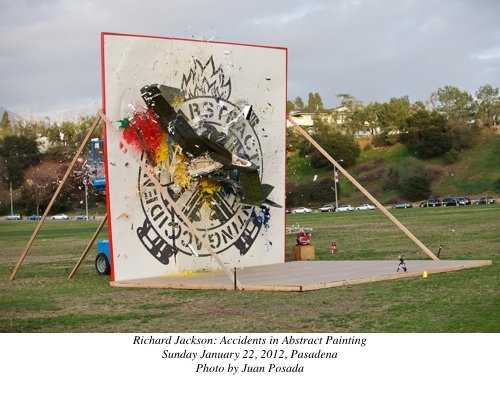 The people who gathered near the Rose Bowl in Pasadena on Sunday, January 22 were eagerly waiting for a spectacle. And a violent spectacle to be precise. A radio controlled, military plane with a 15-foot wingspan, was descending upon a target with the intention to blow it into smithereens. Loaded with gallons of paint, this plane crashed into a 19-foot wall bearing the words "accidents in abstract painting."

Entering the Armory Center for the Arts in Pasadena, you hear the noise of this plane's engine, and then you encounter a room full of the debris left from this crash. All that and more, courtesy of Los Angeles artist Richard Jackson, known for pushing the limits of the medium of paint and our understanding of what art is all about. 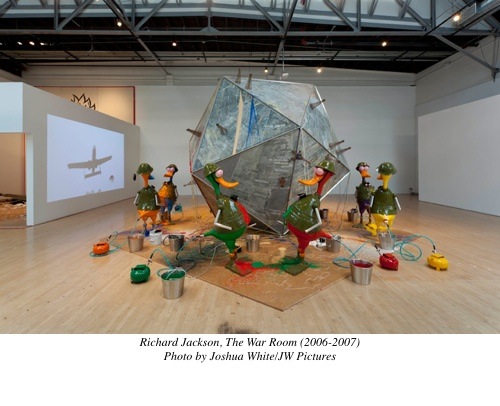 In the main gallery, there is another of Jackson's installations, The War Room, which makes merciless fun of the absurdity of war by casting gigantic colorful ducks as the generals involved in despicable activities. Let's just say that peeing on each other with paint is one of the least offensive things that they do. 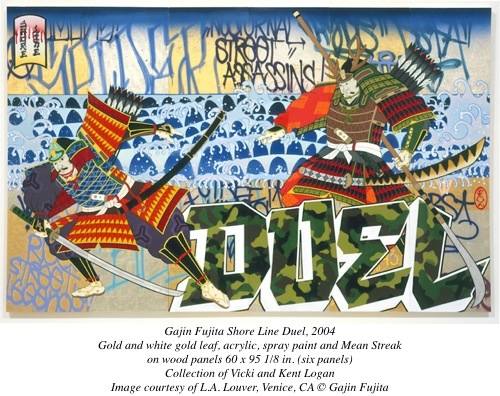 A few blocks away at the historic Pacific Asia Museum, I saw the exhibition of Gajin Fujita, another Los Angeles artist who often chooses violence as subject matter in his work. Inspired by classical Japanese woodblock prints, the artist paints scenes of fighting Samurais on wood panels covered with gold, platinum or silver leaf. He then invites graffiti artists to step in and infuse his work with their trademark explosive energy. The resulting work can be described as a friendly battle between highly disciplined traditional art and its edgy street cousin. This is a small exhibition, but it packs quite a punch. 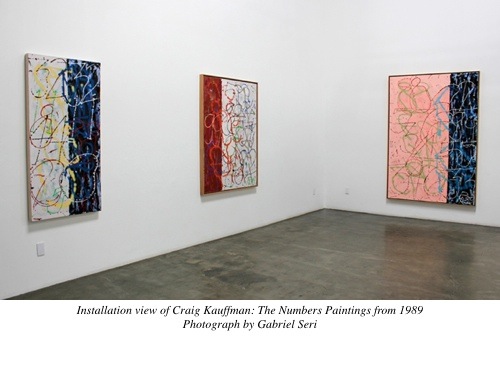 Closer to home, in Santa Monica, I saw a delightful exhibition of paintings by Craig Kauffman (1932-2010), one of the best known Californian artists, who passed away two years ago. Though known primarily as a sculptor, Craig Kauffman was also a highly original painter, as this elegantly installed exhibition at Frank Lloyd Gallery demonstrates. These so-called Numbers paintings were all made in 1989, soon after the artist's move to the Philippines. Each of the paintings consists of two rectangular shapes of different colors, connected by painted numbers floating over the picture plane. The numbers give to these refined abstract paintings a strange whiff of realism and a welcome touch of humor. 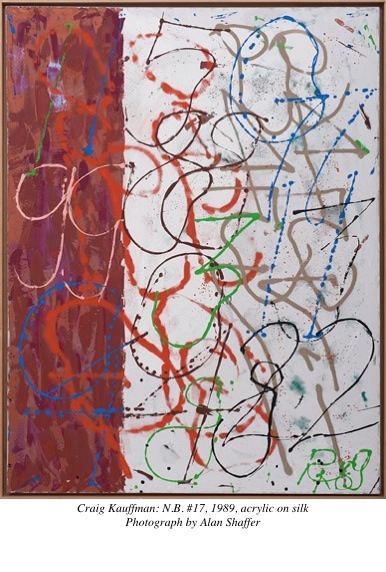