How long does it take a group of grown-ups to come up with a workable storyline for an 11-minute-long cartoon? Would you believe two days?

So says Craig McCracken, the talent behind those Emmy-Award winning Cartoon Network series, The Powerpuff Girls and Foster's Home for Imaginary Friends. Though -- more recently -- Craig has been riding herd on Disney XD's acclaimed animated adventure, Wander Over Yonder.

Mind you, this character-driven sci-fi comedy is probably a lot harder than most animated series to pull off. If only because Wander Over Yonder is built around an overly-optimistic intergalactic traveler and his loyal Zbornak steed, Sylvia. Who then spend each episode traveling from planet to planet helping people to learn how to live free and have fun. 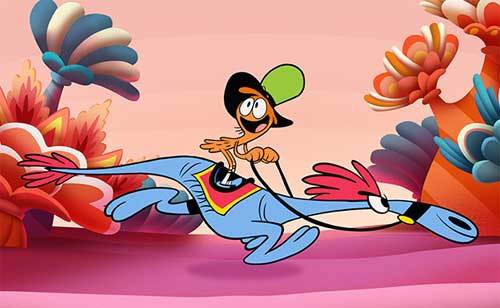 "And because Wander and Sylvia never visit the same place twice... Well, that means -- for each episode -- we have to come up with a new world and the people who live on that world. More importantly, we have to invent the problem that these people have which Wander & Sylvia will then try and solve," McCracken explained during a recent phone call.

And since we like it when -- over the course of an episode -- we can then give you a different insight about Wander or Sylvia... Well, that's we spend a full two days breaking Wander Over Yonder stories. I mean, you can't really tell a deep, rich story with lots of humor if you haven't first figured out what the overall tone of that episode should be. What the stakes really are. Which character has the most to learn from this particular storyline.

Which -- I know -- sounds like an awful lot of behind-the-scenes prep work, especially for an 11 minute-long cartoon. But as any fan of The Powerpuff Girls, Foster's Home for Imaginary Friends or Wander Over Yonder will tell you, Craig has a true gift for creating dimensional characters. Take -- for example -- Lord Hater, the galactic conqueror wannabe who's Wander & Sylvia's chief nemesis on this Disney XD show.

"You know, I couldn't bring this up to Disney when I was originally pitching Wander to them. But I've always felt that it's Hater's show," Craig said.

I mean, Wander's the star of the show. But Hater's the protagonist. He's the character that has the most to learn over the course of this show and is the one who most needs to grow. And so Hater's the character that you sympathize with the most because he's the most flawed. Whereas Wander... He's the guy who's kind of got it figured out, who's got his stuff together. I mean, Wander has some flaws. But he's really the guy who's guiding Hater to his future or wherever he's going to end up. 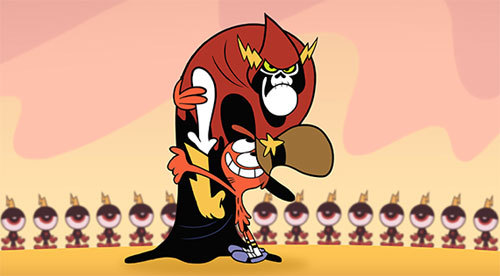 Which I know sounds kind of subversive. But here's the thing: McCracken likes playing with people's expectations when it comes to Wander Over Yonder. With the perfect example of this being "The Helper," the episode which debuts tonight on Disney XD at 8 p.m. ET / PT.

"The concept this time around was what if we sent Wander to a planet where no one needed his help," stated Aaron Springer, who not only wrote & storyboarded "The Helper" but also directed this Wander Over Yonder episode.

Just like with all the other episodes of 'Wander,' the writing sessions for this show were a group effort. And we spent those first few days talking about the many ways we could possibly frustrate Wander. And in the end, the story idea that seemed to have the most potential was that he's just unable to actually complete the acting of helping. Once that became the thru-line for this episode, we could then come up with all the gags and character-driven moments that we needed for this show.

"And what's great about Aaron is that -- when he draws -- his storyboards have this very Moebius-meets-Gary-Larson quality," Craig enthused.

Which is kind of outside Wander's usual show style. But we liked so much of what Aaron had drawn, the characters that he created for this particular planet that we decided that we didn't want to change that. So rather than lose the aesthetic quality of what Aaron designed, we kind of modified 'Wander' 's show design style so that it would then fit better with what Aaron had done with his boards. 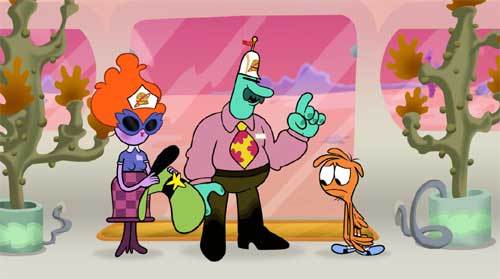 Which -- again -- maybe isn't what you'd expect to hear about a TV show that's being produced by The Walt Disney Company. But here's the thing: The people at Disney Television Animation just love Craig McCracken. They're thrilled that -- after spending 15 years at Cartoon Network -- he's now decamped to Disney. Which is why DTA is willing to give Craig lots of creative freedom when it comes to Wander Over Yonder.

Of course, the downside of doing that is McCracken & Co. sometimes come up with ideas that prove difficult for Mercury Filmworks (i.e., the overseas studio that actually animates Wander Over Yonder) to produce. Take -- for example -- "The Void," the recent episode where Wander & Sylvia find a door just floating in space. Once these two step through this door, they find themselves exploring a white feature-less void."

"Given that we've been forcing our art directors to come up with all of these new worlds and the creatures who then live on these weird planets... Well, we thought that 'The Void' might be a nice break for them," Craig recalled.

But from a production standpoint, what we didn't realize is that -- when you're producing animation digitally -- a scene can only be so long before a computer can't then render it anymore. And since what we had just sent the folks at Mercury Filmworks was all of these really long scenes with characters acting on a white background... Well, we wound up making it extremely hard for them to render this particular episode. And we were like 'Oh, we had no idea that this would an issue.' So the one thing that we didn't think would be hard actually turned out to be pretty difficult. 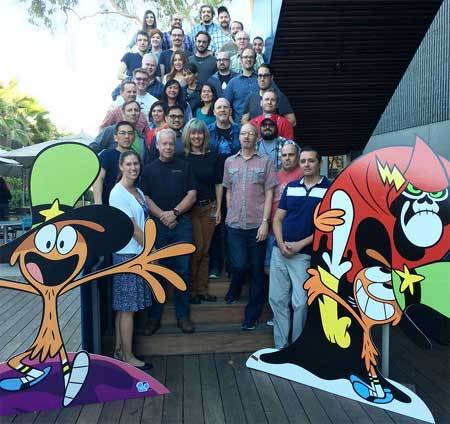 You should expect to see other innovative Wander Over Yonder episodes to pop up on Disney XD in the coming weeks. In addition to the two that are bowing tonight (i.e., "The Big Job" & "The Helper"), there'll be three new episodes on this cable channel in the coming weeks. "The Funk" & "The Enemies" on November 25th and "The Rider" on November 28th. Not to mention a special holiday-themed episode which will drop next month sometime that will then revisit an earlier, especially popular Wander Over Yonder episode, "The Gift 2: The Giftening."

And the best part about working on a show like Wonder Over Yonder is that -- because Wander & Sylvia are always on the move, always going someplace new -- from a creative standpoint, you're never locked in. You never find yourself in the situation that people who work on other animated series often find themselves in. Where they basically have to make the same episode over & over & over again. So they then struggle to find different ways to tell the same story.

McCracken concluded, "Whereas on Wander Over Wonder, we never tread the same water. We always kind of do brand-new things."

Except -- of course -- for that two day-long process when Craig and his team follow in order to break the story of every new Wander Over Yonder episode.