"Zou Bisou Bisou," the saucy ditty performed by Mad Men's equally saucy Megan Draper, played by Jessica Paré, didn't come with a dictionary. The only translation you needed was her strut, her snap, her stupefied yet leering husband Don Draper (Jon Hamm) and that big-sleeved-black-dress and patterned-hosiery combo suggesting a bat paired with Spider-Woman.

Yet all I could think about while watching her was David Costabile and his mesmerizing performance of "Crapa Pelada" at the end of the third season of Breaking Bad, while he nimbly watered his plants. You didn't need a dictionary for that one, either. 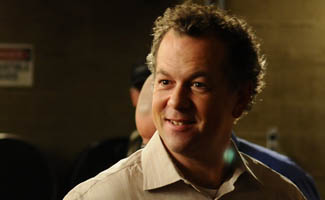 Shortly before White figures out Fring's plan, we get a glimpse of the imaginative side of Gale, largely through his rendering of "Crapa Pelada," arguably AMC's progenitor of "Zou Bisou Bisou."

1. No rehearsals. In contrast with the reported 18 hours of rehearsals for Paré, Costabile told me that Breaking Bad's music supervisor simply gave him a digital version of "Crapa" -- Gilligan described it as an old Milanese song - - sung by Quartetto Cetra and told him he'd be singing it. All Costabile knew was that his character Gale would be watering plants while doing the vocals. "They told me, basically, just go for it," he says. What viewers saw on the small screen was Gale singing and moving along with the Italians, not in a negligee.

2 The lyrics. "The lyrics [of this song] are insane," says Costabile, whose Italian heritage and basic "restaurant Italian" helped seal the accent. The jazzy, scatty "Crapa," because of its demonically fast tempo, is also a bit of a tongue-twister. The lyrics tell a desperate story: "Crapa Pelada made an omelet and didn't give any to his brothers, oh-oh-oh." Ditto his brothers not sharing their omelet with Crapa. And there you have it.

"There was something so clear about how the song -- perfectly out-of-the-loop idiosyncratic -- fit that character, so it was very clear how it would go down," says Costabile, who shies away from calling his character prissy. "Gale is 'particular' about many things in the world and has varied tastes," he says, noting that Gale's apartment contains a pair of skis, a surf board and even a picture of him on Mt. Everest. "The physical world was fascinating to him and he wasn't going to be boxed in by anyone." Gale's singing "Crapa" pretty much nails that assessment.

3. You've seen Costabile before. Unlike the relative newcomer Paré, Costabile is one of those everyman-looking actors you've seen -- in featured roles in The Wire, Flight of the Conchords and Damages - but can't place. Later this year, Costabile will be seen on the big screen in Steven Spielberg's Lincoln, portraying a representative sponsoring the 13th amendment which made slavery illegal.

4. The costumes. Here's where it gets interesting. Unlike Paré's Megan Draper who does housework in her skivvies, Gale is seen fully clothed, in flashback, in Breaking Bad's season 4 doing the karaoke rendition of Peter Schilling's "Major Tom (Coming Home)."

Costabile, a trained classical singer with a graduate degree in acting from New York University where he teaches, delivers Gale's excruciatingly earnest and gesture-packed version of "Major Tom," the jaw-dropping impact of which is matched only by what Gale is wearing: a neckerchief, flak jacket, bland short-sleeved shirt and a forward-positioned fanny-pack. (And could Mad Men's French 1-2-3-4 intro to Mrs. Draper's "Zou" actually be a reverse nod to "Major Tom"'s 4-3-2-1 chorus?)

5. "Crapa"'s impact on his career. Costabile isn't sure. Paré's "Zou" is available on iTunes, and his version of "Crapa" isn't. "But there's more premium being paid to singing on television, so maybe it takes time," he says. Too bad Gale, killed off, can't be part of a potentially growing trend.

"I miss Gale and loved how he was excited by the world," says Costabile. Of course, despite his refreshing innocence, Gale was indeed working for baddie Fring, adding a savory complexity to the character. "I didn't want to be dead, for sure." Fortunately, his songs live on.