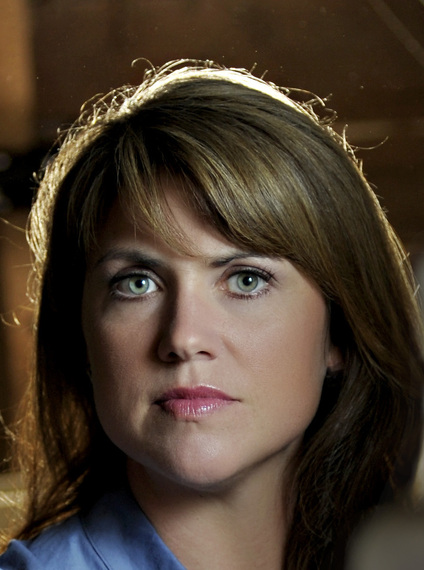 In Crash and Burn, Lisa brings back Tessa Leoni and Sergeant Wyatt Foster. Nicky Frank, a married woman, survives a horrific car crash on a rainy night off a desolate highway in New Hampshire. Though severely injured, she crawls up a steep embankment and flags down help, begging police to find her missing daughter, Vero. A massive search is launched. When Nicky's husband Thomas shows up, he drops a bombshell on the police: there is no Vero. He tells the police Nicky suffers from a brain injury sustained in two previous accidents, and has conjured the child from thin air. But as the detectives investigate, many questions arise. Is the child a delusion, or is she real and in grave danger?

How and when did you begin writing fiction?
I wrote my first book at seventeen. I was very lucky because it was published three years later. I started my career as Alicia Scott, writing romantic suspense novels. There was always a dead body and an investigation. I wrote seven or eight of those novels, and got more and more interested in suspense. I also grew more comfortable doing research and cold-calling detectives, prisons and morgues. The more research I did, the bigger the crimes became.

I came up with the idea for a standalone thriller called The Perfect Husband. It featured a serial killer who broke out of a maximum security prison. His revenge against everyone who put him there included pursuing his ex-wife. So, even back then, I was writing a kind of domestic thriller. That was my first Lisa Gardner book, and I've never looked back.

What made you begin writing at the young age of 17?
I didn't know any better. Seriously. I lived in Oregon. Had never met an author, editor, agent. In other words, I had no idea how hard it is to write a novel, let alone how impossible it is to get one published. On the other hand, I had an idea for a murder mystery. So I wrote it.

How did you manage to get published by age 20?
Once I started telling people I'd written a book, they asked when I was going to publish it. This was a new thought for me. But a good friend helped me find a book on how to get published. This was back in the early 90s when the paperback market was exploding, so demand for new voices was higher. I followed the steps for submission spelled out in the guide. Several years and several rewrites later, my first book found a home! I'd told friends when my book sold I was going to buy a Mercedes! Big successful author, right? First lesson in publishing: my book did sell, and I earned just enough money to buy a computer, and even then I had to wait for the computer to go on sale. But it was still absolutely amazing to hold the finished novel in my hands. It gave me goose bumps.

I understand that while writing your first crime/suspense novel, you were working in the food service industry. After your hair caught on fire a number of times, you decided to focus solely on writing. Tell us about that.
Like many novelists, at the beginning of a career, you're writing for love, not money. It took a good ten years for me to become an overnight success. (Laughter). I had many jobs; one was as a waitress at a Greek restaurant. They had an appetizer called flaming saganaki, which is deep-fried cheese over which brandy is poured and then lit on fire. It was the nineties and a time of really big hair. If you didn't pour the brandy properly, the fire could blow back and get onto your hair. It happened quite often. I got plenty of "pity tips" from patrons because of it. So, I'm really grateful every day that the writing thing worked out.

You once described your writing process as "out of the mist." Tell us what you mean by that?
I'm not a plotter. I do lots of research. It's one of my favorite parts of writing. I may know some key forensic points, but I don't like knowing what's going to happen next. If I already know who the good or bad guys are, then the reader will know, too. For instance, with Crash and Burn, when I began the book, I didn't know if Vero existed. I didn't know if Thomas or Nicky were good or bad. I prefer it when characters can go either way--good or bad. There's more complexity, and there are some secrets. One of the things that keeps me showing up each day and writing is that at some point, I want to know the answer.

You're known for doing a good deal of research. In fact, it's clear from Crash and Burn, you researched Post-concussion Syndrome. But you've also talked about the dangers of doing too much research. Will you comment on that?
I think doing research is the most fascinating part of my job. I get to speak with people who do really cool things for a living. You can surf the Internet and talk to experts, but at the end of the day, you must sit down and start writing. You have to produce a novel--you must tell a compelling story.

Speaking of research, I know you depend heavily on experts in various fields. Tell us about that.
The most fun I ever had doing research was cold-calling a body farm, an anthropological research facility. That was for the first Tessa Leoni book, Love You More. The novel involved skeletal remains, and I spent three days working with a forensic anthropologist. Other kinds of experts with whom I've worked have been physicians; boxing coaches; medical examiners; computer forensics experts; firemen; blood spatter experts; and firearms coaches. I've been to four or five different prisons. For Crash and Burn, I dealt with an auto accident reconstruction expert. Each book I've written has been a learning experience for me.

What would you be doing if you weren't a writer?
Probably some type of criminology. With all the research and consulting with experts, what's fascinated me most is the psychology of crime. What is the nature of evil? Is it inborn or acquired through the environment. Or is it a product of abnormal physiology, such as with the Texas bell tower sniper who had a brain tumor. I write fiction, but if I wasn't doing that, I think I'd be involved in criminology.

You're one of the most successful novelists working today. What has surprised you about the writing life?
It doesn't get easier. With thirty books written, you would think I'd feel proficient, but each book is painful in its own way. To paraphrase Dorothy Parker's observation: I don't know that I like writing. I know I like having written.

I'm always just feeling my way to that other side--the completed novel. I feel I'm forever gnashing my teeth and banging my head against a blank computer screen. (More laughter)

What do you love about the writing life?
I love that magical moment when it all comes together in a way I couldn't ever have imagined. I always think of writing as a giant leap of faith. There's that "Ah ha" moment when things just fall into place. Those days are amazing and precious. The art takes over, it all comes together, and I've actually completed a novel despite myself.

If you could have dinner with any five people, from the literary world or from history, living or dead, who would they be?
One would have to be Stephen King. He's my favorite author and an inspirational voice in my career. I loved his book, On Writing. I think he would be amazing and fun to talk to. I would like to invite Queen Elizabeth I, because she was a woman who ruled at that time in history; and because of everything she accomplished. I'd love to have Grace O'Malley, the pirate queen, and Elizabeth's arch rival at the dinner, too. Ben Franklin would have to be there. He was a great philosopher, thinker, writer and an inventor, too. And then, I'd love to have Sherlock Holmes to round out the dinner party.

Which authors do you enjoy reading today?
Stephen King, Karen Slaughter, Tess Gerritsen, Lee Child, Laura Hillenbrand, Kristin Hannah, and I read a lot of YA with my daughter.

Congratulations on writing Crash and Burn, an intriguing story that calls into question the reliability of memory and one's perception of reality.