Over the past few years, fast food chains have touted the benefits of their healthier options, especially for children. But are all those McDonald's Apple Dippers and Chick-fil-A Grilled Nuggets actually making a difference in terms of what kids eat? A new report from the Yale Rudd Center for Food Policy & Obesity might validate the skeptics among us: No, they say, and it could be the failing of both menu and marketing strategies.

Despite the addition of fresh apples, milk and other healthier concessions, researchers found that kids continue to eat too much saturated fat, sugar and sodium when they dine at their favorite chains. In fact, the report found that only 3 percent of kids meals met either of two industry nutrition standards, the Children's Food and Beverage Advertising Initiative and Kids LiveWell, reported Ad Age.

What's more, kids aren't choosing healthier options instead of unhealthy ones -- they're finagling for both. At McDonald's, for example, more kids are ordering apples than they did three years ago, but they are often getting french fries as well: 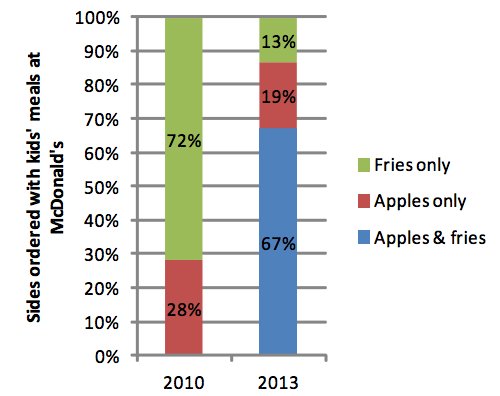 And while fries are certainly crave-worthy, it isn't just the taste alone that has kids jonesing for a fast food fix. As companies make baby steps toward healthier food, there is still this to contend with: Children are watching more fast food advertising than ever. 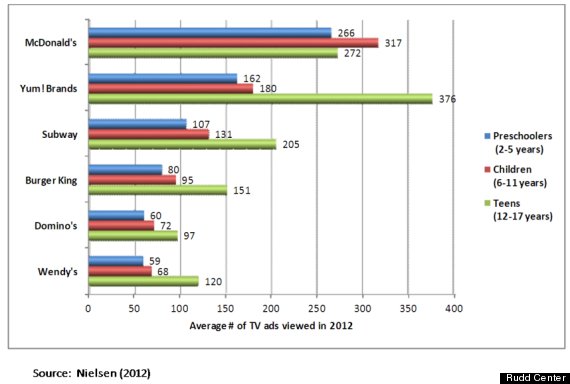 Based on the above Nielsen data, on average, U.S. preschoolers viewed 2.8 fast food ads on TV every day in 2012. Children aged 6 to 11 viewed 3.2 ads per day and teens viewed 4.8 ads daily. Moreover, six companies were responsible for more than 70 percent of all TV ads viewed by children and teens. Although healthier meals were among those advertised, they represented only one-fourth of the fast food ads. And while some restaurants, including McDonald's and Burger King, have reduced their ads targeting children, the Rudd Center found that many TV ads on network and nighttime television are viewed by children, even if they don't come on during children's programming. Ads run during Nick at Nite and ABC Family, for example, don't officially count as marketing to kids though they are viewed extensively by children and teens, the report found.

The current report is a follow-up to the Rudd Center's major 2010 study on fast food marketing to children and teens. At the time, they found that yes, fast food companies did market to children and they did it in a big way. (Hey, at least McDonald's is honest about how the chain makes the burger look so good.)

Currently, 16.9 percent of children and teens are obese, according to the Centers for Disease Control and Prevention -- a rate that has doubled in children and tripled among adolescents in the past 30 years. Television advertising may account for some of this difference, as recent studies show a relationship between paying close attention to television messages and excess weight.