Few things stir up childhood nostalgia as quickly as a fresh box of crayons. It's easy to see what makes them an appealing collectors' item. For Ed Welter, a former Nike project manager from Oregon, the allure went a step further.

No one, not even Crayola, had recorded a full history of crayons. So it became Welter's challenge.

As a devoted collector, he began focusing on crayons around 2000, soon after selling off an extensive beer-can collection. Welter gathered box after box, with some dating back to the 1880s. Old catalogs from libraries around the country (and, later, on Google Books) allowed him to cobble together a timeline. By 2014, Welter had amassed over 3,000 boxes of colored wax, about half of which were Crayola. Then he sold everything (Crayola purchased its namesake boxes while the others went to various collectors) and retired to Spain.

What Welter had discovered in his 14 years of collecting is that Crayola's color history is absurdly complicated. On his website, Crayon Collecting, Welter laments how singlehandedly piecing it all together was difficult not only "just from the sheer amount of detail, but also because of the convoluted swapping and renaming of colors." For example, the crayon which the company named "Blue" when it got its start in 1903 was not the same "Blue" by the 1930s. It was given a new name, which no longer exists today, and "Blue" became a brighter shade of the color.

Confused? It's okay. It took about eight whole months for Welter to piece together Crayola's history, which he described to The Huffington Post as "complex" and, pun intended, "colorful."

There are crayon colors that no longer exist today, many of them coming from old painters' palettes.

In essence, Crayola became such a hit because the company figured out a way to inexpensively combine paraffin wax with safe pigments, according to Welter. Colors in the early years drew from paints available from art suppliers at the time, and many of these shades have since dropped out of production.

Among the original shades that have been unceremoniously discontinued, according to Welter's research: Burnt Umber, Celestial Blue, Charcoal Grey, Cobalt Blue, English Vermillion, Madder Lake, Ultramarine Blue, Van Dyke Brown and Venetian Red. Raw Sienna lives on in name, but as a different shade of brown than its predecessor. Crayola officially "retired" Raw Umber in 1990 along with seven other shades. Still others have dropped out without so much as a goodbye.

Original Crayola shades that have been discontinued. Courtesy Ed Welter.

"New" Crayola crayons aren't often new, just renamed. By 2013, Welter had counted 755 color names that had ever been sold, but only 331 individual colors.

Special crayon boxes with colors like Iron Man Blue and Liberty Blue are just the plain old Blue you'd find in any regular box. Sweet Georgia Peach is really just Melon. Tye Dye Lime is Green Yellow. (Crayola might be on to something, though, for wanting to keep things simple.) 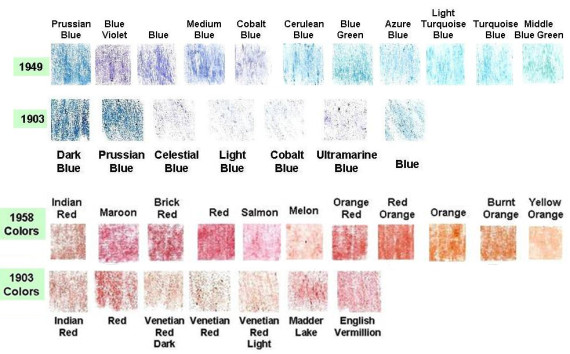 Crayola once issued a box with several crayons of the same color under different names.

"They pulled a fast one on everybody," Welter wrote on his site. Light Turquoise Blue and Turquoise Blue look identical, as do Dark Green and Green. And good luck figuring out the difference between Brilliant Rose, Medium Rose and Light Magenta. Or Medium Violet and Violet.

Certain colors have been renamed for political reasons, like "Flesh."

What color is flesh? According to Welter, it's the lightly pigmented, roughly universal shade we see on our palms -- like the Crayola crayon by that name. For most people, however, flesh refers to skin tone, and the problem with making one beige-y shade the only skin-tone crayon available is obvious. But until the early 1960s, Welter explained, the company hadn't yet realized how the name could cause consternation. A social researcher noticed children using the shade to draw people, teasing darker-skinned classmates who didn't match the crayon. Shortly after the researcher wrote a letter to the company in 1962, (after a couple back-and-forth years with the name Pink Beige, for some reason) the Crayola shade became known as Peach.

Indian Red was also renamed, though not until 1999. The name actually referred to a pigment from a plant found in India, Welter told HuffPost, and could have been tweaked to "India Red." To avoid misconceptions, however, the company chose a completely new -- and completely neutral -- name: Chestnut.

The Macaroni and Cheese crayon was named by a pasta-loving 6-year-old.

For much of the company's history, Crayola's crayon names were plain. Then in 1983, a new line for small children with names like Birdie Blue and Kitty Cat Black was introduced. Metallics, like Tiger Eye and Moonstone, followed a few years later with other specialty crayons. And, in 1992, the company opened up naming rights to anyone. Fans of all ages got the chance to name sixteen brand-new colors -- which Welter says were, indeed, not recycled from past boxes.

"I wrote a letter to Crayola (all by myself, a proud six-year-old), entering the contest," a grown-up Adrienne Watral told The Huffington Post in an email. When she found out that her submission had won a month later, the crayon company flew Watral's whole family out to Hollywood, showering them with "enough Crayola swag to last a lifetime." And the new orange crayon had a name: Macaroni and Cheese. "I remember being interviewed for various news stations on television and being asked how I thought of the name," she wrote. "This was the easiest question ... I named the color of my favorite food!"

Another famous color was named by a 12-year-old Sam Marcus, who drew small facial expressions to correspond with each new crayon. His "laughter" face was colored pink because, Marcus told HuffPost in an email, he'd blush when someone tickled him as a kid. Hence Tickle Me Pink was born.

We'd also like to note that Purple Mountain's Majesty was named by an 89-year-old Mildred Samson -- proving that coloring knows no boundaries.

Despite all the changes, Welter says the color quality has remained fairly consistent throughout the past century.

The biggest overall change, Welter explained, happened after World War II, when many of the pigment suppliers Crayola had been using for years could no longer sell to the company. Either the supply had been ruined or the business relationship had altered, putting the company in the odd position of finding new and ever-so-slightly-different sources.

"You know how people are with, 'Oh, back in my day, colors were so much richer!'" Welter told HuffPost. "But I actually colored on paper with all of them." By and large, there were only very gradual changes, like the new pigments and perhaps minor tweaks to different formulas. "Since the '60s, they've kept pretty true to their basic colors."

As for Welter, he now spends his time "virtually collecting" crayons by digging up information and fixing inaccuracies around the Internet. He warns that Wikipedia is particularly inaccurate when it comes to Crayola, but since the site does not allow contributors to cite their own research, the false information remains unchecked. It bothers him, but not enough to stop his efforts.

"When you're a collector," he said, "you're in it for the minutia."

Clarification: An earlier version of this post misidentified the social researcher who lobbied to change the Flesh crayon as a Crayola employee. She was not employed by the company.