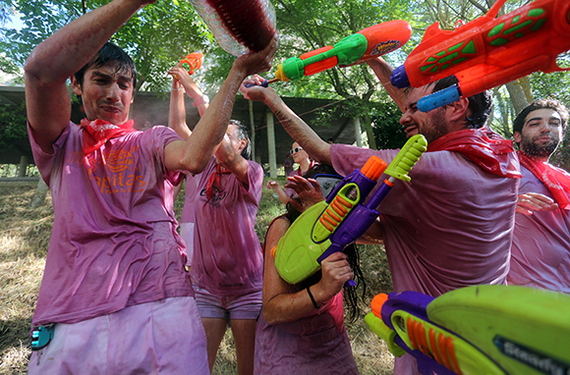 Spring is in the air, and the green food coloring is in the beer (and rivers) for St. Patrick's Day. We've rounded up some of the craziest drinking rituals around the world to celebrate, so pour yourself an adult beverage and open up our list.

Whatever you do, do not order a vodka and cranberry in Russia. Here, you drink vodka straight—never in a cocktail. It's always good to finish what you've started, which explains why, during a Russian drinking session, if a bottle of vodka is opened, it must be emptied before the end of the night.

And you thought breaking a mirror brought bad luck? Legend has it that if you don't follow the Czech drinking rituals, you will be cursed with seven years of bad sex. So be sure of three things when you're toasting: Maintain intense eye contact with your drinking companions, don't cross arms with any of them while raising a glass, and be careful not to spill any of your drink. Luckily, all of these rules only apply to the first drink of the night, so you can relax while imbibing after that.

We hope you like shots if you're visiting China. When toasting, the common expression is gan bei, meaning "dry glass," so you'll be expected to chug your whole drink in one go on the first toast. (After the first one, it's OK to sip.) Better make friends fast if you don't want to drink. It's considered rude not to imbibe during a toast—unless you can get someone else to drink for you.

If you've ordered a round of genever (a Dutch liquor) in the Netherlands, you'll get to see everyone perform a strange drinking ritual. This spirit is served in a tulip-shaped glass that is filled all the way to the top. To consume it, you must bend down and drink from the glass, without taking it off the table.

Respect your elders when drinking in South Korea. Etiquette dictates that you should serve people older than yourself before accepting a beverage. And when you down your drink, you must turn away from your elders to show some respect.

Good news for lazy drinkers: In Japan, it's considered rude to pour your own drink. (Although you'll still have to do some work, as you must return the favor by serving someone else.) Expect to have your glass topped off any time it gets close to being empty. So if you don't want to wind up too intoxicated, keep your cup almost full!

If you love vino, this custom will make you either weep for all of the wasted wine or immediately book a ticket to the town of La Rioja. Every year on June 29, La Rioja holds La Batalla de Vino de Haro (The Wine Fight). This all-night party involves climbing a mountain and engaging in a kind of water fight—except with wine! Trucks distribute wine, people bring water pistols and buckets full of wine, and everyone douses each other.

Read the original story: Crazy Drinking Rituals Around the World by Caroline Morse, who is a regular contributor to SmarterTravel.