While the Solange-versus-Jay Z altercation has taken the world by storm this week, it's definitely not the craziest thing that has ever happened in an elevator. Below are eight elevator rides that are almost too insane to be true.

1. Hall and Oates first met in an elevator after escaping from a gang-related gun fight. 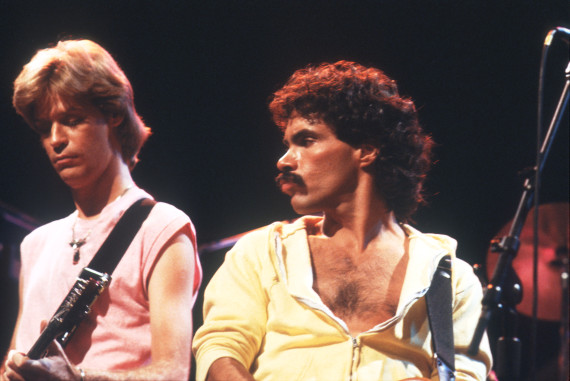 In 1967, the now-famous musicians were performing separately at a Philadelphia radio station music showcase when a gunfight broke out between rival gangs attending the show. It just so happened that the two, Daryl Hall and John Oates, both ran into the same elevator to avoid getting shot, and pop history was made.

There was a teenage record-hop held by one of the local R&B stations. We were both independently invited to go to this thing and lip-synch our singles. That's what you did in those days. You go onstage, they play the record, you pretend to sing. We were actually in the backstage area of this hall. It was in West Philly, bad neighborhood. It was the Five Stairsteps, Howard Tate, Daryl's group, and my group. We were all kind of waiting to go on. And this fight broke out. Guns. Chains. God knows what. Everybody running. And Daryl and I just went down the big service elevator. We got in and we went down to the bottom together.

2. A beach-goer got high on cocaine and then couldn't stop biting a hotel elevator door. He later fought a cop.

A 24-year-old staying at a hotel in Virginia Beach got so high on cocaine that he started biting an elevator door, before fighting the cop that tried to apprehend him. The cop described him as "out of control" when he found the man with his teeth locked to the door.

After being arrested, the beach biter admitted that the cocaine he injected was "crazy and bad."

3. A brother and sister were caught having sex in a Scottish train station elevator. Twice.

A 21-year-old man and his 17-year-old sister were caught having sex in the elevator of the Motherwell train station in Lanarkshire, Scotland. According to surveillance footage, the two had sex, left the elevator and then went back in shortly after to have sex again. Both of them avoided jail time, but had to go to court, where the man was sentenced to two years of probation and his sister was sentenced to one year.

The brother and sister have both blamed each other for the act. The sister later claimed she was drunk at the time and didn't remember the incident. The brother claimed she initiated and he "went along with it." 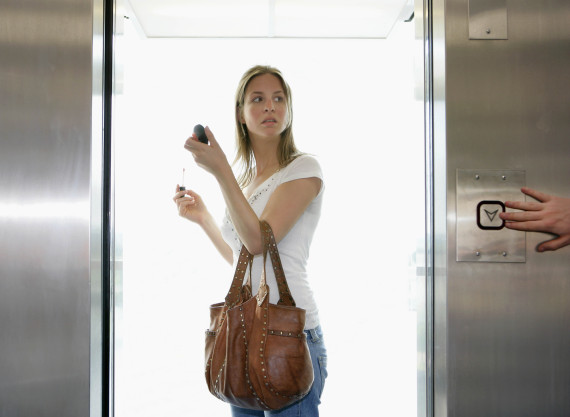 Maryland was plagued by a serial elevator flasher in 2013. The man would reportedly follow women onto a lift and then expose himself. Apparently, he had a consistent routine of dressing like a business man with draped laundry over his shoulder, which he'd remove to show his crotch parts.

Thankfully, the flasher ended up being caught by the police.

5. A woman allegedly took a dump in an elevator during a visit to a Florida courthouse. 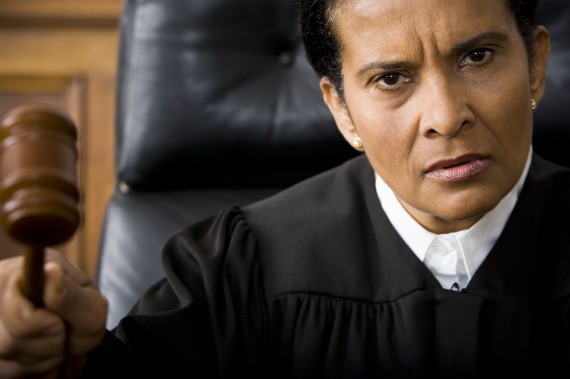 While at the St. Lucie County Courthouse in Florida earlier this year, a 49-year-old woman allegedly defecated in the corner of an elevator. Security cameras caught the act and the woman was apparently seen fiddling with her pants after exiting the elevator. This, of course, did not help her impending court cases.

Using elevators as bathrooms isn't all that rare, apparently. In 2013, a woman was arrested for allegedly urinating in a hotel elevator. After being confronted about the incident, she claimed her friend "had told her a funny joke that made her urinate onto the floor of the elevator."

6. A New York food delivery person was stuck in an elevator for 80 hours. Unfortunately, he'd already delivered his last order at the time.

Ming Kuang Chen, a New York City delivery person at the time, was stuck in an elevator for 80 hours back in 2005 without food and water. Unfortunately, Chen had already delivered his last meal before the incident. Security workers claimed they didn't realize there was a problem because Chen couldn't speak English over the emergency intercom. When he was eventually saved, Chen was apparently in fine condition and was only treated for mild dehydration. That said, the whole ordeal was a mentally taxing experience which caused Chen to claim, "I'm afraid to go anywhere dark now."

A similar thing also happened in New York City in 1999, when a 34-year-old production manager at Business Week named Nicholas White was trapped in his office building's elevator for 41 hours. White was just trying to go on a smoking break and ended up having to pee by prying the elevator doors open slightly. Although he could pry the doors open, he was stuck on a floor where the doors opened to a solid concrete wall instead of an actual opening.

7. Former Yankees owner George Steinbrenner had a beer bottle smashed against his head in an elevator and responded by throwing punches. 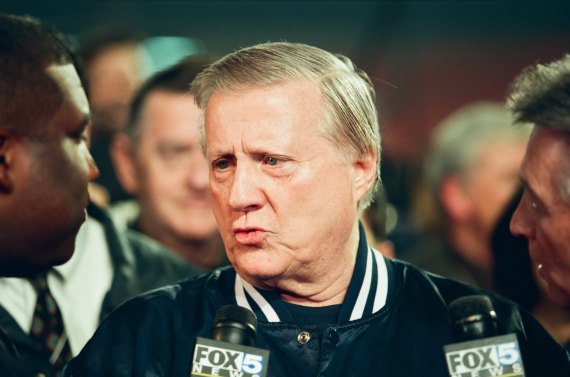 During the 1981 World Series between the New York Yankees and the Los Angeles Dodgers, then-Yankees owner George Steinbrenner was assaulted in a Los Angeles hotel elevator. The night of the assault, the Yankees had just lost their third straight game to the Dodgers. Steinbrenner was alone in the hotel elevator with two drunk men when they began insulting him, which led him to respond with some sort of obscenity. After Steinbrenner spoke, he was hit in the head by a beer bottle. The 51-year-old then threw three punches and apparently knocked down the Dodgers fans.

Steinbrenner held a midnight press conference that day, saying, "I clocked them. There are two guys in this town looking for their teeth and two guys who will probably sue me." He was never sued.

8. A woman survived a 75-story fall down the Empire State Building's elevator shaft after a plane smashed into the building. 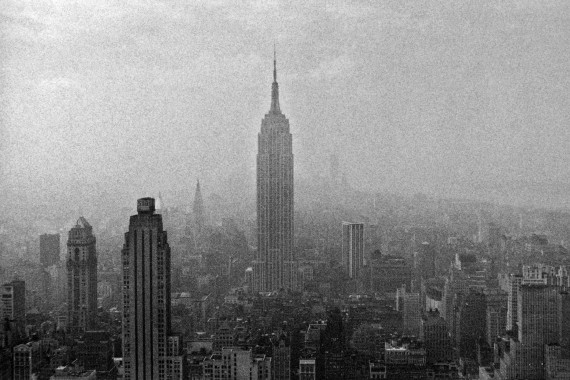 A U.S. Army B-25 bomber smashed into the side of the Empire State Building on July 28, 1945. The crash left 14 people dead, including the pilot, who had accidentally flown into the then-tallest building in the world due to intense fog. One person who didn't die, however, was a 19-year-old elevator operator named Betty Lou Oliver, even though the crash caused the elevator cables to snap, plunging her 75 stories to the sub-basement. Her pelvis, back and neck were all broken, but she was alive.

BONUS: A "hunk" becomes a human chair with a heart of gold. 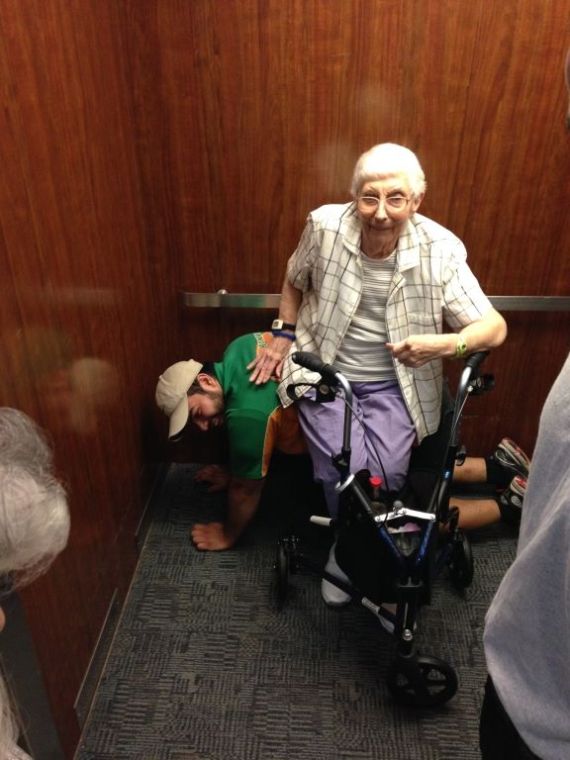 Earlier this year, "Hunk" Cesar Larios, an employee from the College Hunks Moving Junk, got stuck in an elevator with an elderly woman who said she couldn't stand for long periods of time. Larios offered himself as a human chair to help her make it through the ordeal.

The response to the picture is mind blowing. Thousands of people are sharing it and posting it on social media," Friedman told HuffPost. "I think what's great about it is that it's a genuine moment caught on camera. A lot of people say the younger generation has lost certain values. But one small picture shows that chivalry and hard work are still very much alive in our youth.