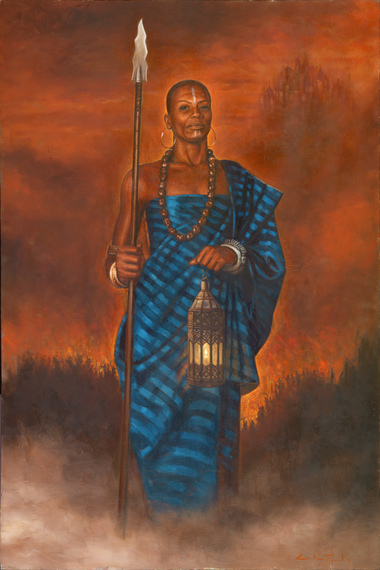 Griot -- cover for Sisters of the Spear. Painting by Andrea Rushing. Used with permission.

As I write this article, President Obama is a neighbor, just some miles down the road.

Meanwhile, in my old age, intimate with infirmities, I have decided to create an original opera specifically for Martha's Vineyard, nature's poem. It is entitled 1854 and is inspired by an 1854 petition from an island abolitionist group of Edgartown families who were asking the Federal government to enable the continuation of a congressional debate to abolish slavery. The executive branch, in the hopes of keeping the union together, had shut down consideration of such a notion.

A musical project of this breadth is a long, enduring, sometimes tortuous path. First, one must contract with the right composer who has the flexibility to create a wide range of musical styles. Then, it must be historically and musically researched in detail. Each stage of development must be workshopped in order to see how it plays. A choreographed language needs to be created and taught. Decisions about instrumentation (or not), arrangements and so much more need to be addressed.

What makes this project even more interesting is that I live in a community that personified contradictory currents of thought regarding the institution of slavery in the mid-19th century. Indeed, this island embodied the conflicts ongoing throughout the country. As a former major slave market, there were many families who were pro slavery; many who were abolitionists. As in the rest of the country, island families were sometimes divided amongst themselves, often along generational lines. I plan to manifest these conflicts through music, text, dance and design in the form of a town meeting. There will be four choruses, representing three musical styles. Townspeople ("Citizens' Chorus"), Whaling Captains (on stilts), Board of Selectmen and a Freedom chorus that consists of freed slaves. 1854 will be designed for a specific church called the Union Chapel, a beautiful 19th-century, octagonal building with a perfect center of acoustics. It is located in Oak Bluffs, a well-settled town on the Island.

This opera requires not only being produced, but is, in itself, a community organizing effort. My aim is to enable this piece to be embedded in the cultural life of the island. In that respect, I hope to make it a part of one semester's curriculum in the local high school and to present small parts of the performance in some of the island libraries.

1854 will be a rare opportunity to not only entertain, but also empower its audience. Most people are not aware of the contradictory historical components that went into the original petition. As previously mentioned, Martha's Vineyard was a slave market in the 17th and 18th centuries, fueled by the very powerful Whaling industry centered in New Bedford, as well as on the Vineyard and Nantucket. Simultaneously, we can document at least one part of the island (Gay Head, now Aquinnah) being used as a stop on the underground railway, as law enforcement and whaling captains licked their chops at the opportunity of returning escaped slaves to their masters for the bounty. By the start of the Civil War, slaves in the South were said to be worth $4 billion dollars (mid-19th century value). However, it is necessary to note that not all Whaling Captains participated in the bounty hunt. One, in fact, was an abolitionist who signed the petition upon which this opera is based. There is a second part of the island rumored to also have been a stop on the underground railway and that is at the tip of Chappaquiddick next to its lighthouse. The Vineyard has always been and remains a small island, home to a sparsely populated, predominantly rural population. I can imagine in the mid-19th century on some level everyone knew everyone else. Even today, during the off-season if you sneeze down-island, someone up-island will say gezundheit.

Although Massachusetts was admitted into the union as a "free" state, I have unearthed evidence of the buying and selling of slaves amongst island families as late as 1797, nine years after its inclusion in the union.

New England town meetings can often be passionate affairs. Imagine how this one would have been conducted. One can assume that freed slaves remained on the island to raise their families and took their place in society as much as they were allowed, side by side the descendants of their former masters. It is true that the Vineyard, amongst many distinctions, is one of the oldest African American vacation communities in the U.S., but racism still exists and this bigotry can be traced directly to the previous existence of slavery. In this regard, the island is not exceptional. Visualize how vociferous the Whaling Captains must have been regarding this issue. In 1854 (the opera) they literally invade the town meeting, walking on stilts, towering over everyone else, while loudly proclaiming their musical opinions. Thus their overwhelming physicality befits their status in the community. I should add that the maritime trades during that time were populated with freed slaves who were not afraid to take on the tough life of a seaman.

In this town meeting, the audience will share the same space as the Citizens' Chorus. Thus, they will be in the center of musical, choreographed streams floating in and around them. Nevertheless, they will be spectators and not participants. This is sometimes called "environmental" theatre and island audiences are not familiar with this form of performance. As a result, presenting in this format may be a challenge. However, it is a theatrical form that my generation created and I was a strong proponent of such performances having its antecedents in the "happenings" of the 50's and 60's. One other challenge is creating the choral presence of escaped slaves surreptitiously witnessing this meeting in the balcony, not visible to the audience downstairs, yet having a profound influence on the musical score. They are invisible until the very end of the piece when a mirror is lowered to reflect both the audience and escaped slaves in the same frame. All of the music will be based on the music of the day, whether that be slave shouts and chants, popular mid-19th century American songs or whaling songs.

But in the end, this is an experiment on how can a work of art be given birth deep within the consciousness of the community upon which it is based. Thomas Hart Benton famously documented residents of Chilmark through his brilliant paintings. I hope to provide, through performance, further documentation of the island's intriguing citizens. Us year-round residents refer to the Vineyard as "The Rock" due to its isolation and cold environment especially during the off-season. So the question remains, how do you plant in granite? Stay tuned.

If you wish to know more about the development of 1854, click here.