The following is an excerpt from, Social Movements for Good: How Companies And Causes Create Viral Change.

By the time Mallory Brown, founder of World Clothes Line, returned from her first study-abroad experience in college, she realized she'd caught the travel bug, and it wasn't going away. She spent half of her senior year traveling the world again, backpacking through places like Indonesia, Thailand, and Southeast Asia. 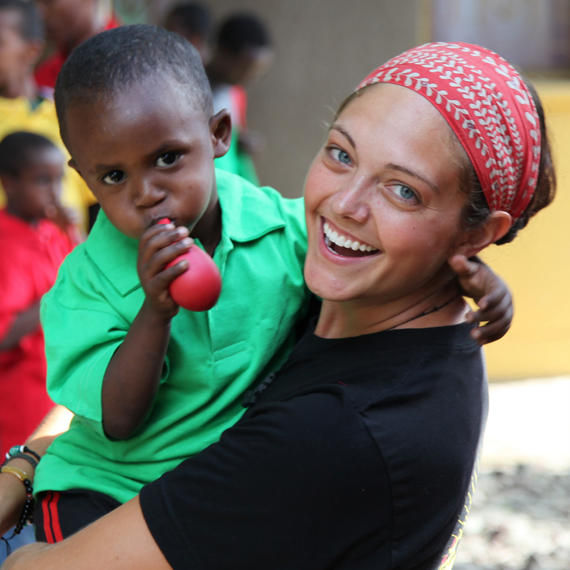 These trips were different from what she had witnessed in countries in Europe. She saw firsthand the inequalities that existed in the world, including children and families struggling to have food and clothes, the bare essentials we take for granted.

She realized that the life she had was much more privileged than most, even though she would be considered by many in the United States as a broke student just getting started in her career.

When she was 24, she started a social enterprise called the World Clothes Line. Her inspiration came from one of her trips. Like so many of us, she brought with her a bag of clothes filled with typical items and necessities. When she encountered so many people on her trip, she realized they needed clothing. It was on that trip that she started to give her clothes away to those who needed it more than she. That was the beginning of what would ultimately become a movement for basic needs in the world.

The concept of World Clothes Line is fairly simple. An individual buys clothes from the website; the company then provides a similar item to someone in need in another country chosen by the consumer, and then Mallory and her team personally deliver the clothes in person. This model allows the individual to participate with Mallory as a partner and supporter rather than just give without knowing what happens in the end to the person who receives it.

Embedded in the model of World Clothes Line is Mallory's global view. From her perspective, whether you are in Asia or Africa, the issues there affect her as much as the issues in Detroit, where she lives. She is trying to help others see how the world is a lot smaller than people really realize. It is possible through the videos that she produces to help consumers witness the act of giving.

Mallory turned to Crowdrise to start campaigns that could help the families she encountered. But the twist to the campaigns was that she would raise money and then immediately go to work. Her model was to highlight a family or situation in another country, provide basic needs, film the experience quickly, and then return to her donors to help them immediately see what occurred. Using the Crowdrise campaign platform, she was able to tell friends, share the experience with her consumers, and spread the message through social media.

The feedback mechanism of the impact was not typical. As for most campaigns and nonprofit organizations, it takes months to hear back how the individuals were affected--but not in this case. Mallory didn't want people to feel that their money was wasted or forgotten. To maintain the excitement of giving and being philanthropic, she used video and urgency to her advantage.

One of Mallory's first campaigns was for a family in Haiti that suffered greatly during the devastating earthquake of 2010. A single mother named Chantale led the family. She had five children and had to abandon her home and take them to a settlement for disaster victims. Chantale and her younger children were part of the 30,000 families in the settlement that didn't have any clean water, electricity, or proper sanitation. Chantale's oldest son, Jacky, was separated from her during the earthquake, taken by a wealthy family, and eventually forced into slavery.
He finally escaped, living on the streets and sleeping in abandoned cars. Eventually, Chantale would reunite with Jacky, but they still lacked the necessities of life to get started.

To help, Mallory and her team created the 86,402 Campaign. She was already on the ground in Haiti when the campaign started. This meant that she would take the money raised and immediately spend it to help Chantale.

The campaign started with a $5,000 goal, and in 24 hours, raised more than $10,000. She went immediately to work and videotaped the whole experience, sharing what was going on and sending the video back to the donors.

This whole process was so immediate that it sparked more and more campaigns focused on helping while on the ground and reporting back to donors. In essence, donors would give today, and tomorrow they would see how families and individuals were affected.

Mallory is raising money and donors. People she has never met before are hearing about how Mallory can help, and are immediately shown the impact of the gifts that come through and support the families and real people she encounters. The combination of giving now to people while immediately witnessing the power they have to transform lives resonates. Shooting raw footage on the ground to show people what is happening is important, and it makes people feel like they are with her, every step of the way, in real time.

Of course, she realizes how emotional it is for people to support other people. When connecting a story to someone without the basic needs we take for granted, a natural connection is created. That connection can be reinforced when there is more immediacy in both the story and the response. Engaging an audience to her is not about simply asking and telling a new story later, it is about sharing the powerful role someone can have on someone else now.

Mallory believes strongly that to inspire people, you have to open their eyes to the issues and possibilities. It is not about covering the hurt, but rather the opportunity that exists. For this reason, she has expanded into other issue areas such as homelessness and veterans' issues. Her model of tackling an issue within a 24-hour period, being on the ground and showing the donor how he or she can make a difference can be applied in so many other situations.

Mallory has learned a lot from her experiences so far as a social movement builder. She realizes that she gets the opportunity that most people don't get of being on the ground and being a part of something to witness firsthand. She knows that there are many great people out there who want to be a part of something. When willing to support something, present it in a compelling way, and show immediately what can happen, people will follow. Her comments about her experiences reflect the great opportunity and spirit of a new generation of social movement builders:

Go out and explore. Take an attitude of fixing things when you see them. Experience them and understand them. Approach things as you want to accomplish them. That will make the world a better place.