Often times in our busy lives, we seem to take some of the important things for granted. It seems to be that more and more each day, the connection between us and our planet earth drifts further and further apart. Not only does the earth provide us with everything we need to survive, like air to breathe and material to build our shelters, but it also provides us with inspiration for art. The complex beauty of nature has inspired many artists whether it is the array of colors in a sunset or the natural geometry of a pinecone. Some take the beauty and transpose it into an entirely new medium such as a canvas, wall or sculpture; however, some artists actually manipulate nature and turn it into art. This is most commonly called "Land Art," yet also referred to as "earth art," "earthworks" or "environmental art." 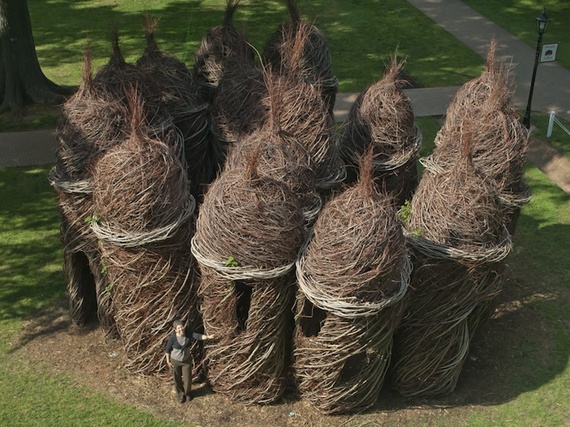 Art that functions on multiple levels is important to our world. It is something that is pleasing to the eye, but also something that portrays an important message. Although each land artist's work contains its own unique message, the whole field of Land Art possesses an underlying message of reconnecting with nature. By creating art using the land, one is almost forced into a much deeper level of connection. Just as an artist who uses paints and a canvas becomes much closer to the materials they are using, so does the land artist as they use leaves, pinecones, wood and ice, thus reintroducing that long lost connection with nature that our species once had many years ago. For the viewer, a deeper connection is also offered as they are reminded of the inherent beauty that exists in nature.

Land Art first gained popularity in the American West in the '60s and '70s. Many environmentalists started to paint landscape paintings in order to feel that deeper connection with the landscape with hopes of inspiring people to feel eager to save it. However, in order to really inspire people, a more public approach needed to be taken.

Michael Heizer was one of the first artists to create Land Art. He is most well-known for his giant project in the Nevada Desert entitled, "Double Negative." It consisted of a 1,500-foot-long trench, which was naturally created by the displacement of rocks. On either side of this long trench are two manmade trenches, thus it consisted of two negative spaces, one manmade and one naturally occurring. Heizer saw the beauty in what was not there, for it was the negative space that made the piece what it was. This giant piece, which obviously could not be moved, was one of the first that made people question, "What is art if it cannot be put into a museum?" Thus, Heizer became an innovator of public art and also forced people to look deeper at nature. Today, this piece is owned by MOCA. 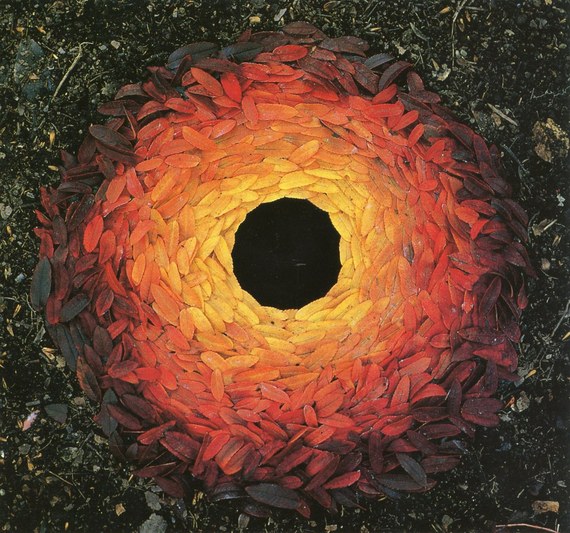 Andy Goldsworthy took this new idea of land art to a smaller and more feasible level. Every time you are on a hike, and you see some rocks balancing on top of each other, you have Andy Goldsworthy to thank, as he is known as the first to start the worldwide fad of rock balancing. His simple and ephemeral works of land art are created using anything that he can find in his surroundings, thus truly site specific pieces of work. He wanted to be able to connect with nature as directly as possible, so he starting creating art by balancing rocks, placing leaves together in a pattern, or molding icicles formations. Machinery was never used in his pieces besides for a rare few that were public commissions. Spit holds the leaves together, mud helps the rocks to stick, and the heat of his hands melts the ice into his desired shape.

The beauty in his art exists in its ephemeral status. Because real tools or manmade products were ever used, nature would often take its course in destroying the art whether it is a gust of wind, the growth of a plant, or heat causing the ice to melt. Goldsworthy believed that nothing can or should last forever. His deep work with nature obviously helped him to recognize the impermanence in all things.

Patrick Daughtery also believed in the impermanence of his land art. He specialized in creating art that looks as if it was found rather than made. Daughtery was inspired by nests, animal lairs, cocoons and hives which he found in nature. He would often interweave sticks and twigs together in order to create these nests -- never worrying about how long the art would be maintained.

Other land artists prefer to work on an even more delicate scale. Artists Walter Mason and Richard Shilling specialize in art using leaves. Walter Mason created very intricate and ornate carvings into leaves and often leaves them in specific patterns based off the color. 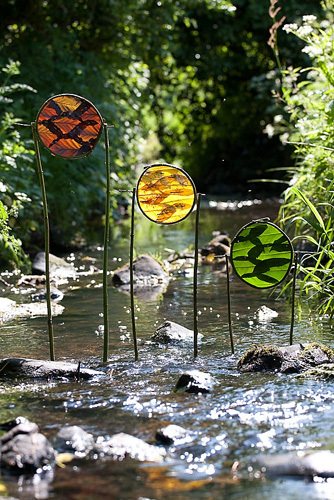 Richard Shilling often incorporates the use of geometry into his art as he places leaves together with sticks, often resembling mandalas. He prefers to use colors that represent the flux of the seasons. Both of these artists take small, usually unnoticeable things, and turn them into true pieces of art. They succeed in not only creating admiration for the talent of the artist, but also a deeper look at an ordinary part of nature that too often goes unnoticed.

Martin Hill and his wife Philippa Jones are modern land artists who seek to create their art on an even deeper, more metaphorical level. They travel around the world to beautiful remote places creating semi-circles made of ice, stone or twig tensegrity techniques on top of bodies of water. Through the use of a camera, they capture the piece at the perfect time when the reflection on the water creates a full "circle of life." The photographs require a very calm reflection on the water in order for the circle to become perfect and complete. 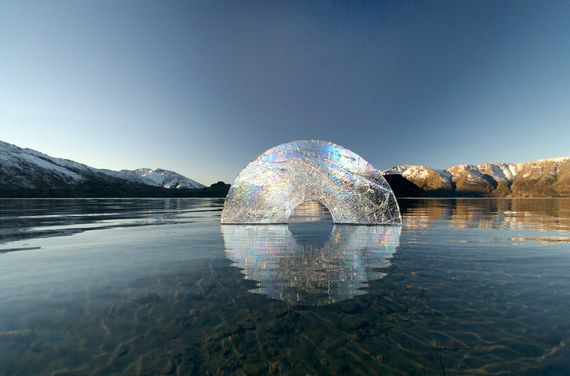 They serve as a metaphor for the interconnectedness of all living beings and the cyclical nature of life. Hill and Jones aim to promote sustainability through this reinforcement of this closed loop, hopefully influencing the ways we design products and create processes. This closed loop design results with no waste, just total recycling. The man-made semi-circle is completed with a naturally made reflection, serving also as a metaphor for our connection with the earth, and the beauty that can be realized if that connection is created in a calm and peaceful manner.

Cornelia Konrads is another amazing land artist who creates site-specific installations in public spaces. Her work has a common theme of the top portion of the structure to seemingly be floating into the sky. She uses stones, sticks and other natural materials, putting them into "piles." The tips of these piles slowly lift up as if some gravitational force is pulling them up and away into the sky. Her pieces bring to the viewer a sense of magic back to nature as they mystify with their floating tufts.

These artists have all created beautiful pieces of work through the use of natural materials. Some land artists, however, seek to create land art that is not just made of live materials, but is also truly living. There is an artist collective in Germany, who go under the name of Sanfte Stukturen, and focus entirely on living architecture. They create domes, altars and palace-like spaces made entirely of living willow trees. They build them using ancient Sumerian building techniques and the results are reminiscent of whimsical structures you might find in fairytales. Since these structures are living, they will grow and change over time. They have built over 70 of these structures around Europe in various parks, forests and museums. 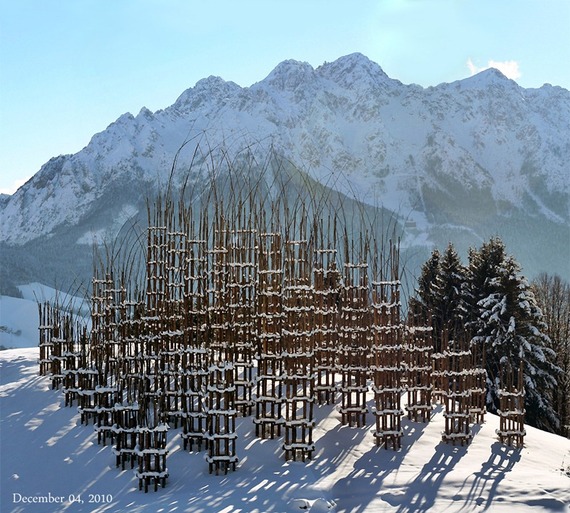 Giuliano Mauri also used this technique of creating a living sculpture with his "Tree Cathedral," which was finished in 2010 in Italy. This 90-foot-long, 80-foot-wide and up to 70-foot-tall "cathedral" was created entirely with living trees. Mauri had a vision of the piece transforming into something complete organic and new over time, so he also planted 80 Hornbeam saplings inside. In 15 years, the piece will have be entirely novel. The title of this project is based of the spiritual connection that one can feel with nature. This is not a real cathedral obviously, yet it offers viewers a place that truly looks and feels sacred.

This type of art has been so inspiring that there has even been entire organizations centered around it. The Land Art Generator Initiative is one of them. They seek to promote sustainable design solutions by integrating art with renewable energy infrastructures. This organization is currently asking for entries for their LAGI 2014 Design competition. They are looking for entries that utilize public art into something that can also create clean energy. This is a little different than the land art, which was mentioned before, yet it is still drawing the attention back to the earth through the use of art. They, however, seek to do this in a more productive way. Ideas are welcomed to be submitted up till May 18.

This type of art offers an entirely new way of interacting with nature and truly does create a relationship between the artist and the earth. In modern times, this connection is vital to our future. I believe that art really can change the world. Both art and nature are purely inspirational. Put together, they might possibly provide us with the key for a bright and long future.