Creating the Bat takes just a short peek into this never-ending process, asking five -- or, in this particular case, six -- quick questions to the creators who have helped to make the Batman what he is today.

Norm Breyfogle got his start in the comics industry in 1984, not long after graduating from college (and after pulling such stints as designing a training manual for the space shuttle program). Initially putting his mark on such books as American Flagg and Captain America, he landed his dream job, drawing Batman, starting with Detective Comics in 1988.

His Bat-tenure proved to be a formidable one, including the launch of two monthly titles that were started especially for him and longtime writing partner Alan Grant: Batman: Shadow of the Bat in 1992 and Anarky, based off of a character the two created years earlier, in 1999. He helped introduce the third Robin, fashioned a number of new Bat-villains that still pop up to this day, and even progressed to co-plotter as well as penciller, inker and painter.

Breyfogle initially left the Bat-family in order to pursue other projects, including a comic character he himself created, before returning to pull off a few more memorable stints with his first love, including, most recently, Batman Beyond Unlimited. 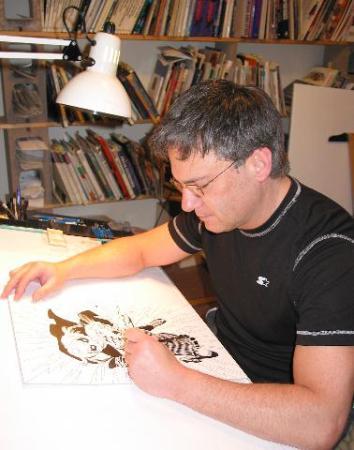 Having been a big Batman and comics fan all my life, I found that to be an easy "balancing act." Many years before I'd turned pro, I'd already internalized, on an instinctive level, what was do-able in mainstream comics, and with Batman. I was very familiar with the many interpretations that varying artists had given Batman over the years, and I knew what my favorite takes were, and I let my love of the character -- and the scripts -- guide me in the rest.

If I had to choose one specific thing alone, I'd say it's his cape; it's a wonderful design element for an artist to play around with -- very expressive.

If I could be more general, I'd say it would be a toss-up for me between his human-level physical activity (his martial arts and acrobatic mastery) or his "dark archetype" quality -- the gothic noir aspect of his appearance and environs (including his cape).

That's an interesting question, one I don't recall ever being asked before! It's difficult for me to answer, because I haven't sensed any pitfalls for myself in that regard. But, thinking hard about it, I guess I can see a few possible "pitfalls":

1. Being typecast as a Batman artist or as a comics artist in general.

2. Not having much opportunity to draw high-powered, blockbusting, super-powered scenes, because Batman is such a human-level character.

3. It could be a problem if an artist either went overboard with the exaggeration of the gothic noir elements, or:

4. If an artist drew Batman too much like a normal guy wearing a costume.

But I'm really reaching; I personally never really saw any "pitfalls" to drawing Batman. For me, it was a dream come true. 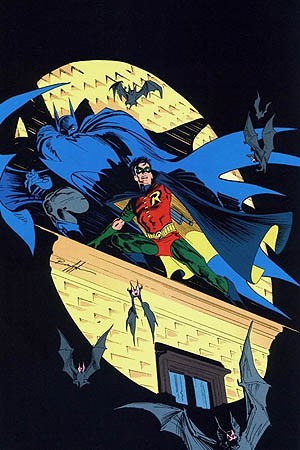 You helped introduce a number of new characters, particularly villains, during your run. Is this, you think, the greatest part of your Bat-legacy?

I suppose that's the case. In fact, I've often said so myself. And it's funny because, at the time of their creation, I more wanted to draw the traditional Batman rogues gallery characters, because I'd grown up with them. Now, of course, I see that Alan and I carved out a much greater niche for ourselves by creating a number of new, long-lasting Batman villains.

What's it like having an entire Bat book essentially created for you?

It was an honor. Of course! [laughs]

Let me add this: the only regrets I might have about any of my work on Batman all stem from my own shortcomings; I wish I'd been a more developed artist than I was at the time. But things are what they are, and they aren't bad, so I can't say that I'd risk changing the past, even if I had the ability to do so!

Speaking of which: are there too many Bat books?

I don't know. I don't have an opinion about that. All I've ever cared about is quality, not quantity.