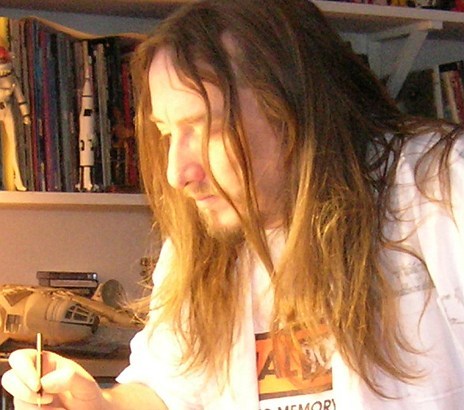 Dave Taylor is a British illustrator who's seen more than his fair share of projects -- and his roles on them -- over the years; he co-created Gene Dogs at Marvel, drew Judge Dredd for 2000AD, and has served as a concept and/or 3D artist at the likes of Warner Bros. and, even, Sony Computer Entertainment America. He's storyboarding and helping to research a film and television series concerning the Rendlesham Forest UFO incident and is currently handling drawing duties on Image's Prophet.

Taylor, however, is arguably best known for his work on Batman, which has included penciling duties on such titles as Shadow of the Bat (with Alan Grant), Detective Comics (with Chuck Dixon), and Legends of the Dark Knight (with Denny O'Neil). His five-year stint with the character may have ended in 2000, but that hasn't stopped him from returning in various one-off projects, including a story he is both writing and illustrating for the next wave of the Batman: Black and White anthology series (2014) and, most especially, his much-lauded work on the Batman: Death by Design graphic novel (2012).

Can you talk a bit about the balancing act between staying visually faithful to a character who's been around for 75 years while trying to put your own stamp on him?

I really don't have a problem with this, as I have no ego! In place of an ego, I have a very low opinion of my work -- like most traditional artists, it seems -- so when I draw Batman, I approach it with a deep respect for the character, his history, and those creators that have come before me. My Batman is a simple mix of my cherished memories of watching the '60s TV show as a kid and the wonderful work of Jim Aparo, who, when working on Shadow with the great Alan Grant, I discovered and fell in love with.

Drawing such a world-recognized icon is the biggest thrill -- a genuine honor and a huge challenge, which I welcome. That also answers the pitfall question -- everybody's watching every line I make! The mass of Batman fans are all watching me work. I feel their eyes burning into the back of my head. Get out of my studio! 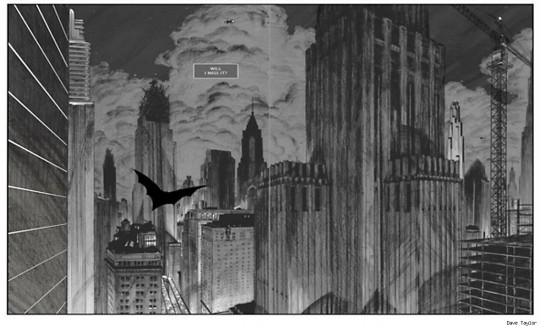 You recently came back to Batman after a decade absence. Have you noticed any significant change in your approach to -- or connection with -- the character?

For sure. I'm never very confident, or certainly not over-confident when I'm drawing icons such as the Batman, but I noticed my confidence had grown somewhat over the course of my decade absence from the industry. I'd gotten very ill, had a life-saving operation, and spent the time while recovering giving my life some very serious deep thought. I accepted my shortcomings, my weaknesses, and started to work on them in my mind, so that when I finally was able to sit again at my desk, I was more than ready to "begin again" (but not in an off-world colony), approaching my re-launched career with fresh and improved eyes and consciousness.

How different do you think Batman would be if he were published in the British industry as opposed to the American?

Oh, man, I'd love to see that happen! No disrespect to DC and the good folk who help to create the character, but what an experiment that would be.

For starters, I'd imagine he'd lose some of his aggression and become, I dare say, a little less interesting to the mass market. He might return to his detective days -- much less beating up, much more racking his big brain. But then, it's really been done many times. For instance, when Alan and I were working together on Shadow of the Bat, the product was basically British, with only an American colorist and editor. I dig the idea of a British-born Batman; Alfred then would be a retired American Navy Seal, both helping rid the streets of London of crimes, such as spitting on the pavement (sidewalk), drunken brawls, and Masonic murders, all with no guns in sight! Bruce's parents will have had to have been stabbed, not shot to death.

If this hasn't been done before, and please excuse my lack of historical info here, then I'm calling dibs on this concept -- it's my idea, and I want to write and draw it!

Are there too many Bat books, including original graphic novels?

Yes. We need to start burning all those old issues -- there are millions of them!

Seriously? You can never have too much of a good thing, and the more you produce, the more chance of producing some diamonds. I don't know -- it's an odd question, really. It's like saying, "Do we produce too much food or too much entertainment?" Maybe if we did stop producing too much entertainment, we might actually start to find the time to fix our planet's many-faceted problems, starting with government. Oooh! Political! That won't go down well!